Doctor Who: Last Of The Gaderene - A Book Review

Declared redundant after an unfortunate round of budget cuts, the aerodrome in Culverton was quick to find new life.  Bought up by the mysterious Legion International, the company's Miss Bliss promises a new era of prosperity for the quiet village. And who knows?  Perhaps someday they shall have an international airport to rival Heathrow!

Retired Wing Commander Alex Whistler is suspicious of Legion International and doubly suspicious of Miss Bliss.  And that was before he saw soldiers clad in black uniforms and too-wide smiles stomping around the town!  Thankfully, Whistler is not without friends and one of them is Brigadier Alister Gordon Lethbridge-Stewart of UNIT.

In short order, The Doctor and his assistant Jo Grant are on their way to Culverton, little knowing what oddities await them.  For sinister forces plot the invasion and colonization of the Earth and they've sought the aid of a familiar foe of The Doctor.  The last of the Gaderene are on their way... and even The Doctor may not be able to stop their arrival. 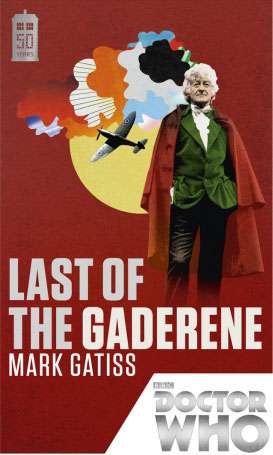 Mark Gatiss perfectly captures the Third Doctor era of Doctor Who for good and for ill.  Last Of The Gaderene is a ripping yarn but not a particularly deep one.  Like many Third Doctor stories, it is high on action and low on emotional depth.  There's no real surprises and only newbies to the series will fail to guess who The Gaderene's ally on Earth is long before they are revealed.

It's somewhat vexing as one feels Gatiss could have done so much more with this story.  Numerous minor characters are introduced only to have their stories cut short as their bodies are taken over by The Gaderene.  Only Wing Commander Whistler is given any true definition and even he seems like the stock Action Grandfather figure so common to the Doctor Who stories of the day..

One wonders if Gatiss intended to write more but was forced to cut his story short.  Numerous passages hint at things to come that never arrive, such as Jo's worries that The Doctor will soon abandon her now that his TARDIS is fully functional.  Likewise, The Doctor briefly considers the conflict between his new-found wanderlust and his desire for the companionship of his friends at UNIT but nothing comes of these thoughts.

That being said, Last Of The Gaderene is enjoyable for what it is and well worth reading if you're a Third Doctor fan.  Or indeed any kind of Doctor fan.