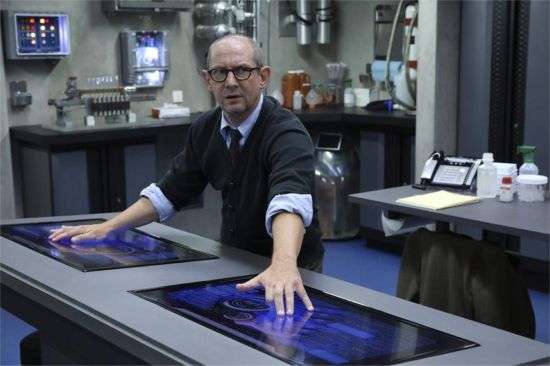 Sarcasm and commentary, as the show plays. Here is the archive of what I said on Twitter.

0:02:  Uh oh. Trucker. Plot involves people becoming invisible. Is this a remake of Riding With Death?

0:15:  Drinking the wine the kidnapper just gave you.  Not a very smart scientist, is he?

0:25: Oh geez... an abusive childhood.  Did this become a DC Comic villain's origin all of a sudden?

0:29:  And nobody notices the woman talking to herself in the middle of this well-lit party?

0:31:  This speech about government interference in big business sounds better when it isn't given by Rick Perry.

0:32:  Why does Skye's diction sound less natural when she ISN"T parroting a script over her headset?

0:40:  "Saying his name repeatedly does not increase productivity!"  Line of the episode.

0:43:  More excitement in this Hobbit trailer than this whole episode before now.

0:52:  All snarking aside, the gravity effects are pretty cool.  Kinda reminds me of The Prisoner.