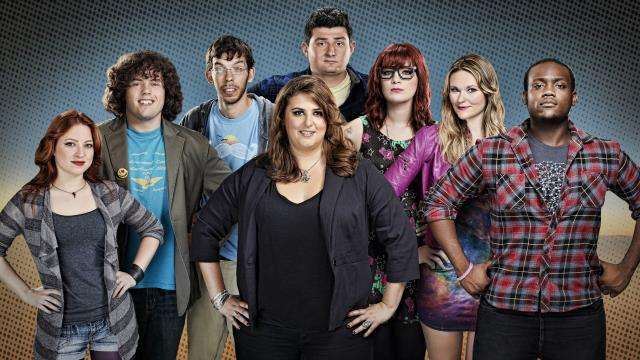 I'll admit that I wasn't looking forward to SyFy's Fangasm.  I dislike Reality TV in general.  I dislike SyFy's programming in specific.  That being said, I did enjoy the one season of Who Wants To Be A Superhero? that I watched at my then-girlfriend's insistence.  It was for that reason and (full disclosure) the fact that I know two people involved in the production that I decided to give this show the chance I wouldn't give the loathsome Heroes of Cosplay.

My hopes weren't high after the first segment when they revealed the cast - seven real geeks who won the honor of interning with Stan Lee for the summer.  How could my hopes be high when one of the cast is introduced as a literal basement dweller who lives with his mom?!  Stereotyping, much?  I also wasn't thrilled when I noticed that all of the male cast looked like they'd been sent over from central casting to be background characters in Revenge Of The Nerds V: The Next Generation whereas all three of the core female cast were photogenic.  I was truly afraid this was going to be another geek minstrel show like The Big Bang Theory.

And then something amazing happened towards the end of the second segment.  After the usual Reality TV nonsense where our heroes are sent out to accomplish some task (i.e. collecting signatures at an event to make Geek Pride Day a national holiday) and the usual forced drama as they attempt said task (i.e. they forgot the official petition paperwork), the cast are getting dinner at the restaurant where this Geek Pride event is being held.  A man then announces the arrival of "The Superhero Angels" and out strut three women in costumes that were definitely NOT approved by The Comics Code Authority.

All the fangirls are annoyed by this and quite rightly so.  What follows is a surprising talk where the group discuss the difference between women who cosplay because of their love of the character and dancers who put on a skimpy parody of a Wonder Woman costume to entertain the crowd at a bar and grill.  I've seen this sort of discussion on-line a thousand times and given this explanation a few times personally.  Yet this is the first time I've seen it explained on a television show!

The best moments of Fangasm are like that.  Moments that focus upon the cast as people and the sensations that unite us all, be you Trekkie, Whovian, Browncoat or Whatever.  Scenes such as a contrived contest at a local comic book store are a necessary evil to reach the excellent moments such as where Sal persuades the only other contender in the contest to give up so that his new pal Paul can win dinner with George Takei instead of her.

Personally, I'd much rather the show just filmed the conversations between the cast instead of focusing upon such contrivances.  Alas, reality TV would not be reality TV without such contrivances and I suspect the general public's tolerance for such talk is limited.  Thankfully, the reality TV show aspects did not prove so annoying to me that I couldn't suffer through them to get to the good parts that are just fans being fans.  Nor do I think the cast embarrassed themselves or fandom at large with their antics, unlike some TV shows I could mention.

Bottom Line: If you, like me, have a low tolerance for reality series, believe me when I say that Fangasm is worth it for the good parts.  It does more to promote the realities of Geek Culture than it does to make fun of it and there's some genuinely emotional moments to boot.