WARNING: This column contains information that may possibly spoil the upcoming Man of Steel movie. Read no further if you wish to remain unspoiled! 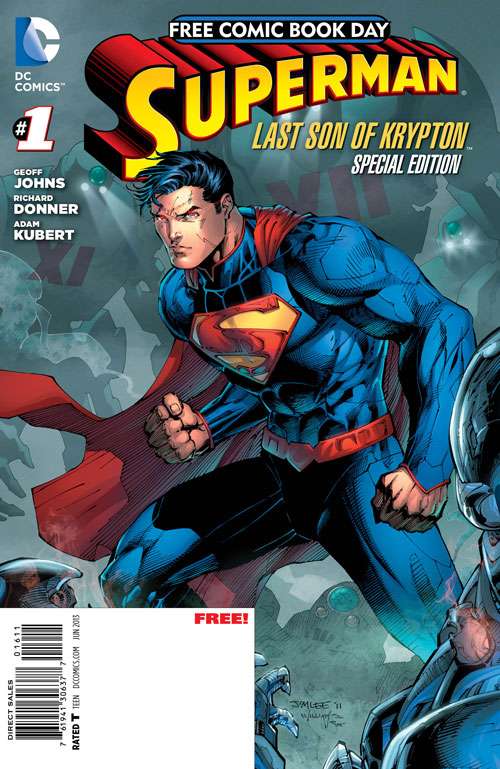 Superman: Last Son of Krypton - Special Edition surprised me more than any other title I picked up on Free Comic Book Day but not for the reasons you might expect.  Despite all appearances on the cover, with a Superman in the New 52 variant of his costume, this is not a current Superman story.  It's firmly set in the post-Infinte Crisis DCU.

It's a good issue, don't get me wrong.  The story by Geoff Johns and Superman: The Movie director Richard Donner is engaging and the artwork by Andy Kubert is divine.  I just can't think of any reason why DC Comics would mass produce a six-year-old comic about Superman being confronted with a young boy who is seemingly also a refugee from Krypton.  At least, I couldn't until I read an article this morning by Rob Bricken at i09.com.

In this article, Bricken discussed a rumor that the planet Krypton might not be destroyed in the upcoming Man of Steel movie and that the reason baby Kal-El is blasted into space was because his method of birth (i.e. produced through actual, physical sex rather than through artificial means) was offensive to The Powers That Be on Krypton.  This puts a whole new spin on why General Zod (confirmed to be the main bad guy) is sending threatening messages to Earth demanding the return of one of his citizens and why Superman would feel any conflict about returning to his people if he is - as is seen in the trailer - largely viewed with distrust on Earth.

Now, ignoring all the wailing and gnashing of teeth about how this goes against the core idea of everything that Superman is, how much of his personal character is changed if he is not the last survivor of a doomed world and how this has made Man of Steel into more of a live-action Dragonball Z movie than the Dragonball Z live-action movie was... I think the idea has some merit.  Yes, the first two words of Grant Morrison's eight-word retelling of Superman's origin are "Doomed Planet" but that's the problem.  The biggest complaint we always hear about superhero movies - especially reboots - is that too much time is wasted telling the origins of a hero we already are familiar with.  I think it would actually be brilliant if Christopher Nolan and Zack Snyder tried to do a slightly different take on the Superman origin story - an Elseworlds, if you will - if only to break the mold.

However, I doubt this is the case taking Bricken's information into account with DC Comics' curious decision to republish the first part of the Last Son storyline.  For this storyline was the first to introduce the idea of more survivors of Krypton's destruction living inside The Phantom Zone.  The end result of this was Superman's releasing a small army's worth of angry, xenophobic Kryptonians into a solar system where they all had the powers of gods, the establishment of a New Krypton planet in said solar system and an eventual all-out war with Earth, with the charge against the Earthlings being led by General Zod.

Why does that sound a bit familiar?

Who is to say that Zod and the other refugees survived Krypton's destruction on their own and create a new planet, which they dub Krypton in honor of their fallen homeworld?  It seems as likely as the suggestions Bricken implies in his article.  And it would explain why, out of all the stories they could have published, why DC Comics chose to reprint this issue for Free Comic Book Day.