Normally I don't show the covers of the books I review.  I'm more concerned about the contents of the book - the story and the interior art.  This is doubly true of books like Red Sonja, where sensationalist alternate covers tend to be the rule, regardless of the craft and quality of the book's contents. This time I decided to make an exception so that I may point out an irony that amused me.  Consider the above cover, in which we get a full moon as Sonja twirls around, having sensed some hidden danger.  Consider then the page below and the lengths through which artist Jose Malaga goes to keep Sonja's shapely posterior hidden as she is bathing.

I'm not decrying the lack of full nudity in this book.  I just find it funny that we get to see virtually all of Sonja's rear flank on the cover only for there to be less revealing artwork in the inside of the book  However, I must say that the artwork overall is good, despite the blatant fan-service.  And unlike the artist in the monthly book of late, Jose Malaga has a plausible grasp of female anatomy and the later scenes - in which Sonja is clad in a leopardskin bikini - are not bad at all. And how is it that Sonja came to trade her familiar scale-mail for Shanna The She Devil's spare costume?  It's all thanks to the world's stupidest druid, who was cursed with lycanthropy after he made the mistake of killing all the favored animals of his patron deity as part of a rite to summon said deity and demand eternal life.  By sheer dumb luck, he happened upon Sonja and decided to make her up as an offering - either as a bride or as dinner - to his patron.  Naturally, Sonja isn't happy about either prospect and is far wiser than the druid in regards to the wisdom of asking Hyboria's notoriously vindictive gods for favors.

Writer Scott Beatty - best known for his work on various Batman titles as well as authoring several superhero encyclopedias - does a good job portraying Sonja as a competent heroine, despite the suggestive artwork and the potentially exploitative situation.  There is not a moment in this story where Sonja seems fearful or cowed - not even when she is starring down an angry nature god.  As one might expect given Beatty's obvious talent for research, the story fits well within the Robert E. Howard canon with the nature god in question - Jhebbal Sag - having been taken from Howard's story Beyond The Black River. 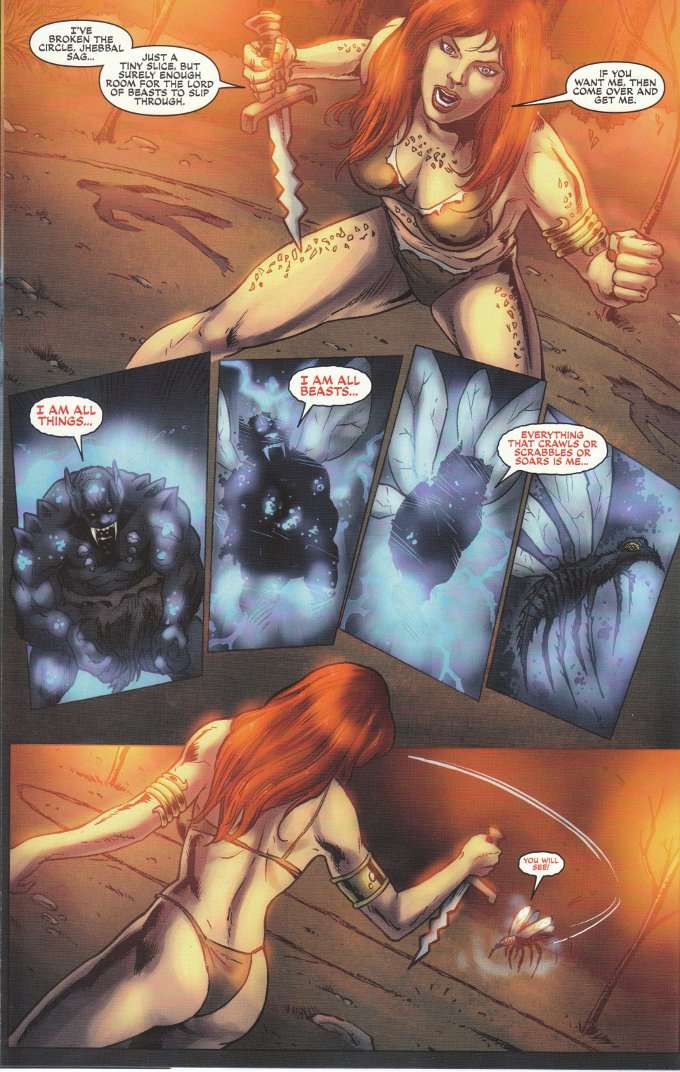 Can I recommend this issue?  Not in good conscience.  It isn't bad but with a $4.99 price, I think you deserve a bit more than one story that is just "not bad".  The artwork is good but the cheesy opening kills a lot of the mood, as I immediately found myself flashing-back to numerous Gen 13 comics where it was Fairchild who was being caught off-guard and waking up in a ridiculous costume.  And while Beatty does a good job of portraying Sonja as competent and in-control the whole time, there is no real sense of menace or threat.  The ending is also just a tad too pat.
Posted by Starman at 5:19 PM