Kaze No Stigma: The Complete Series - A No Flying, No Tights Review 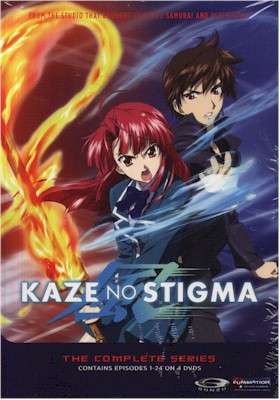 For hundreds of years, the Kannagi Clan served humanity as protectors and guardians. Armed with the mystical art of Enjutsu – a.k.a. Blaze Technique or Fire Magic – the Kannagi Clan stood fast against all manner of rogue magicians and demons. Even in modern times, the Kannagi Clan is renowned for their skills and called in by the Tokyo Police to deal with supernatural threats the authorities cannot handle.

Kazuma Kannagi was not like the rest of his clan, having no affinity at all for the magic his clan was expected to master at an early age. The final humiliation came when he was defeated by his distant cousin, Ayano, in a ceremonial duel to determine who would be the head of the clan for the next generation. Kazuma’s father, the mightiest warrior of the Kannagi Clan, angered that his eldest son could be so easily defeated by a young girl, renounced him and cast him out into the wide world.

Four years later, Kazuma returns to Tokyo, having mastered the art of Fujutsu, a.k.a. Wind Technique or Air Magic. What is more, Kazuma bears the Stigma of the Wind – eyes as blue as the azure sky. This is the symbol of a “Contractor,”  a Fujutsu master entrusted by the Spirit King of the Wind with the full power of his domain.

Ayano is now a senior in high school and a master of Enjutsu, wielding the family’s sacred sword Enraiha in battle. A textbook example of a fiery redhead, Ayano is nevertheless a powerful mage and a dangerous warrior when she can control her temper. At first she cares little about the return of the cool-hearted cousin. Then other members of the Kannagi Clan begin to turn up dead, killed by wind magic. And that is all it takes to set Ayano on the warpath, ready to take her cousin’s life.

Now, in order to prove his innocence, Kazuma must make peace with the hot-headed heir-apparent of the family that disowned him. For there are other threats to the Kannagi Clan besides a mysterious wind-wielding assassin, and it will take a combination of the cleansing power of Fire and the subtle manipulation of Wind if the world is to be saved.

Kaze No Stigma has one of the richest mythologies of any anime series I’ve ever seen. The idea of families with supernatural powers fighting great evils and elemental magic is nothing new, but the execution is carried off very well. Indeed, the anime is so well-paced that one hardly notices that all of the characters are strictly stock anime stereotypes with Kazuma being your typical tight-lipped bishonen and Ayano being a textbook example of a tsundere.

The only real negative this series has is a gratuitous amount of fan-service. Ayano is usually dressed in a school uniform with the standard short skirt and it is a rare episode that doesn’t feature at least one panty shot as she is fighting. Several female characters have their clothing ripped to reveal their underwear and one of the villains in the later part of the series is a perverted classmate of Ayano’s who plants secret cameras in the girls locker room at school.

This is par for the course with romantic comedy anime, of course, but some of the nudity that takes place during scenes involving ritual sacrifice is intense enough to make me question the TV14 rating for this series as a whole. This is despite said nudity lacking definition and being limited to some far shots, naked backsides, and silhouettes. That being said, I would still recommend this series for older teens and adults looking for a good action-oriented urban fantasy series with a Moonlighting-style romance.