Titled "No Way Out", Arrow #31 goes to the streets of Starling City for its' story.  Our focus this week is on Tony - an out-of-work family man, who has taken a job as muscle for a local loan shark   The money is good but not quite good enough to make ends meet and Tony's conscience starts bothering him even before his boss promises him the money to settle his bills in exchange for his work on one big collection.. 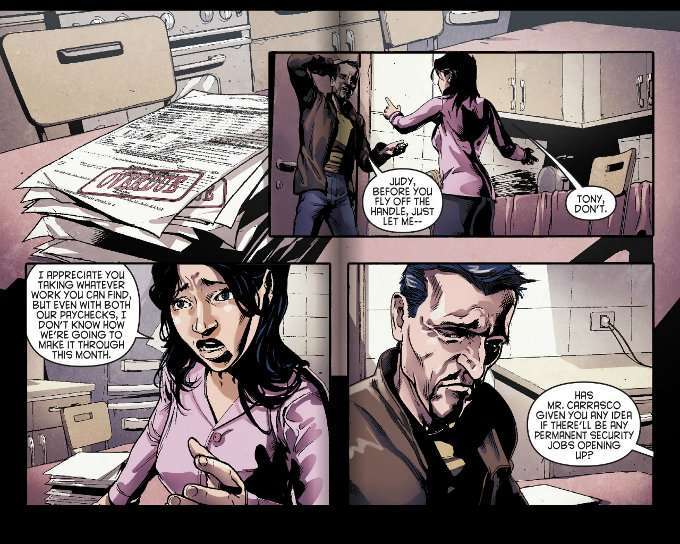 This isn't the first time Emilio Aldrich has told a story which was more about The Hood's influence on Starling City than on Ollie's activities as a vigilante and that's a perfectly legitimate way to tell a story about a character.  The problem is that The Starling City Vigilante doesn't loom over the story as strongly as he should.  Oliver doesn't really affect the emotional action of the story at all.  Heck, he doesn't even show up until the end of the issue once Tony has already made his choice and is only mentioned once in the story before that point! The artwork by Omar Francia is appropriately atmospheric.  Drenched in inks, Francia's work here is reminiscent of Tony Harris though far more stylized.  I think I can also detect a slight hint of Sean Phillips influencing the style here.  It fits the story perfectly, since Aldrich seems to be channeling Ed Brubaker.

Is this a riveting crime comic in the spirit of Criminal?  Yes.  Is it an Arrow story?  Not really.  At least, it doesn't feel like one.  You can safely skip this comic without feeling like you're missing anything as an Arrow fan but lovers of crime comics will want to check this out.
Posted by Starman at 8:44 AM