It's a rare thing in these days of writing-for-the-trade for a comic book to feature a title page recapping the action of the story so far.  It's even rarer for a writer to summarize the earlier chapters as a part of the story in a way that flows naturally.  And rarest of all is the writer who does this in the second issue of a comic, for the benefit of new readers who might not have been able to find a copy of the first issue.  Constantine #2 is one of this rarest breed of book, with a second page that neatly summarizes the series to date. 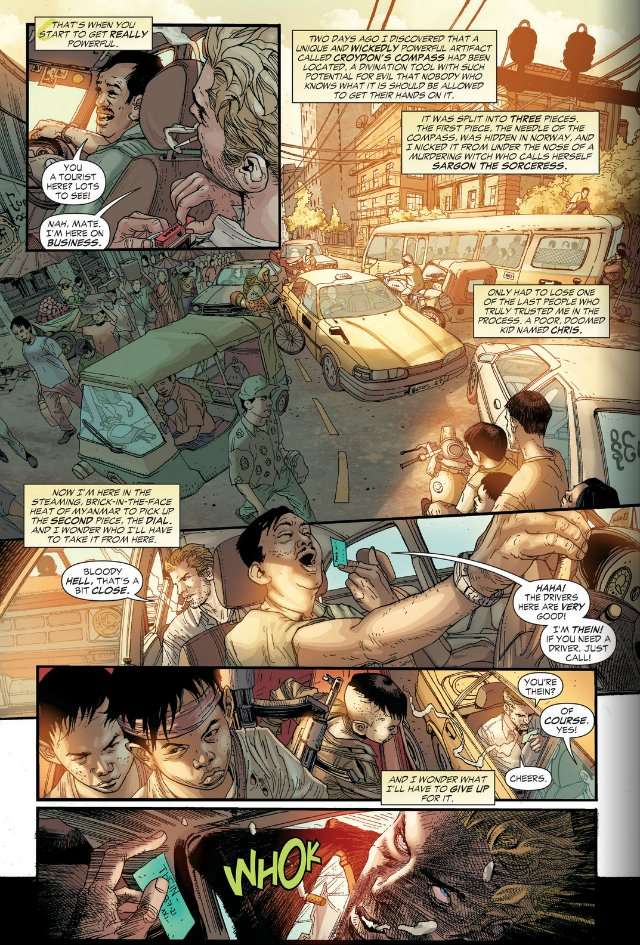 Such is the level of fine detail that Jeff Lemire brings to every series he writes.  Were that the end of it, it would be enough to earn my admiration.  But Lemire is a creative author as well, presenting ideas so novel I find myself amazed that nobody has considered exploring them in a story before.  Such is the case for the centerpiece of this issue - Why hasn't The Spectre sought to bring John Constantine to justice for his many crimes?  Lord knows John deserves it - literally.  And John's earned the attention of equally powerful supernatural beings before.  So why is it only now that God's Wrath has fallen upon The Laughing Magician?  Because Lemire is a chess-master of prose and only one such as he could play the pieces in such a manner.

Lemire's script is matched in detail and quality by the art of Renato Guedes.  I have a hard time picking favorites among artists but I'd easily rank Guedes as one of the top 5 working at DC Comics today.  Another few issues like this one and he might make my personal Top 5.

Bottom Line - if you haven't been reading Constantine, there's still time to catch-up.
Posted by Starman at 9:01 PM