Unsurprisingly, the worst parts of Supergirl #16 are those that tie directly into the H'El On Earth crossover storyline.  It's just assumed we've been reading the rest of the Superman books, so naturally we'll know who these red-skinned aliens are, why they're chasing after H'El and who their mysterious Master is.  Normally that might be a safe assumption with a crossover event, but given that the individual issues of Supergirl thus far have stood on their own terms it's rather foolish for them to shift focus now.

Thankfully, the better part of the issue is truer to form and writer Mike Johnson has fun with the concept of Supergirl tearing around the Fortress of Solitude in a super-speed fight with The Flash.  Indeed, this issue offers an amazing moment for fans of Kara Zor-El.  Particularly if you're a fan like me who loves Supergirl and hates Barry Allen.  I can't STAND Barry Allen, for a variety of reasons that are a column unto themselves.  Suffice it to say, this issue proves that the Fastest Man Alive has nothing on the Fastest Girl Alive. 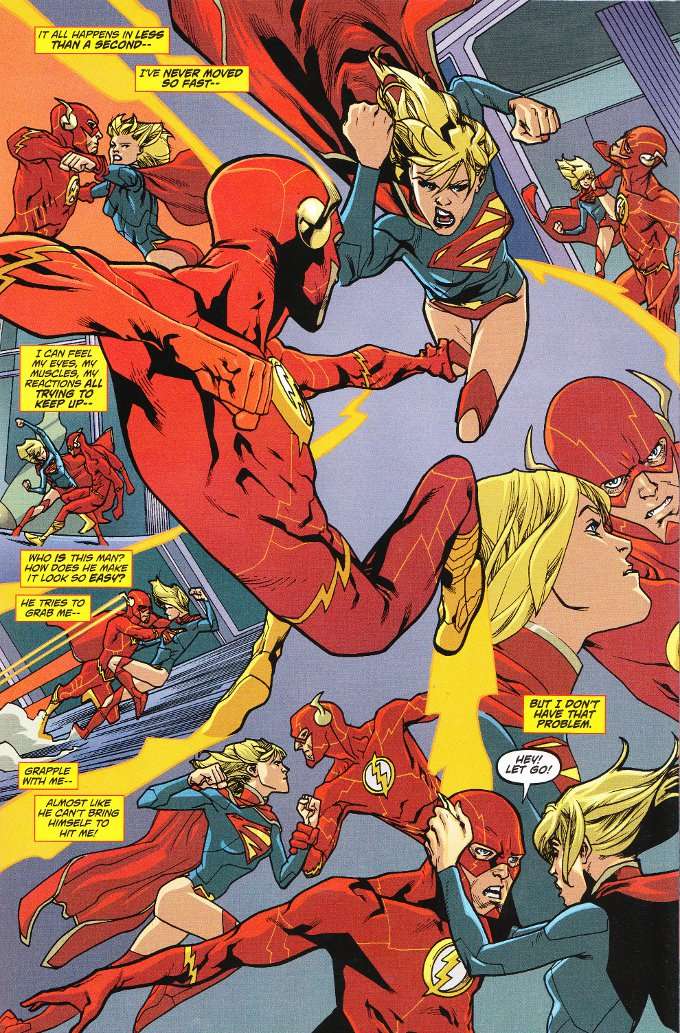 Mahmud Asrar's artwork perfectly captures the high-action set-up.  We don't get any backgrounds during the up-close fight scenes but stylistically that works well, given the speed at which the battle takes place.  During the rest of the scenes, Asrar perfectly captures the alien majesty of the Fortress of Solitude.  I particularly like his designs for Krypto the Super Dog and the alien beasties in Superman's zoo.

Final Analysis?  H'El on Earth?  Boring and Stupid.  Supergirl #16?  Awesome despite it, even if you - unlike me - aren't amused by Barry Allen getting his butt kicked by a teenage girl.
Posted by Starman at 7:58 AM