It's a good thing Eric Trautmann has followed the Stan Lee rule about treating every comic you write as if it were going to be someone's first.  After a one-month delay in this issue's release, I must confess I'd forgotten where the last issue of Red Sonja left off.  Given that, the opening page which recounts the recent events - and indeed the whole of Trautmann's run - is quite welcome.

The plot is fast-paced and thrilling, focusing upon Sonja and her band of companions trying to pass through hostile lands unnoticed.   Naturally, it is not so simple and numerous enemies - both old and new - are hunting Sonja and her companions for one reason or another.  There's also some good character moments regarding Sonja and her recently rescued companion, the Pict Wurkest.  Howard purists may balk at the idea of a Pict who left his home to go adventuring but such things - while rare - are perhaps not any rarer than a Cimmerian leaving his homeland to see the world. 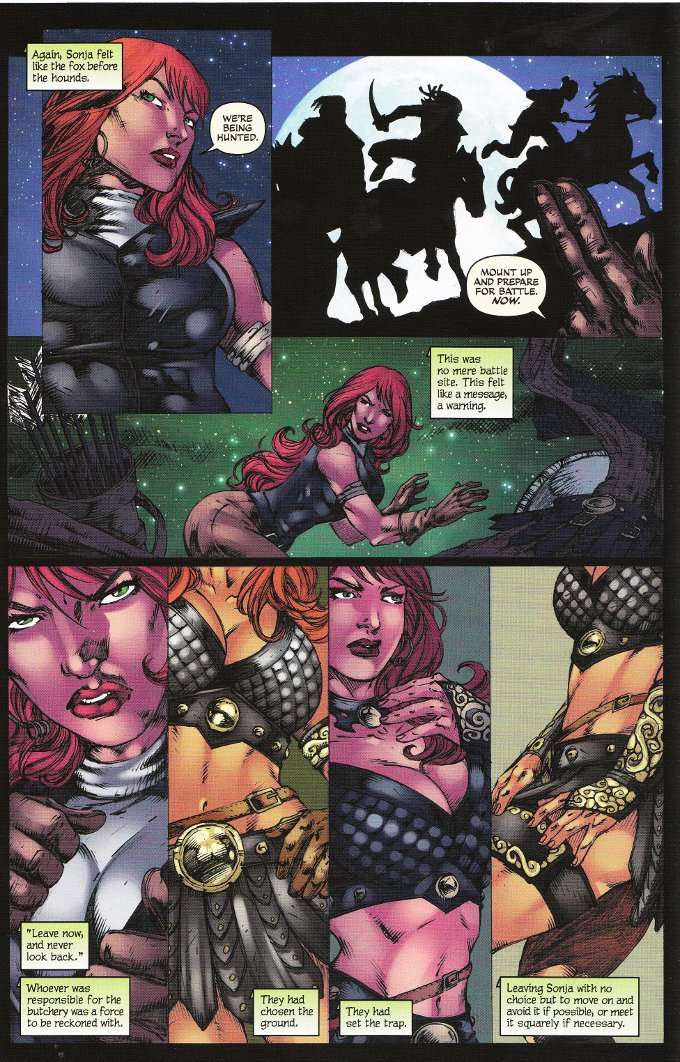 Marcio Abreu's artwork continues to be less offensive than it once was, though that doesn't mean it's actually good.  Odd bends of the spine and the sudden disappearance of Sonja's neck are frequent problems.  At least the odd up-skirt shots are a thing of the past but this may be due to Sonja's current costume involving actual pants.  At least, until the fighting breaks out, when Sonja takes the time to change into a black leather number that Xena would consider immodest.

Can I recommend Red Sonja #73?  Only with some caveats regarding the quality of the artwork or lack thereof.  The script is good stuff but your ability to enjoy this issue may come down to how well you can tolerate mediocre artwork for the sake of a good sword and sorcery story.  Make of that what you will.
Posted by Starman at 12:03 AM