Injustice: Gods Among Us #6 - A Review

The Ancient Greeks believed that by killing a man's wife and children you killed the man, for it was through the family that a man's immortality was assured.  While this idea is not spoken in Injustice #6, it still lies at the heart of this book.  For all intents and purposes, Clark Kent died along with Lois Lane and their unborn child.  All that remains now is the Super, without the Man. 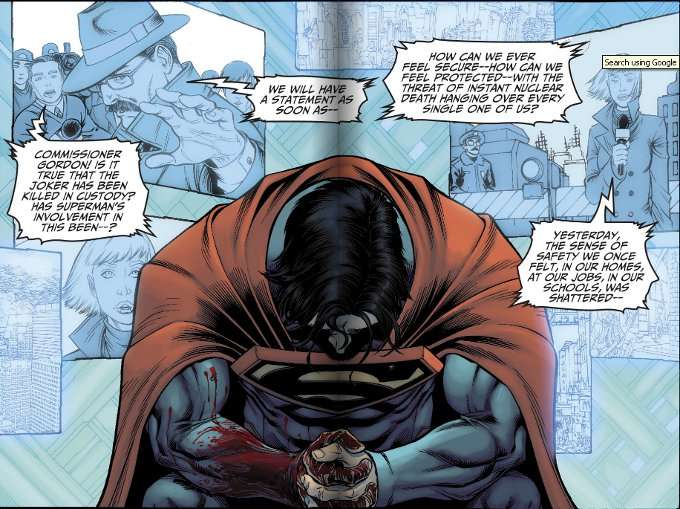 Artist Mike S. Miller perfectly captures the anguish of Superman in this one panel.  Head bowed, the blood of The Joker still on his hands, all the while surrounded by the reminders of what he's done and his failures - both in protecting his city and living up to his code.  It's a powerful image, matched by a powerful script, which gives us a speech that echos Superman's addressing the United Nations in other classic Superman stories without seeming derivative. 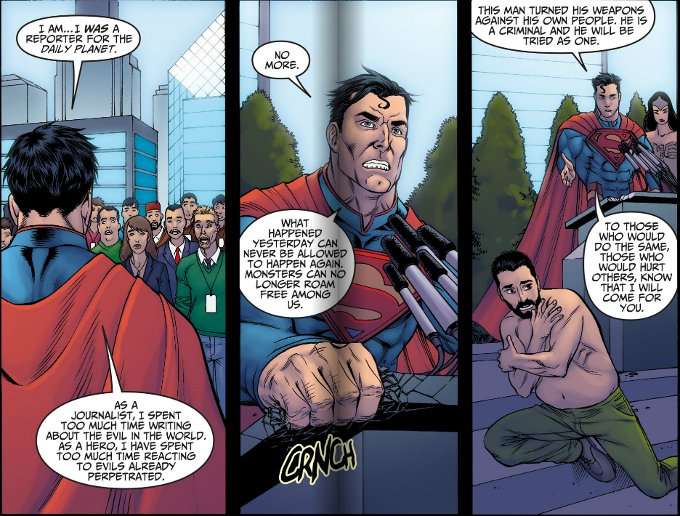 Far too often, deconstructions of Superman are accomplished through proxy characters in other series like Astro City or Irredeemable.  Here, Tom Taylor lays bare the Man of Steel as he explores what happens when the heart of gold is overridden by the iron fist.  You can't help but sympathize with Superman and see the reasoning behind his actions in this issue, even as you consider the horror that his more liberty-minded colleagues like Green Arrow would feel in seeing a Superman who has decided to provide Security at the cost of Freedom.

Not bad for a tie-in comic to a video game about superheroes punching each other, eh?  It's deep stuff and it is brilliant.  Definitely worth a 99 cent download.
Posted by Starman at 8:10 AM