Detour is the name of our story this week.  The plot focuses upon Oliver Queen and John Diggle being car-jacked by an attractive young lady, who posed as a damsel in distress with a broken car. It turns out that young damsel IS in distressed and that her carjacking was born of desperation as she tries to escape from her car-thief boyfriend. 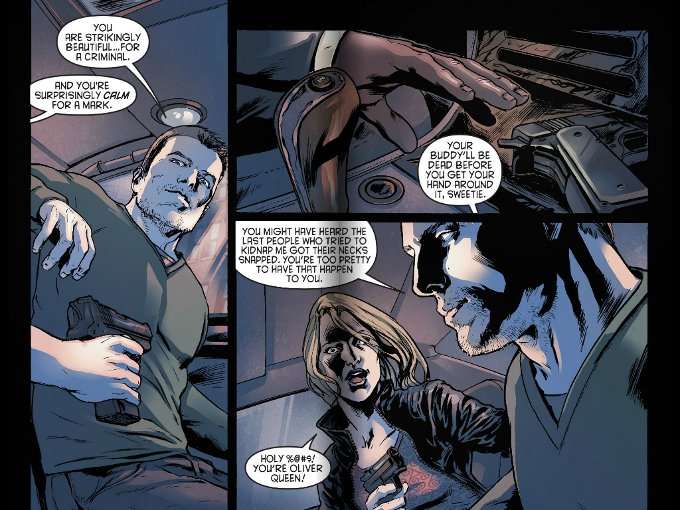 Reason #237 Ollie Is Cool - Flirts With Women Who Could Kill Him.
The script by Mary Iacono is fast-paced and thrilling, but not quite fast-paced enough to escape some rather glaring plot holes.  I can forgive some rather questionable gaps in logic, such as the young lady being afraid of her boyfriend and his gang despite the fact that she owns a gun.  Many abuse victims become illogical when faced with their abusers and she may have been in a rush when she came up with the "car-jack somebody to escape" plan.  Yet I can't help but wonder exactly why the car thieves leave Ollie and Diggle behind after stealing their car and taking the girl only THEN to say "go back and kill those guys who can identify us."  I also have no explanation for how Ollie and Diggle were able to track down their car later.  Maybe Diggle left his phone in the car and Ollie was able to track it using a "lost phone" app? 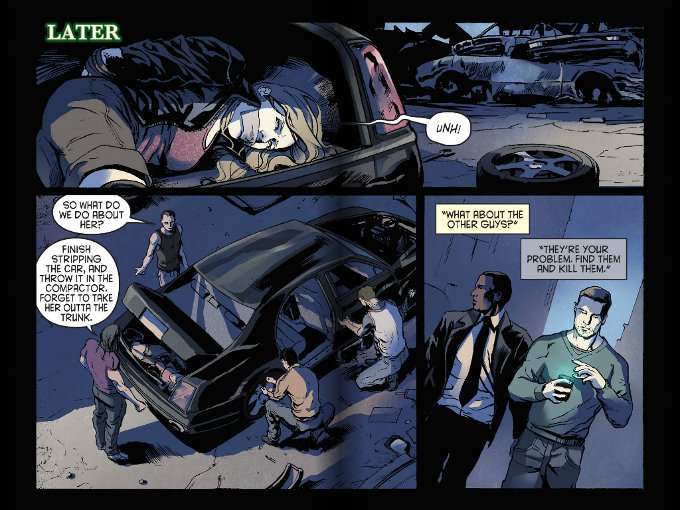 While I may quibble with the plotting, I have nothing bad to say about the artwork.  The car chase that takes up the larger part of the comic is very well illustrated.  Artist Xermanico also perfectly captures the likenesses of our regular cast members and has a grasp of shadow-usage that rivals Mike Grell's.
Posted by Starman at 9:13 AM