Arrow #18 gives us another flashback look at the life of The Lance family.  Set sometime just after Sara Lance's disappearance and presumed death, we find that Laurel is about to undergo a series of mock trials - the final test before being awarded her law degree.  This would be stressful enough without the revelation of Sara's death, Laurel's discovery that her boyfriend (also presumed dead) had been cheating on her with her sister and her mother walking out on both her and her father.

Needless to say Laurel needs her father's support more than ever, but Quentin Lance is equally troubled.  Not only by the death of his daughter and the collapse of his marriage but by a sudden break in a cold case involving a dormant serial killer he was never able to catch.  Faced with a chance to finally nail "the one who got away", will Quentin ultimately keep his promise to be there for his daughter at one of the toughest times in her life? 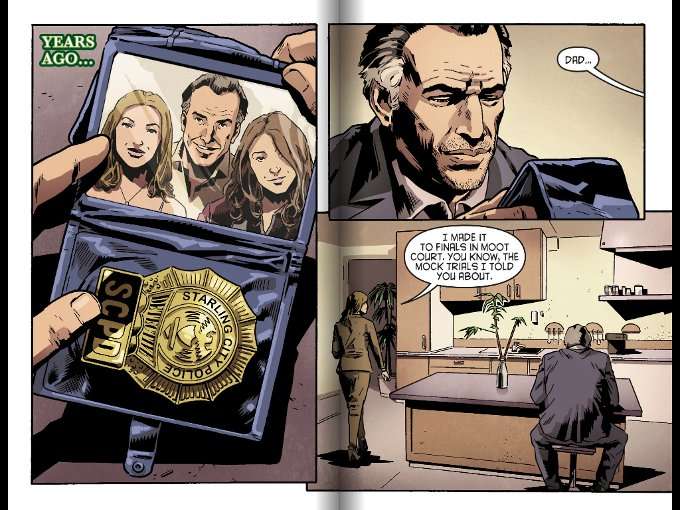 The script by Mary Iacono and Tiffany Williams is enjoyable despite indulging in every single cliche of crime fiction.  The serial killer is ultimately tracked down by analyzing the mud he left at the scene of the crime and the police even call him "The Night-Stalker", for crying out loud!  Still, the drama as Detective Lance goes into Javert mode is thrilling and this issue is a great analysis of his character.  There's also quite a bit sly humor regarding Quentin, on the show at-least, apparently being one of the only two detectives in Starling City as Quentin's partner says "You don't have to be the one catching all the bad guys." 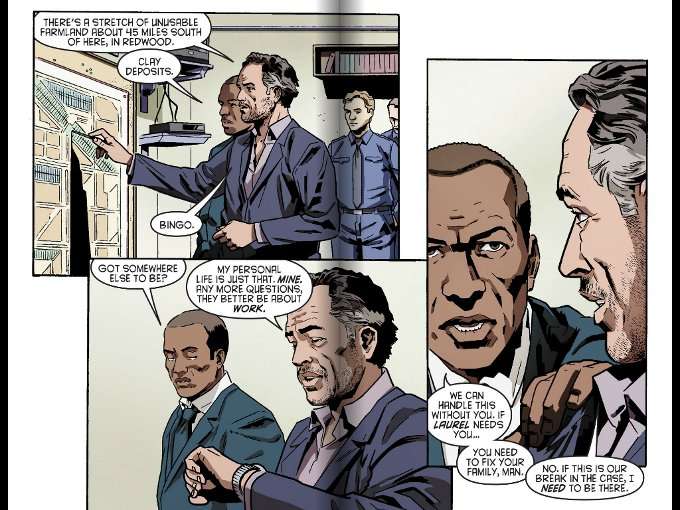 Sergio Sandoval is proving quite the phenomena.  Out of all the artists to work on Arrow, he easily does the best job of caricaturing the cast.  Quentin and Laurel look just like Paul Blackthrone and Katie Cassidy, which is the best you can hope for in a comic based on a live-action property.  The action scenes are also laid out well.  Pol Gas does a perfect job on the inks, outlining and emphasizing the shadows without drowning the page in ink.

Enjoyable despite it's flaws, Arrow #18 is easily worth the one-dollar download.  It's a must-read for all fans of Quentin Lance's character as well as fans of true-crime thrillers and Arrowheads.
Posted by Starman at 8:56 AM