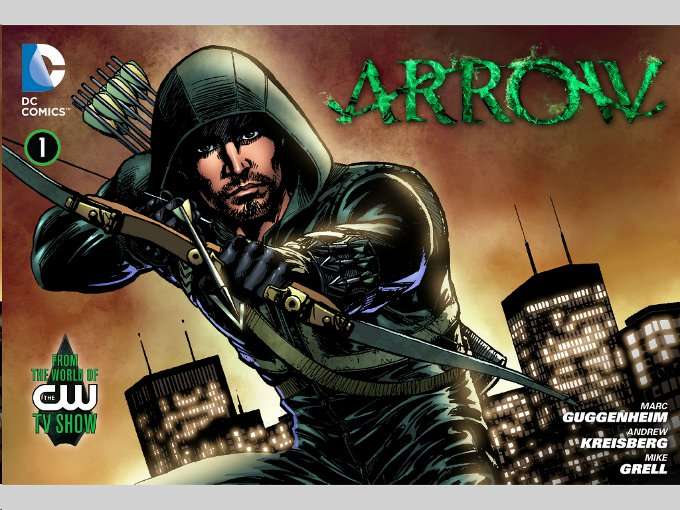 Arrow #1 will seem pleasantly familiar to most Arrow-Heads.  The setting may be new, Star City having been changed to Starling City.  The supporting cast may be different, with the love of Ollie's life now being named Laurel rather than Dinah and Ollie - previously an only child and an orphan in all his previous incarnations - now having a living mother and a younger sister.  But the heart and soul of the Emerald Archer - everything that makes Oliver Queen unique as a character and a hero - all of that is intact and on display here. 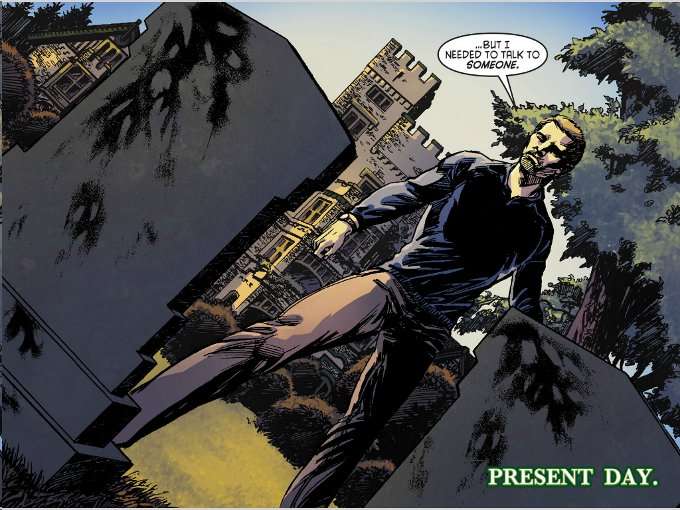 The story of this issue offers few surprises, covering the same information fans have likely learned from the previews of the Arrow TV show and discussions with the show's actors and creators.  Newly returned to civilization after five years marooned on a deserted island, Oliver Queen struggles to put his life in order.  On the one hand, he has to fit in with the privileged high-society crowd he used to be a part of, for the sake of his loved ones.  On the other hand, he wants to honor his father's dying wish to make up for his mistakes and confront the evils that threaten their home town..

We don't get any reasons as to precisely why Ollie is having trouble fitting in again, apart from some vague talk about him being selfish and judgmental towards his family.  Thankfully, what the script by show creators Marc Guggenheim and Andrew Kreisberg lacks in detail it more than makes up for in pathos.  The scenes of Ollie talking to his father's grave and soliloquizing about his conflict prove quite effective, marking this version of Ollie as a cousin to Hamlet. Presumably we'll get more details about precisely why Ollie is clashing with his family and friends in the first episode of Arrow. 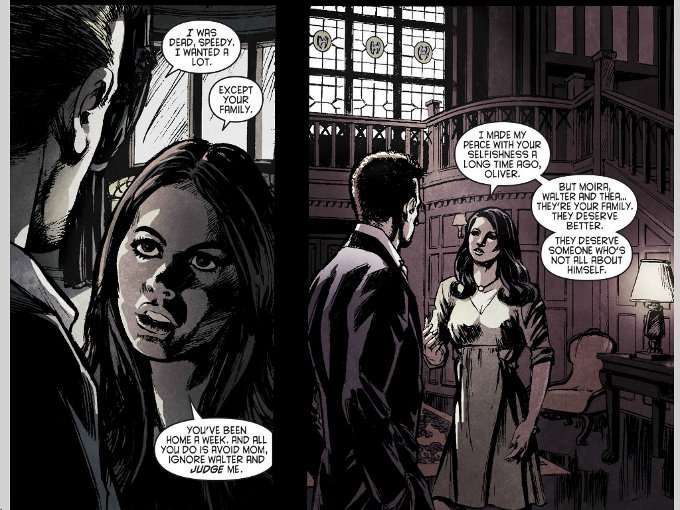 Legendary Green Arrow author and artist Mike Grell handles the art duties for the entire issue and proves worthy of the title "legendary".  Though this issue gives Grell little chance to showcase his famous skills for illustrating action scenes, he does render everything in an appropriate manner.  Heavy shadows and angles where Ollie's face is obscured as he talks to the people he must hide his secrets from help to subtly emphasize the theme of deception and just how alone Oliver feels.  Colorists David Lopez & Santi Casas of Ikari Studio also help to emphasize the story's theme of isolation, using washed out colors in the scenes where Oliver deals with his friends and family while a brighter, more colorful palette is used in the outdoor scenes where Oliver is alone and relatively at peace.

Bottom Line; this is the Green Arrow book DC Comics should have given us a year ago.  The artwork is all-around amazing and establishes its' mood perfectly.  The story establishes our protagonist's central conflict effectively though it does skimp on the details of his current circumstances.  Despite this, this issue does a great job of introducing Ollie as a character to new readers and establishes the base concept of the world effectively.  Highly recommended to Arrow-Heads, old and new.