Sword Of Sorcery #0 - A Review

Nearly 10 years ago, I suggested that DC Comics should look into reviving the much beloved Amethyst, Princess of Gemworld series.

It took them a while but someone is finally listening to me. ;) 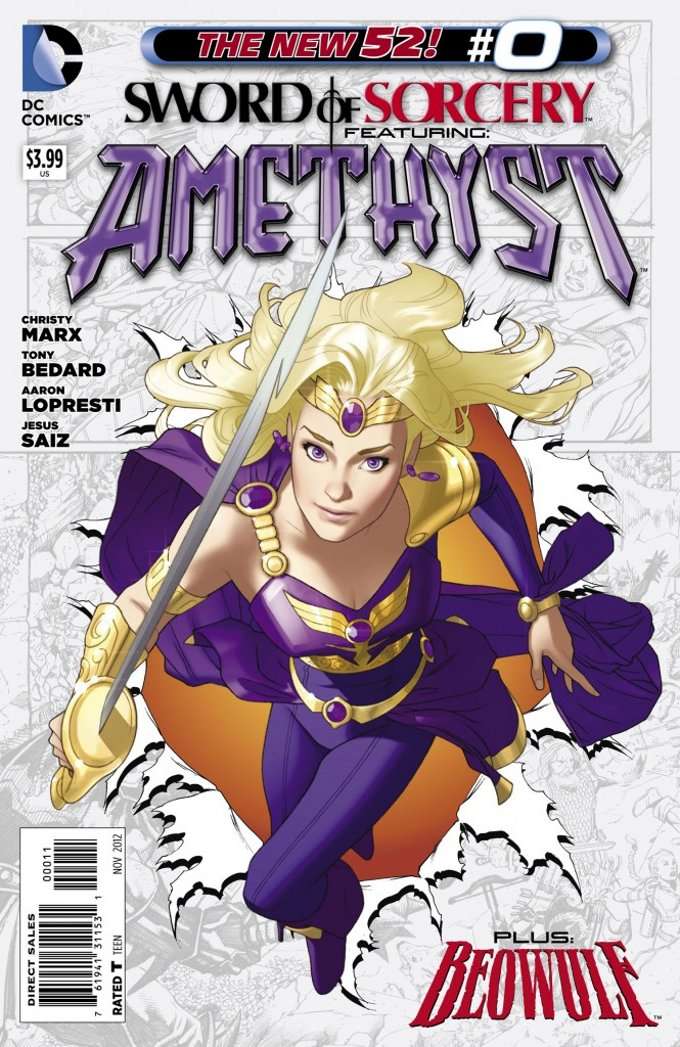 All kidding aside, I could hardly have asked for a better comic than this had it been custom-made to my specifications. I'm a life-long fan of the sword-and-sorcery genre and my favorite original series out of all the New 52 books has been Demon Knights. But even ignoring my own bias, this is a great book that has a lot to offer a variety of readers. 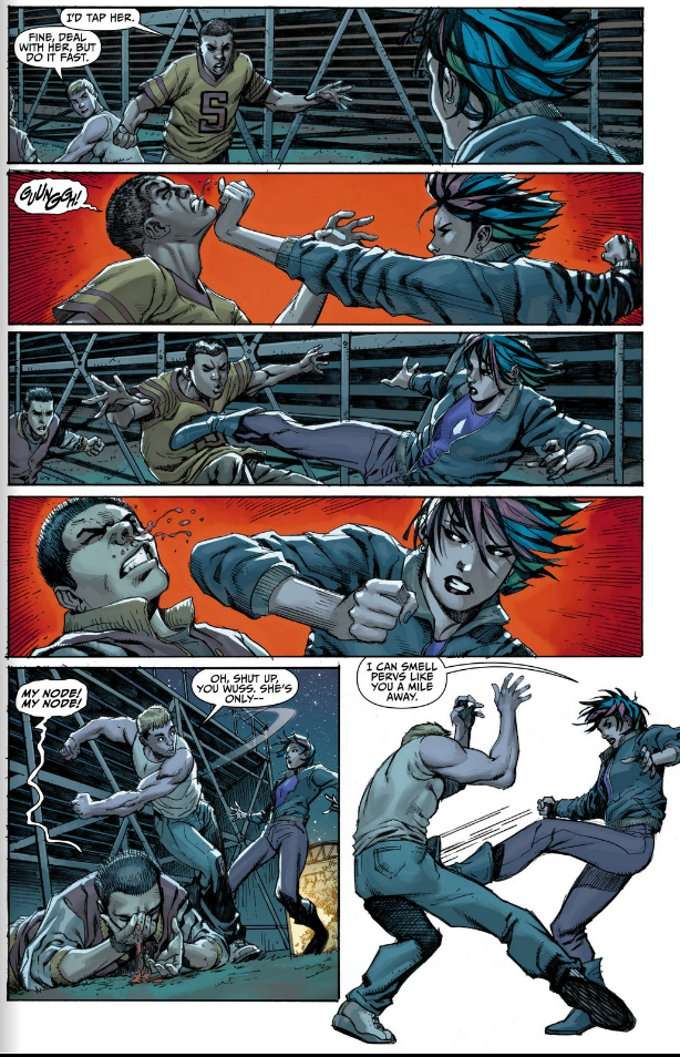 The greater portion of this issue is devoted toward the aforementioned revival of Amethyst, Princess of Gemworld. We see little of the titular Gemworld but we do get a strong introduction to our heroine - Amy Winston a.k.a. Princess Amaya. Hidden away on Earth from her evil aunt, Amy has been raised on the run and trained as a warrior by her mother. This has made it difficult for young Amy to make friends but left her a good sense of who can be trusted and made her more than capable of defending herself from bullies and worse. As the hour of her 17th birthday approaches, Amy and her mother make the journey back to their homeworld - the other-dimensional planet known as Gemworld. The homecoming is not a smooth once, however, and Amy finds herself pressed into battle far sooner than her mother had hoped.

Writer Christy Marx breathes new life into this classic concept and I'm hard pressed to think of another writer who could have done so grand a job. Best known for her work as a writer on a number of cartoons and computer games, Marx is no stranger when it comes to writing strong-willed young women with a connection to a gem. And if you think I'm about to make a comment about this book being "truly outrageous"... well, you've been reading my reviews too long. Punning and referential humor aside, Marx establishes Amy as a sympathetic, no-nonsense heroine fairly quickly while still infusing the book with her trademark humor. 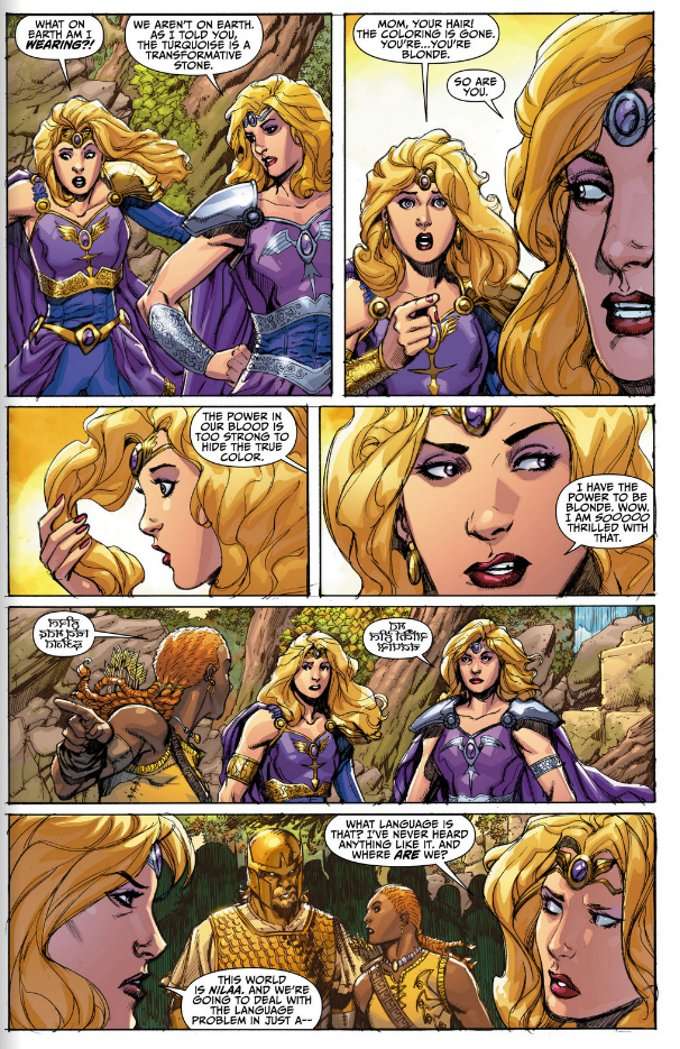 Aaron Lopresti, most recently of Justice League International, does a fine job of depicting both the mundane and the mystical elements of Marx's script. It is unclear at present if this new series will stick to the classic idea of Amy living a double-life, half on Earth and half in Gemworld. If it does stick to the old ways, it is nice to know it will be in the hands of an artist who can draw a brawl behind the bleachers as well as a battle with a horde of armored knights. Surprisingly few artists are able to show that kind of diversity but Lopresti proves successful in that regard.

The second story in this issue presents a post-apocalyptic take upon a classic character who - while depicted in the pages of his own DC Comics - existed for quite some time before comic books or even the printing press! I speak of Bewoulf, whom Tony Bedard has reimagined as some sort of super-soldier in cryogenic suspension in a dark future where man has reverted to barbarism and monsters walk the earth! 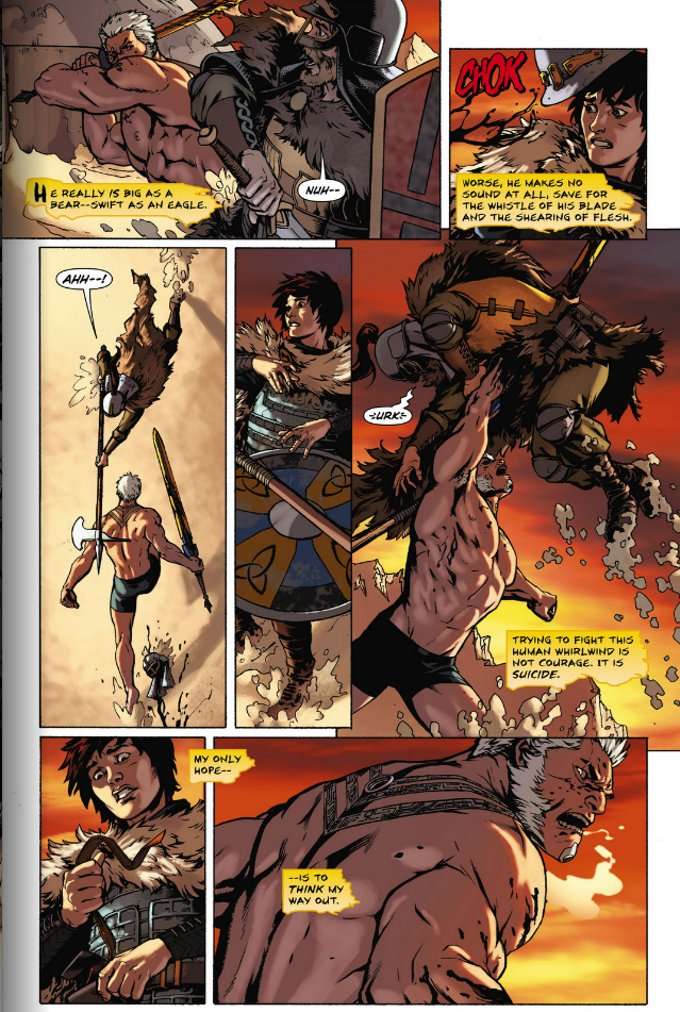 The story here seems to follow the original Beowulf bard's tale - where Beowulf is summoned to the home of a distant king in order to slay the beast called Grendel. There's not a lot of character development to be had here, most of the story being told through the eyes of a young warrior sent to summon forth Beowulf from the home he is pledged to defend - i.e. an abandoned military base. Bedard's script is less dependent on character than it is concept but the idea of Beowulf as a superhuman soldier who only leaves his post after being told the King who summons him is also a general is a nice nod to the original myths, where Beowulf only answers the summons because of the king's reputation as a warrior. The artwork by Jesus Saiz, most recently of Resurrection Man and Birds of Prey, does a fine job of depicting the action with all the blood and gore one would expect in a story based on Beowulf.

This book is a must-read for all comic book readers. Lovers of comics centered around strong female protagonists will find Amethyst to be an entrancing heroine. Fans of the Conan comics will get a kick out of Beowulf. And fantasy fans of all stripes will enjoy the whole package. This book has made my pull list. Make it part of your subscription too.