Slayers Evolution-R (Slayers series/season 5) - A No Flying, No Tights Review. 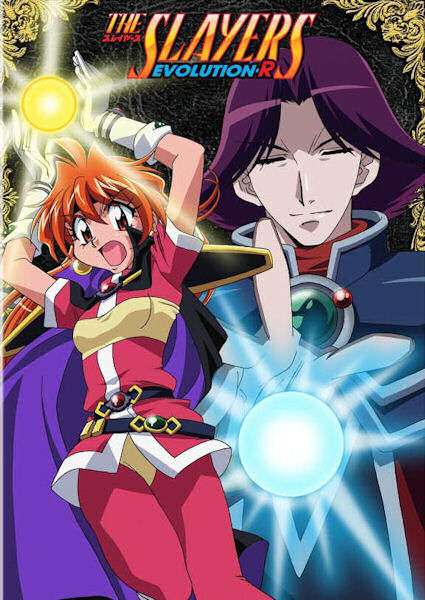 Fresh off a victory over the demon beast Zanafar, the sorceress Lina Inverse and her companions – the bold warrior Gourry, the naïve warrior priestess Amelia, the stone-skinned sorcerer Zelgadis, and the pint-size plush Prince Pokota – have little time to rest on their laurels. As their friends in the kingdom of Seyruun struggle to rebuild their homes, the party begins their search for an artifact of legend – The Hellmaster’s Jar! It is rumored their old enemy The Red Priest Rezo has found a way to defy death itself and that his soul is hidden away, awaiting resurrection, inside the mystic container.

Naturally, the idea of bringing such a dangerous villain back from the dead isn’t something Lina Inverse relishes, even if she had the first clue about how to do it. But Rezo is the only one who can reverse the spells that turned Zelgadis into a stone-skinned demon, trapped Prince Pokota’s soul in the body of a plush animal, and forced the plague-stricken people of Pokota’s homeland into an eternal sleep. And there’s also the hope that the Red Priest, once hailed as a great hero and healer, may be cleansed of the corruption that turned him to villainy.

Ignoring the difficulties in finding the jar in the first place (and the unreliability of their guide, an animated suit of armor named Nama), Lina and her friends aren’t the only ones seeking the Hellmaster’s Jar. Some of Lina’s old enemies, such as the ruthless, shadow-manipulating assassin Zuuma, aren’t quite as dead as they seemed to be. And the manipulative monster priest Xellos is still watching the party, showing up when he’s least wanted to taunt the party with secret knowledge he refuses to share.

The fifth and final chapter in the long-running Slayers anime series, Slayers Evolution-R is surprisingly accessible to new viewers. Despite picking up precisely where Slayers Revolution ended, great care was taken in the scripting of this series to make sure that those who stumbled across this volume would be able to jump into the action without being confused. Cleverly, the characters are able to avoid being overly repetitious, as most of the exposition has to be laid out multiple times for the dim-witted but good-hearted Gourry. This season also features more one-shot episodes which focus more on the humor and the characters than on the over-riding plot. One particularly amusing episode centers upon the justice-minded Amelia getting locked inside of Nama and then setting out to become the personal guardian of an increasingly horrified village.

Technically, the animation style is smooth, but of standard quality for a televised comedy anime. The characters all have distinctive designs, so there is no difficulty in telling anyone apart. The voice acting in both the original Japanese and English the dub is top notch. And as with the earlier Slayers series, this one is rated PG for some mild scariness (gross undead thingies), mild bloodshed (a few lost limbs), and numerous jokes about Lina’s figure (or lack thereof).