I'd say that Justice League #0 is the greatest collection of false advertising and empty promises I've seen all year except for one thing - it's an election year in America.  But in all seriousness, this issue was an all-around disappointment.  There is no Justice League to be found here.  Instead we get the continuing misadventures of Billy Batson - #2 on the list of children I most want to see repeatedly slapped, just behind Joffrey Baratheon of A Game Of Thrones. 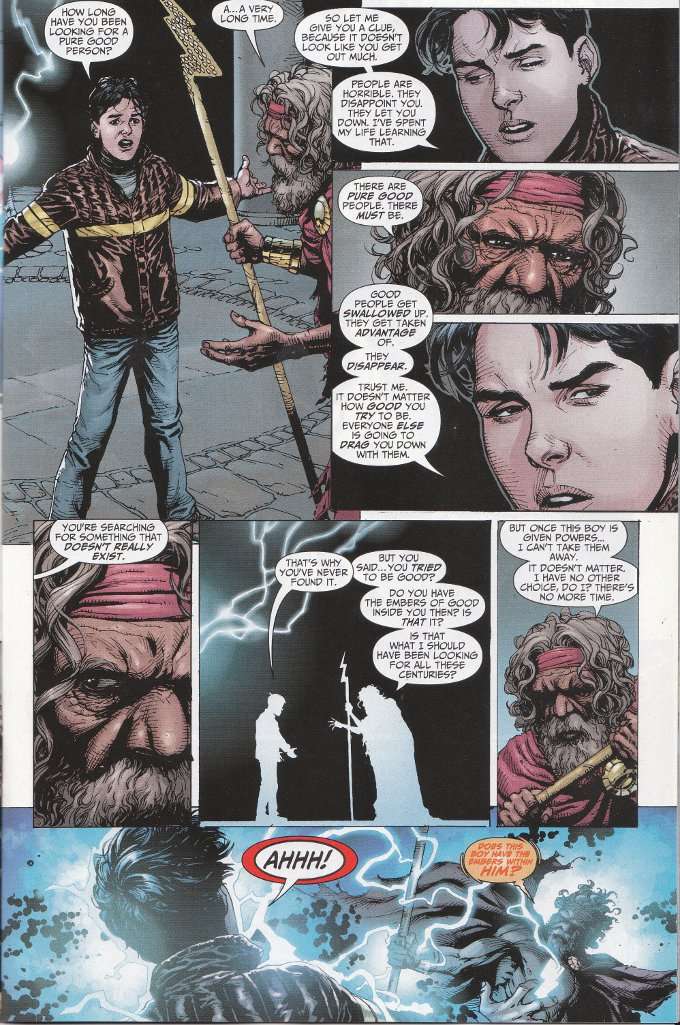 This issue finally brings us the moment we've been waiting for six months - when bratty Billy meets s wizard, who grants him magic powers by saying the word Shazam.  As hinted before, the wizard - like Diogenes - has been seeking a purely good and honest soul for quite some time.  But unlike Diogenes, he thought he actually had a chance of success.  Not surprisingly, being a mouthy jerk and petty crook, Billy fails to past the purity test.  But being a mouthy jerk, Billy points out that nobody is purely honesty and good - a fact that has somehow been missed by one of the wisest men on the planet for several thousand years.  This leads the wizard to test Billy to see if he has the potential to be good, decide "What the heck?" and give Billy his power just before dropping dead.

It takes Billy about three minutes to start abusing the holy gift he's been given.  He destroys the car of the local rich jerk and contemplates stealing a fancy new suit that is less conspicuous than his hooded cape and tights.  Thankfully, Billy does have scruples enough to step in after he and his foster-brother stumble across a mugger at work.  Unfortunately, those scruples stop just short of accepting payment from the woman he just saved. 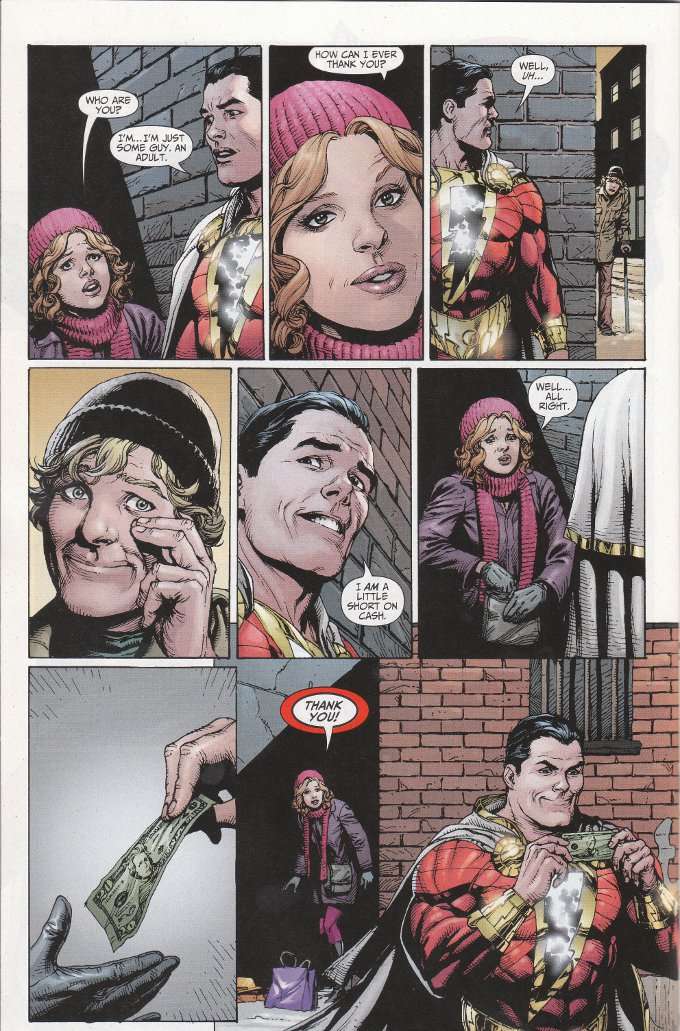 The only justification for Billy's retconned personality I can think of is the misguided belief that an idealistic young man granted power because of his pure spirit has no place in the modern DCU.  To see Billy acting the way he does in this issue is painful.  And to see Geoff Johns writing this story doubles that pain - partly because Johns put the idea that Billy Batson needs to be modernized and made more cynical to bed during his excellent JSA run and partly because - ignoring that Shazam is a betrayal of everything Billy Batson should be - Johns does pace the story well and deliver some good dialogue.

Thankfully, regardless of what I think of the story, the artwork is amazing throughout.  Gary Frank does a good job illustrating the Shazam story while Johns' frequent Green Lantern collaborator Ethan Van Sciver lends his talents to the back-up story.  This brief tale finally introduces us to the mysterious pink-cloaked woman who has been popping up around the New 52 universe as well as another classic hero we haven't seen before now. 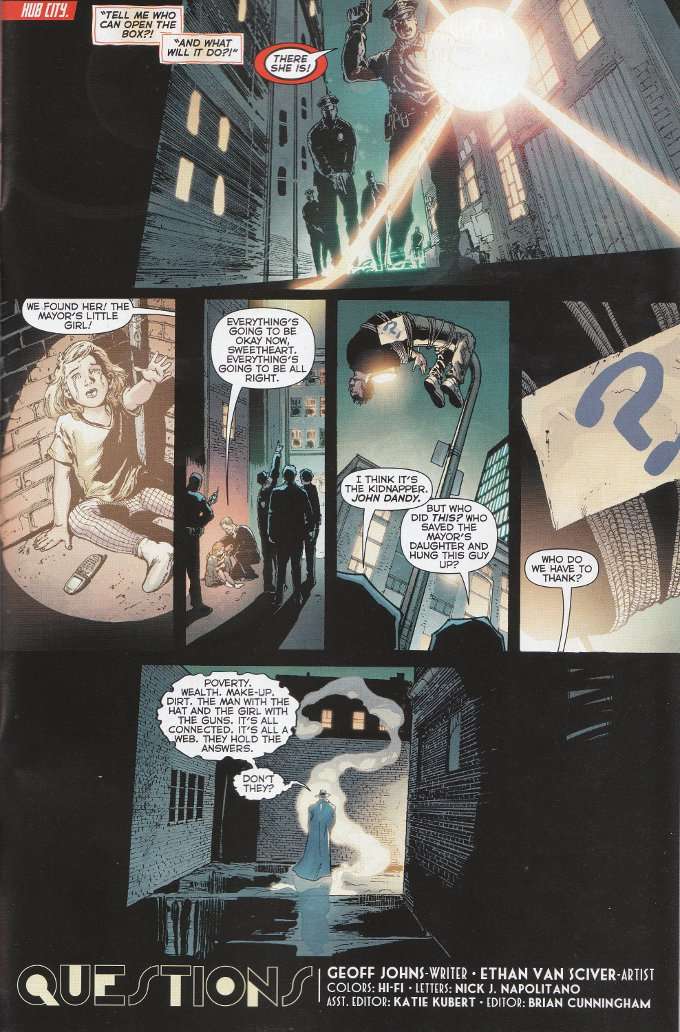 Still, no amount of fine artwork can make this book palatable.  What matter that the face be pretty when the heart is cold and dead?

Billy Batson is supposed to be a decent kid in spite of his hard-luck life.  His positive attitude in the face of all the evils of the world is what leads to his being rewarded with the power to help others.  The character is all about the innocence of youth and the power of idealism.  Even Frank Miller understood that and didn't try to force Captain Marvel into a darker, grittier role when he wrote The Dark Knight Strikes Back.  And it was Billy who took Superman to task for being blinded by his hatred of Lex Luthor in the excellent Justice League Unlimited episode Clash Of The Titans.


Let's end this review with some Wisdom of Solomon, shall we?

"I believe in fair play. I believe in taking people at their word, and giving them that benefit of the doubt. Back home, I've come up against my share of pretty nasty bad guys, but I never had to act the way they did to win a fight. I always found another way. I... I guess I'm saying I like being a hero, a symbol, and that's why I'm quitting the Justice League. You don't act like heroes anymore."

That's why I think I'll be quitting Justice League, too.  Nobody in it acts like a hero anymore.