I dropped Green Arrow three months ago but some of you wrote in to tell me I should give the #0 issue a shot, if only because it was supposed to finally explain Ollie's origin story.

Honestly. One of you might have mentioned that it was written by Judd Winick! 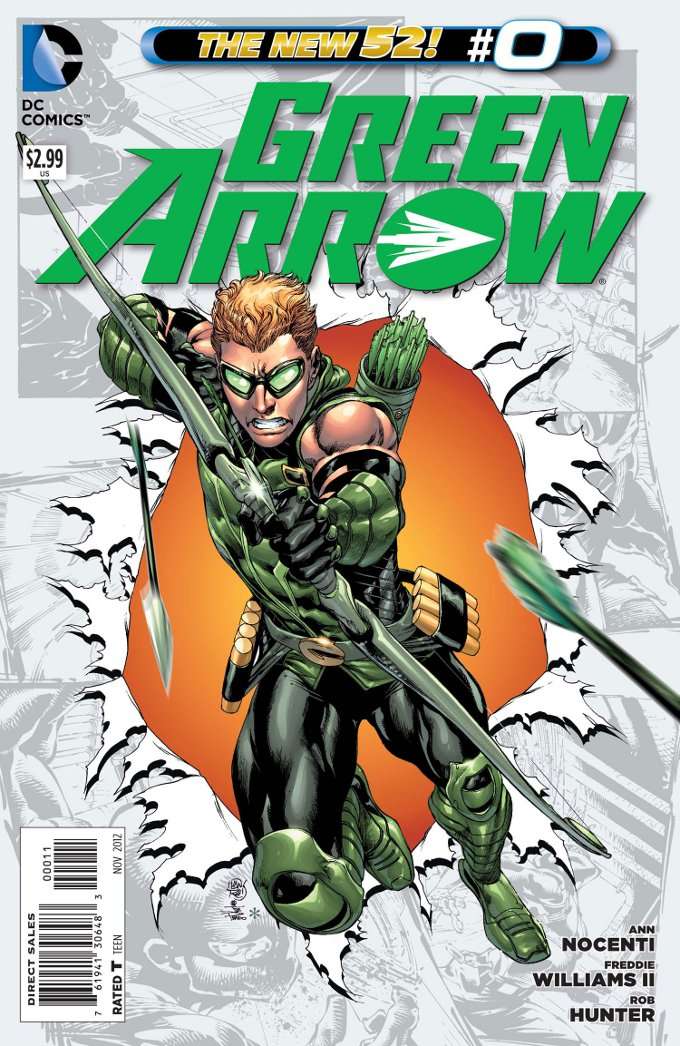 I don't think I can fault you all, though. Even the cover scan on DC Comics website credits Ann Nocenti as the writer. I'd like to think it's because The Powers That Be finally realized that Judd Winick's name is a poison arrow to the heart to all Green Arrow fans. I'd LIKE to think that but given the reports that he was offered the Green Arrow title in order to keep him working with DC Comics (whether this was before or after Nocenti took over the book, I don't know) I know it ain't so.

I'm going to start off discussing the artwork this time because... well, Geebus Suffering Crackers, just look at the first page! 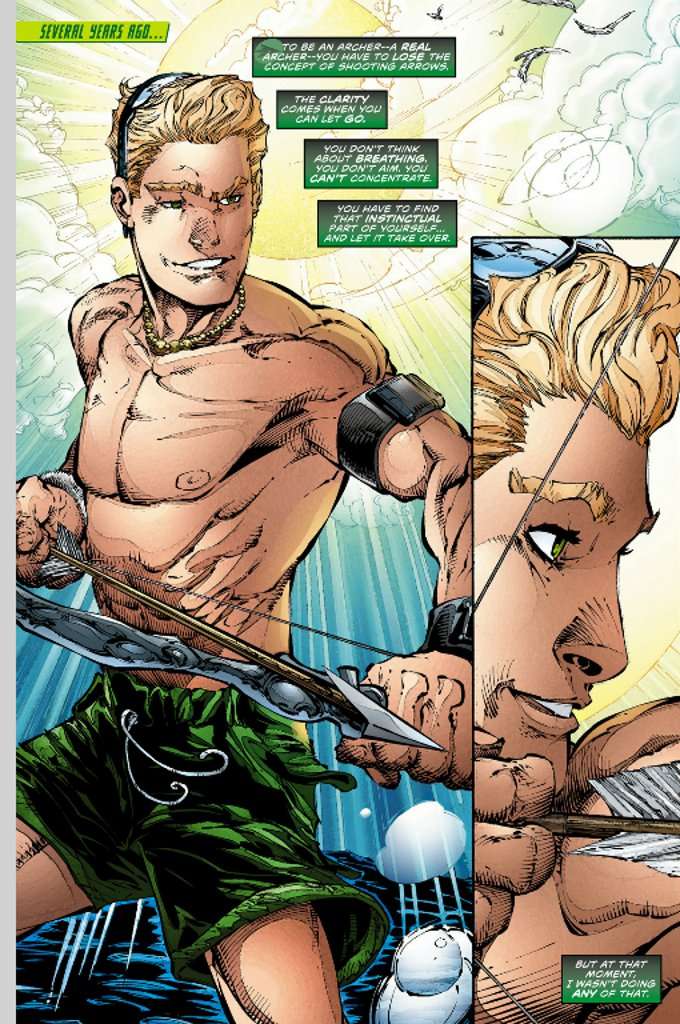 This is the work of Freddie Williams II, whose work you might remember from Captain Atom. Note that Ollie here is missing a pectoral, has an upper-left arm that is out of proportion to the rest of his body and the linework on the middle of his face leaves him looking like he has an arched unibrow. To call Williams' grasp of anatomy off would deny you the chance to use words like abysmal and nonexistent. And yet, thanks to the inking of Rob Hunter, this is still an improvement on Williams' work on Captain Atom, where he handled his own inks and you frequently couldn't separate the characters from the backgrounds.

Incidentally, am I the only one amused that a man named Rob Hunter is working on a book about a superhero inspired by Robin Hood? Probably so. But if that thought does amuse you, even a little, hold on to that happy thought. It's may help you get through what is to come.

Our story opens with 19 year old Oliver Queen throwing a party. On an oil drilling platform his dad owns. Where he's supposed to be working as a supervisor as punishment for having blown off the last three jobs his dad gave him. All of this is explained to Ollie again (and us) with all the subtlety of a fart in a nunnery by Ollie's girlfriend, Leena. 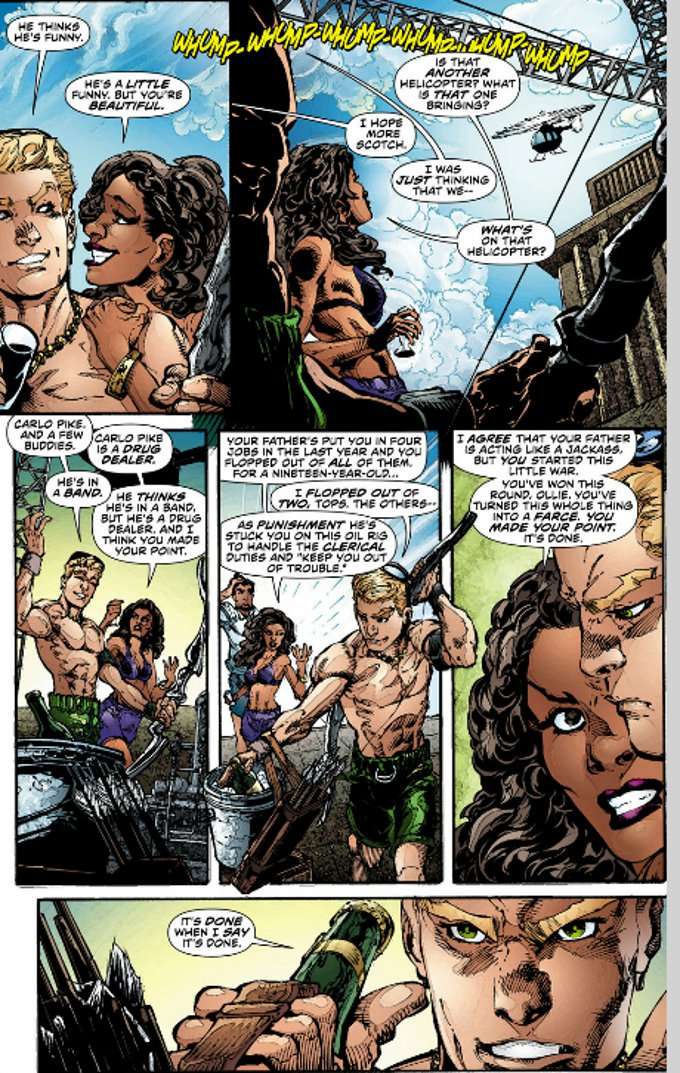 A quick side note about Leena. Leena is your typical Judd Winick girlfriend - going from Bimbo To Responsible in 2.3 seconds. One page she's defending Ollie's archery skills to his best friend. On the next, she's calling Ollie out for his irresponsibility for throwing the party she was enjoying until about two seconds ago. 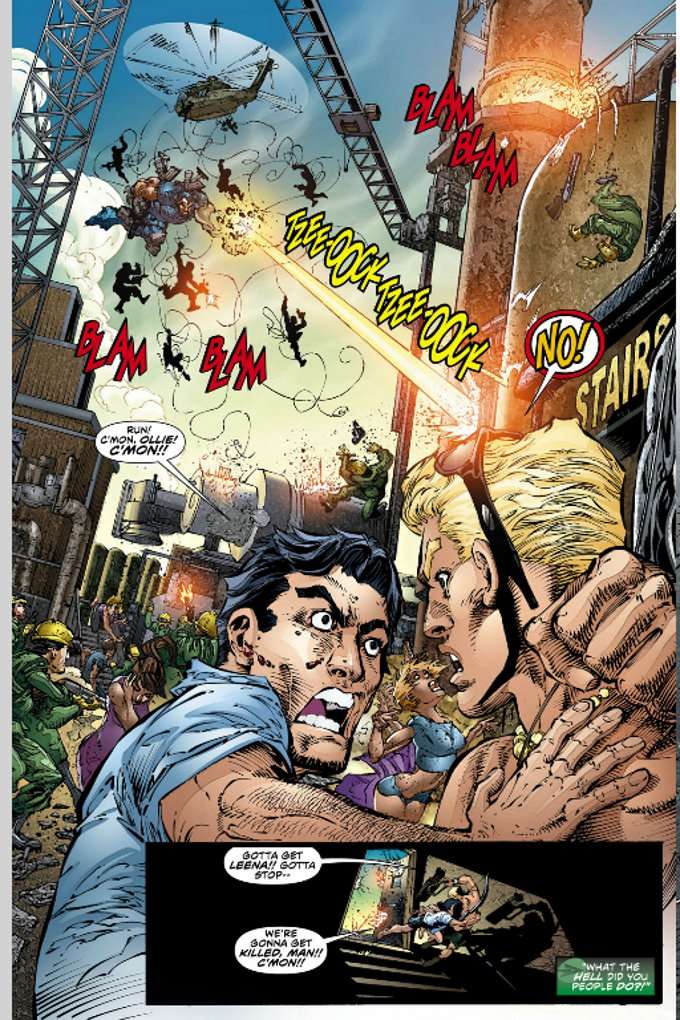 Faster than you can say Louis Gossett Jr., a cyborg terrorist who calls himself Iron Eagle crashes the party and starts trying to steal the oil. And faster than you can shout "WOLVERINES!", Ollie decides to abandon his cowardly best friend Tommy Merlyn and go all 80's action movie.

If the name Tommy Merlyn sounds familiar, you've obviously been keeping up on the announcements regarding the upcoming Arrow series. In that, as here, Ollie's best friend before being shipwrecked is named Tommy Merlyn. I bring this up because out of all the things Judd Winick could have taken from the information about the Arrow storyline we know so far, this point is the only thing he chose to bring over. I could forgive them blatantly ripping off the Arrow pilot - it's a highly anticipated show and the Green Arrow title right now could use all the help it could boosting it sales. But no - the only connection the two have is the name of Ollie's best friend. That's it. 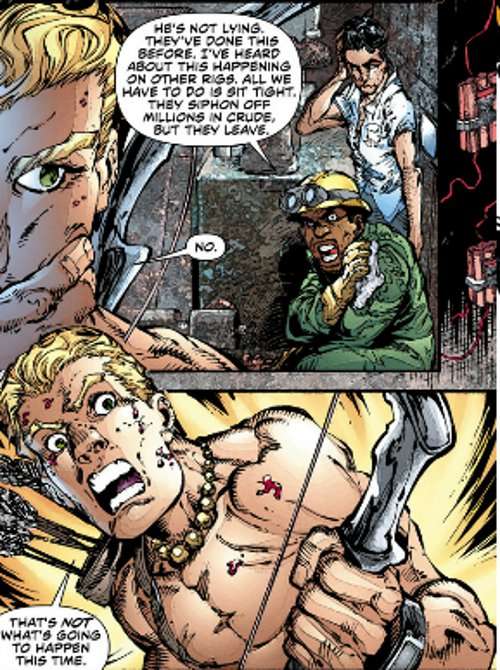 Goofy as Williams' rendering makes the ultimate layout, I have to admit this is an effective sequence. It establishes Ollie as someone who will try to fix his mistakes, taking responsibility for saving the lives of his friends after his lightening security at the oil platform for his party put them all in danger. Oliver proves himself to be resourceful and clever in a fight. And dare I say... he is both brave AND bold.

Of course since this is a Judd Winick story, and Judd has never been able to write a Green Arrow story where Ollie didn't screw up things up in the worst possible way, his attempt to shoot the bomb trigger out of the Iron Eagle's hand goes wrong. Seems the trigger is a dead-man's switch and the sudden lack of pressure results in one big gooey kablooey. Somehow, despite reportedly hiding downstairs, Tommy is suddenly propelled over the side alongside Ollie and is more horribly burned and disfigured than he is. 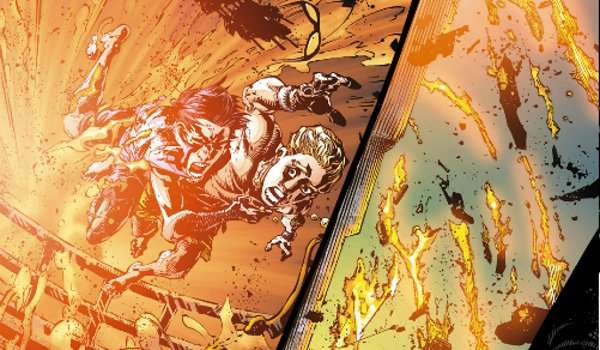 Perhaps the art is meant to imply that Tommy pushes Ollie out of the full force of the blast but - as I've pointed out - Freddie Williams II is a terrible visual storyteller. 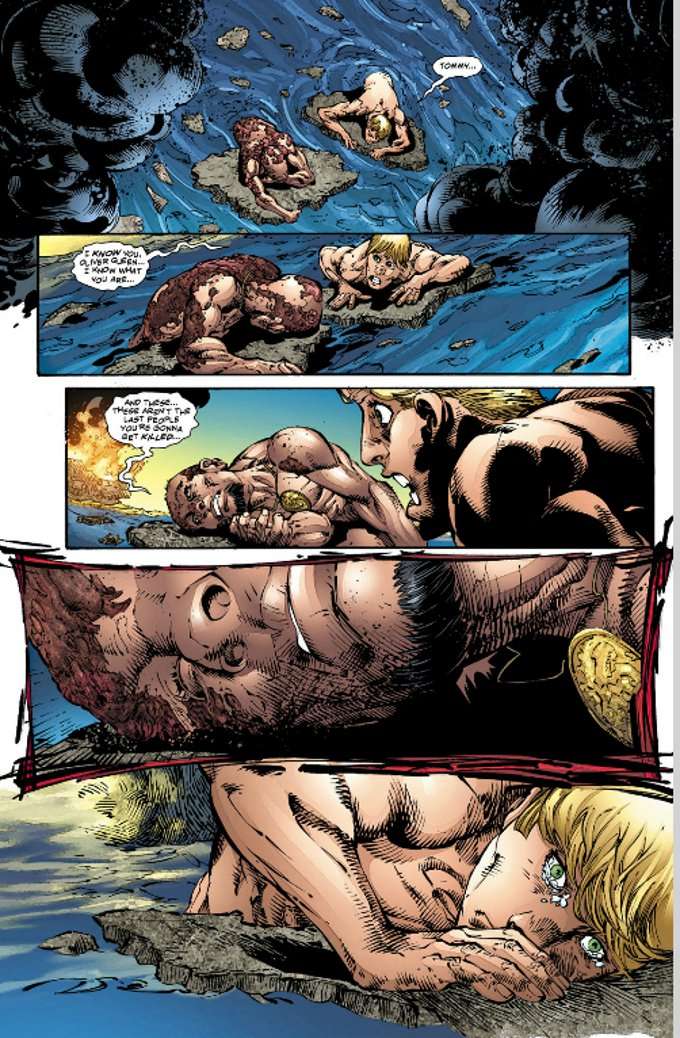 Somehow, despite the two floating on rubble only feet apart and being in the same current, the two get separated. One year and one one-page montage later, Ollie has spent a year on a desert island, somehow having learned how to make his own bow and arrows. This despite there not being any indication that his aforementioned $400 an hour archery lessons also included information on primitive bowery and fletchering or that Ollie had any survival training at all. 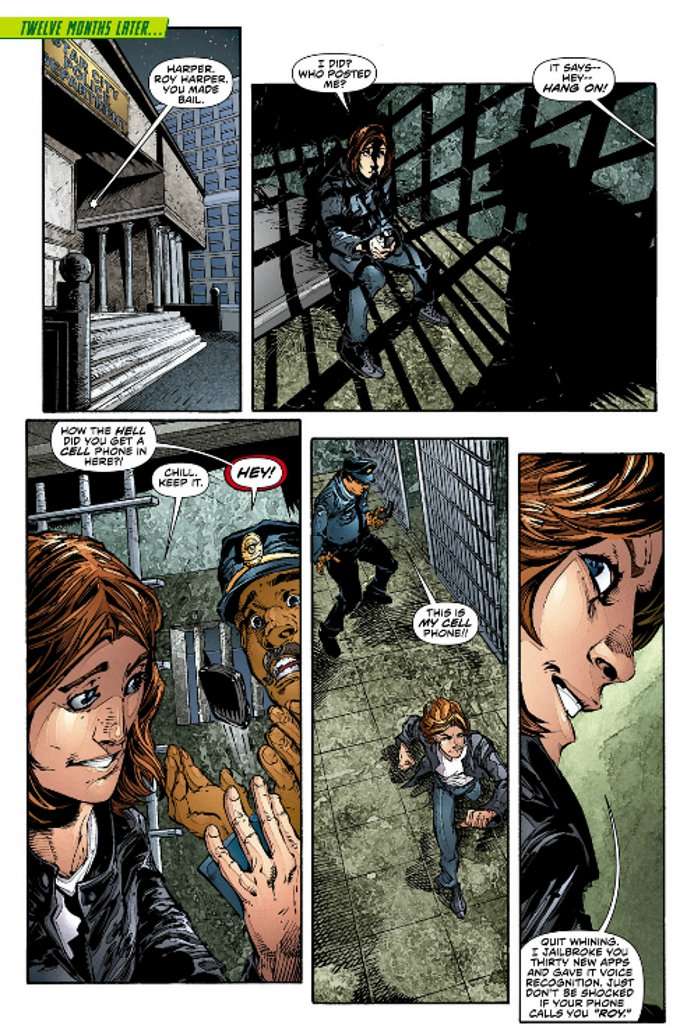 Twelve months later, Ollie is bailing a young rogue named Roy Harper out of prison and press-ganging him into helping him with a crusade to "make things right" after Roy hacked Queen Industries' computers.

Why did Roy do this? What are his motivations? Money? Boredom? Protest? And where did he pick up his mentioned - but not demonstrated - skills with weapons and technology? Why did Ollie think he could assure Roy's loyalty only by bailing him out and offering him a job? Was it a whim? Or some idealism he thought they shared? 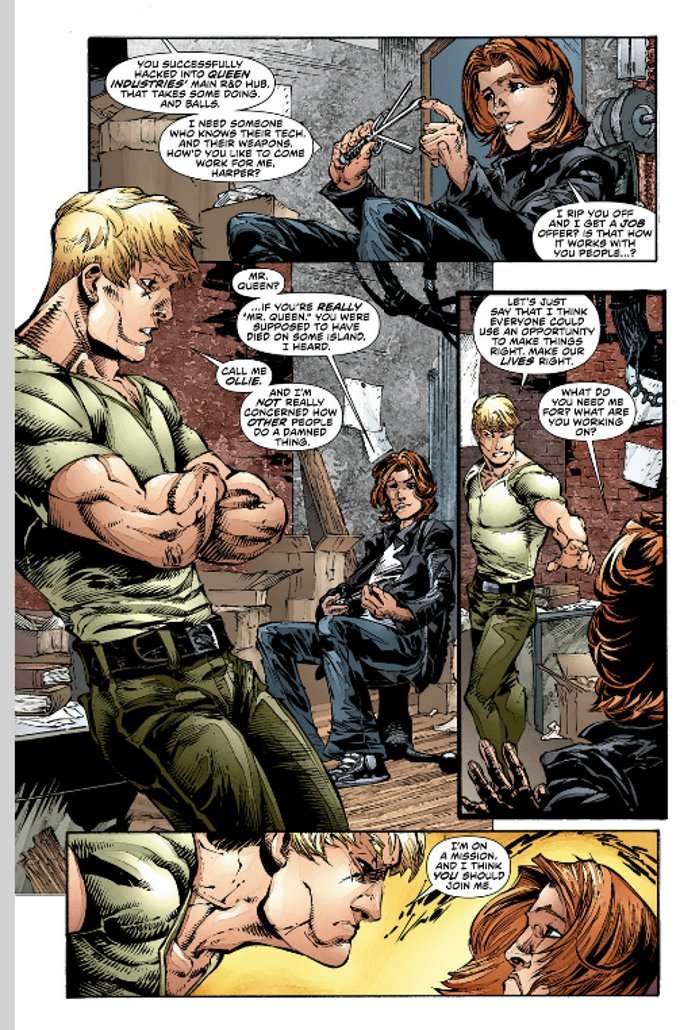 These are all good questions that are completely ignored and will probably be explained later. Maybe. In Red Hood and The Outlaws, once we get done figuring out how to explaining away how Bruce Wayne had four Robins in six years and one of them is a 10 year old ninja he sired with the daughter of his worst enemy. And if you think I'm being glib about them not bothering to explain anything about Roy Harper and his connection to Ollie in this book, take a look at the official history for Green Arrow. 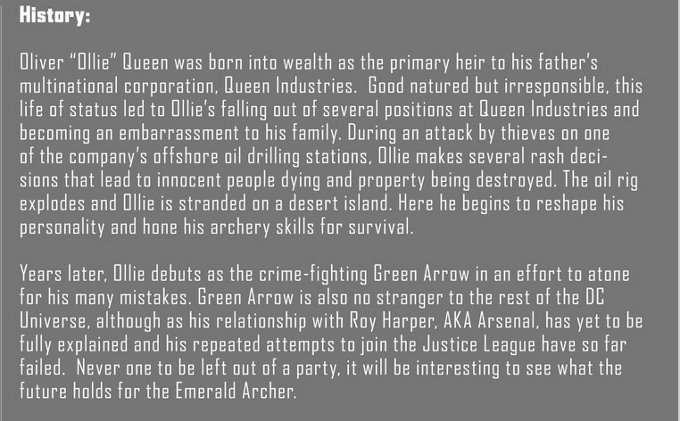 It has yet to be fully explained... because YOU COULDN'T BE BUGGERED TO EXPLAIN IT!

Make no mistake, children - this is a bad comic. It is incompetently produced. Some might guess - justifiably - that it was rushed to completion. The artwork is disjointed, over-stylized and generally terrible. The script explains too little and portrays Ollie as a total boob by forcing him into a situation where his attempts at heroism get people killed, thus attacking the very concept of heroism and taking responsibility for ones wrongs in the first place. And yet, despite that, I have no trouble damning it with the faint praise that this is the best thing anyone has done with Green Arrow title in the whole of the New 52 canon. Make of that what you will.

DC Comics? Please - forget this book, reprint Green Arrow: Year One and send a memo to anyone who might every write Green Arrow in anything ever, which reads "THIS IS HOW YOU DO IT".