Doctor Who, Series 7 - Episode 1 - Asylum Of The Daleks

Many Wholigans were nervous when it was announced that the first episode of the long-awaited Series 7 would involve The Daleks. Even after a full season without any Dalek-based episodes or appearances apart from brief cameos, a strong feeling exists within the fandom that that the Daleks have been overutilized in the new series. Thankfully, Steven Moffat makes this into more than "just another Dalek story" thanks to some thoughtful exploration of the core cast and a pair of upgrades that make The Daleks even scarier while still being true to the horror of the original concepts of Terry Nation. This episode was everything we could hope for in a season opener, save that the continuation of some of the drama involving The Ponds makes this a difficult one to use as an introductory episode for new viewers. 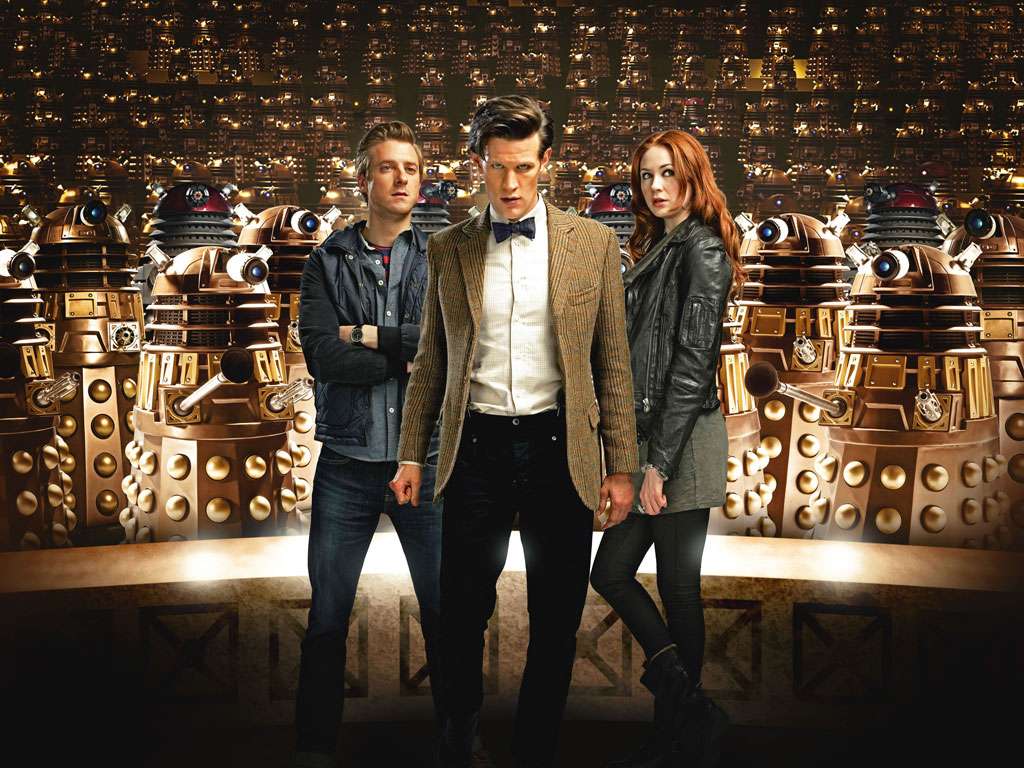 Lured into a trap by a new breed of Dalek/Human hybrid, The Doctor finds himself held hostage along with a not-at-all-pleased to be seeing one another Amy Pond and Rory Williams. It seems The Doctor's favorite couple are having marital problems and were finalizing their divorce when they were captured by The Daleks. Sadly, any discussion on saving their marriage must be placed on hold as The Doctor is charged with a task he never thought he'd be be asked for, let alone accept: SAVE THE DALEKS!

It appears that the inmates have taken over the asylum world where The Daleks keep those members of their race too crazy to follow orders locked away. Since the concept of facing an army of crazed Daleks is scary too scary for even a sane Dalek to cope with, The Parliament of Daleks wisely elects to declare this Someone Else's Problem and send The Doctor and company to deactivate the force field protecting the world, so they can blow it up and eliminate the risk of posed by a bunch of out-of-control Daleks.

But the asylum world has far more dangerous things than even insane Daleks. Things like a nanotech virus that can animate the dead and turn living organic beings into Daleks! And in the midst of all this is a souffle-baking manic pixie dream girl computer hacker named Oswin, who has somehow managed to survive a starship crash onto the asylum world for over a year without getting absorbed...

* Steven Moffat's scripts are always good for their concepts if nothing else. There's a lot of brilliant things in the script. Lots of nice little touches scattered throughout. But nothing is quite so glorious as the concept of Daleks having concepts for what constitutes insanity and standards of beauty. It also neatly explains away the key problem with why a compassion-free race like The Daleks - who normally destroy anything that is not useful to them - would bother with an asylum in the first place.

* On that note, the interplay between The Doctor and the Dalek Prime Minister is perfect and leads to the best verbal burn of The Doctor since "You would make a good Dalek."

* Moffat also deserves some credit for delivering what Evolution of the Daleks failed to bring about - Dalek/Human hyrbrids that were truly frightening. While the horror of humans beings transformed into Daleks hasn't been extensively explored (if for no other reason that that's more of a Cyberman trope) , Moffat manages to subtly convey the horror of that concept with something as simple as a mother who doesn't seem particularly concerned about her daughter being endangered. The effects for the Dalek/Human hybrids are also well utilized.

* Moffat has been accused - not unjustly in some cases - of writing many of his female protagonists as Mary Sues. I don't know if he's intentionally parodying himself with Oswin, who proves to be so utterly capable that even The Doctor (who usually goes manic over someone being as brilliant as him) begins picking her awesomeness apart. Still, the way Moffat handles her character makes the eventual twist truly surprising.

* A lot of the clips from this episode that were used in the trailers, appear to have been written specifically for the trailer. The whole "On a scale of 1 to 10? 11." line and "Who killed all the Daleks?"/"Who do you think?" seem to have been taken from an American action movie rather than Doctor Who episode. And while those moments were awesome in the trailer, they stick out terribly in the context of the episode.

* Amy and Rory's marriage problems are given surprisingly little screen time and what little information we glean comes from an "As you well know" style info dump. Karen Gillian and Arthur Darvill play the scene well enough but it still comes off as being incredibly rushed, particularly given the revelations that Amy is infertile due to the events of A Good Man Goes To War.

* The resolution is similarly rushed and - as annoyed as I am by the continual Rory/Doctor/Amy triangle, I do not want this plot-line to be dismissed so easily.

* Speaking of plotlines that won't go away, can we please, PLEASE stop playing the "Rory is an idiot" card for cheap laughs? Time and again Rory has proven himself and the gags about him being slow on the uptake and ignored in the wake of his far more assertive wife and the more take-charge Doctor was old last season.

A solid opening for the new series, despite some rushed character moments. The cast continues to rock it and Moffat manages that most impossible of writing feats - a Dalek story that doesn't seem to be rehashing the same old territory.
Posted by Starman at 10:05 AM