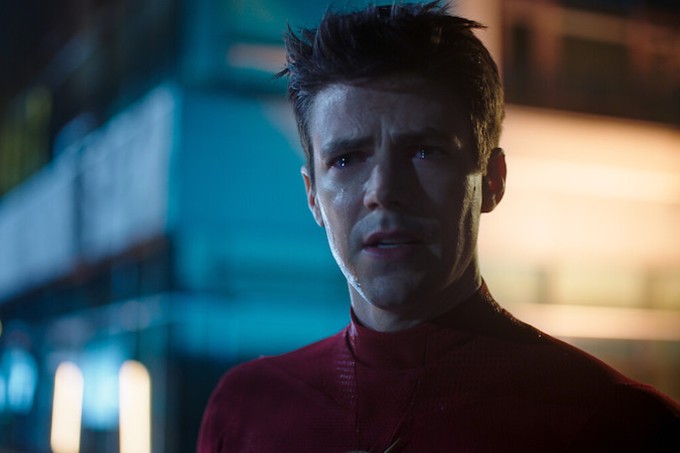 With Barry having suffered a major loss, the team rally around him in the darkest hour yet.

The Flash comics of Joshua Williamson.

This is the last episode to feature Jesse L. Martin as a series regular.

With this episode, The Flash surpassed Arrow as having the most episodes of any Arrowverse series.

Reportedly, this was originally planned to be the series finale, but a new ending was written when the series was renewed for Season 9.

Impulse describes a situation as "all aster, no dis." This is a nod to Young Justice, where the young heroes routinely took apart words, such as when Robin wondered why people were overwhelmed or underwhelmed but never just whelmed.

The blue crystal in the future shown in the final scene may be a nod to the villain Cobalt Blue - a Flash villain from the comics with connections to both the Allen and Thawne families.

Barry plans to enter the Negative Speed Force by using a concentrated blast of dark matter and negatively-charged lightning in conjunction with his tachyon harness.

Chester reports detecting a huge influx of negative kinetic tachyons right before the Reverse-Flash appears in downtown Central City. He later detects negative kinetic isotopes with temporal, geothermic, and electric chemical readings, corresponding to the effects of the other Forces.

The reborn Reverse-Flash confirms that the Negative Forces brought him back to serve as the Negative Speed Force avatar, due to them being too weak to function without a fourth member of their circle.

Barry tries to kill the Reverse-Flash, but is stopped by XS and Impulse.

Barry finally relents on killing Reverse-Flash when XS and Impulse point out that if they're still alive, Iris couldn't have died yet. (Or that there's still a chance of fixing the timeline.)

Barry plans to go into the Negative Speed Force, theorizing it is the only place Thawne could hide from him after Chester can't find any sign of him on Earth-Prime.

Barry continues to insist that he felt Iris die and that he can't feel their connection anymore. He also fears she may have been erased from reality completely but the changes haven't caught up with them yet.

Iris wakes up in the same empty space dimension from 805 and is greeted by a remnant of Damien Darhk's memories.

Cecile tells Barry she can feel him radiating anger.

Cecile suddenly feels an intense sensation of frustration, right before having a vision of Bashir (aka Psych) the Sage Force Avatar.

Cecile believes Bashir wants her to find him and the other Positive Force Avatars.

The Negative Forces reveal that Eobard Thawne did not tap into the Negative Speed Force with his machine.  The Negative Force tapped him, choosing him as an avatar because it fed off of his hatred for Barry Allen to empower itself.

Damien confirms that the Negative Forces used Iris as an incubator to create a new Negative Speed Force, in much the same way Barry and Iris' love allowed the Speed Force to be reborn.

Damien explains that the Time Stone he gave Joe acted to save Iris, because she wasn't meant to die at this point in time and that there's something important she's meant to do in the future.

Meena almost destroys her Artificial Negative Speed Force trying to give Barry a jump-start. Barry persuades her to charge herself up so that she can give her power to him.

Joe West is shown at his home, praying for Iris to return home safe, when the Jay and Joan Garrick of 2049 show up. They explain that they followed Iris' particle trail across time to Joe's house. This eventually leads them to the Time Stone, which Jay recognizes, having heard about it in his travels.

With the reluctant help of Queen and Top, Cecile attempts to make contact with Psych. He appears briefly and confirms that the time sickness that infected Iris and Deon Owens spread to the Sage Force and Strength Force.

Psych also explains that he saw potential in Cecile and opened the floodgates in her mind. This caused her to steal the powers of Queen and Top by accident.

Barry travels into the Negative Speed Force and confronts the other Negative Forces.

The Negative Forces explain that Barry disrupted the cosmic balance in 805 when he depowered the Reverse-Flash instead of allowing him to be erased from existence. Before that, they had no idea it was possible to upend the balance in such a fashion, This gave them the idea do the same thing, but to their benefit, turning the Reverse-Flash into an avatar of all the Negative Forces.

The Reverse-Flash dons a new black version of his original costume when he returns to Central City.

Damien Darhk gives Iris a pep-talk, telling her that she is a survivor who is too stubborn to die and that even if the spark between her and Barry is dead, it can still be reignited.

Reverse-Flash hits Impulse with lightning and sends him back in time a billion years.

Using the Psych mask, Cecile is able to transfer her power to Bashir. This somehow allows him to heal the rest of the Positive Forces.

The Positive Forces Show up and give their power to Barry, giving him the chance to fight Reverse-Flash evenly.

Barry is able to hold his own against Reverse-Flash, but the two of them wielding all the Forces is threatening to destroy Central City, if not all of reality.

Jay runs Iris to the battle so that Barry can see she is alive.

Instead of fighting Reverse-Flash, Barry meditates on maintaining everything.

Reverse-Flash burns himself out trying to summon more power to destroy Barry.

Barry uses all the power he has to restore things so his children and Meena return.

The universe rights itself after.

Chester confirms that Barry's extra Force powers are gone and that Iris' time sickness is cured.

Gideon confirms there are no more Eobard Thawne remnants anywhere in the timeline.

Meena confirms the BLOC is no longer working and that she's lost her powers.

Barry and Iris give Meena the yellow tie worn by the reformed Eobard Thawne she loved.

Barry and Meena both offer each other help with whatever they might need help with in the future.

The Top and Queen are both confirmed to have their powers back, with The Queen being locked up in Iron Heights again.

Cecile is revealed to have developed telekinetic powers.

The Flash reunites Tinya Wazoo and her mother Renee.

The cryonic chamber Chillblaine build malfunctions. He tries to take Caitlin Snow out of it, but is confronted by someone he doesn't recognize. She has the same voice as Caitlin and Frost, and introduces herself as "A friend, I think."

Barry and Iris enjoy a quiet night in, but Iris worries that the Negative Speed Force will find another avatar to replace Thawne.

A messy end to a messy season. The best that can be said is that it does tie up all the loose ends except for what is happening to Caitlin and Frost. (This was likely due to the need to work around Danielle Panabaker's second pregnancy.) Hopefully Season 9 can give the series and the Arrowverse a proper ending.