Being A Hero - Thoughts On Cosplay And Doctor Who

A couple of years ago, I was asked by a friend if I'd write something about cosplay for their blog. This led to my first and only appearance talking about cosplay at an Anime convention, which was a bit confusing as I hardly knew anything about Anime at the time and have yet to cosplay an Anime character.

Still, I recall being very proud of this piece at the time and being told more than a few people were moved to tears by it.

Naturally I never thought of republishing it on my personal site. Until now. Which was prompted by my finally getting around to listening to the audio book of Doctor Who: Scratchman by Tom Baker and being astonished that the final "PS From The Doctor" ended with the words "Mind you, if someone like me could get away with being the Doctor... Well, who's to say you can't too...?"

With that in mind, I delved into archive.org, recovered this lost text, and restored it here.

I dedicate this, with respect, to Tom Baker, for all the inspiration, and to anyone who ever donned a costume to make children smile.

Not too long ago, actor Tom Baker - most famous for playing The Doctor on Doctor Who - celebrated his 80th Birthday. On this occasion, he granted an interview where he spoke a bit about the role and the show. He said many interesting things (as he usually does in his interviews) but the one thing that stuck with me was that he stayed in the role as long as he did because of how happy it made him and how much he enjoyed “being a hero.”

I can relate. Because that is how I feel every time I am The Doctor. 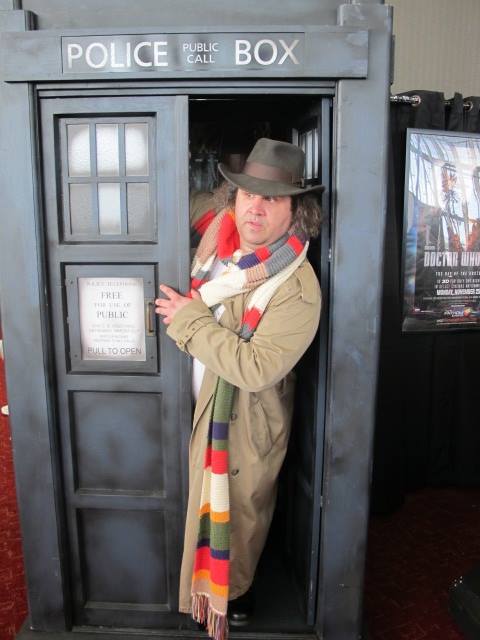 It is worth noting at this point that I have never played The Doctor in any professional capacity. Nor, being an American and a Texan, am I ever likely to do so without the ravens leaving The Tower of London and King Arthur rising from the dead in response! But I have played The Doctor many a time in an amateur capacity, clad in a long coat and longer scarf.

I’ve managed this trick despite not looking very much like Tom Baker apart from having brown curly hair and a striking voice. He is tall. I am not. His eyes are bluish-grey and usually wide open. Mine are brownish-green and usually half-closed. And yet, for many young children at sci-fi conventions, I am The Doctor.

The first thing I learned being The Doctor is that you must always have a bag of Jelly Babies upon your person. Because it is certain that if you don’t offer them to everyone who recognizes you upon meeting them, they will ask if they might have one. And if you don’t have one to give them, you’d better have a good excuse why not. My best one is that convention security confiscated them AND my Jammie Dodgers thinking they were deadly weapons.

The second thing I learned about being The Doctor is that dressing in an outlandish and instantly recognizable outfit does little to dissuade parents that you are not a dangerous maniac when you offer their children strange candies. Until the first time I had a parent look nervous after I asked their toddler “Would you like a Jelly Baby?”, it had never occurred to me that I was doing precisely what we instruct young children to watch out for strangers doing. For all they knew, I might have a windowless white van instead of an old blue box!

After that, whenever a child asked me for a Jelly Baby, I’d smile and say “Thank you for asking so politely, but that’s up to your parents.” This worked quite well for a time. And yet no matter how well you plan these things you can still get thrown for a loop, as I was this past fall.

I was dressed as The Doctor at a shop in the Dallas/Fort Worth area - The British Emporium - which holds a yearly Doctor Who festival. There were two little girls who recognized me and shyly came up to me to say they liked my scarf. I thanked them and complemented their Dalek-knit caps, noting they did make me nervous until I remembered that Daleks weren’t that small.

The older of the two asked if she might have a jelly baby. Before I could get my line out, her mother - who was watching this from a distance - said “I’ve told you not to take candy from strangers!”

“He’s not a stranger! He’s The Doctor,” said the girl with all the gravity a pre-schooler could manage.

At that moment, I was both inspired and mortified in equal measure. I was touched that this girl could believe in me like that… even if the reward for that belief was free candy. And I was frightened as I pondered just how easily the monsters of this world could take that trust and abuse it. 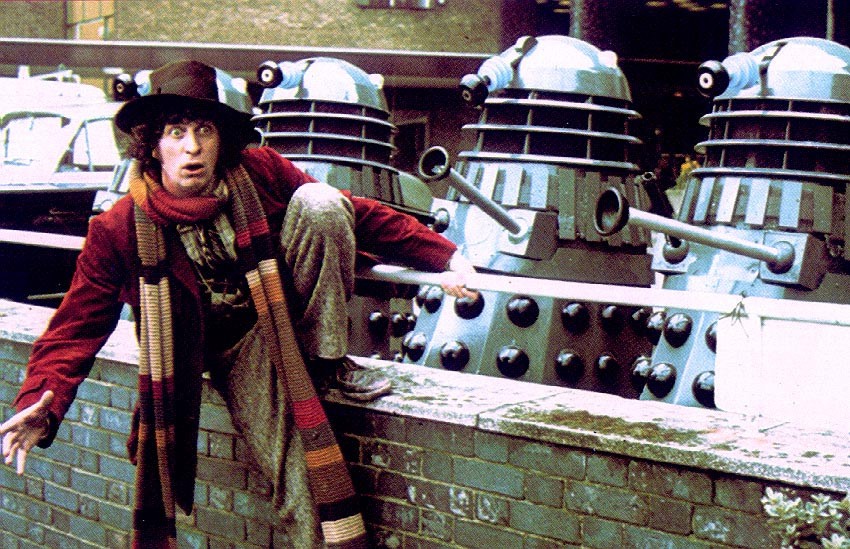 The Doctor could look like anyone, after all. And he’s turned to children for help before. How many children might be lured away from their homes by a cunning liar promising Jelly Babies and a quick trip around the universe? It’s a frightening thought and one that never entered my head until that moment. Because when you’re The Doctor, these things never enter your head. You’re so busy focusing on the smiles of the people and laughter of children around you that such things never occur to you.

This is why, I think, The Doctor becomes so very angry and very horrible whenever something takes him out of that place. Because he’d like nothing more than to just enjoy how wonderful the universe is yet can’t stand idle while bad things are happening. And that’s why he’s made it his business to be the thing that monsters everywhere have nightmares about.

I can’t make claims to such heroism in my occupation as a youth services librarian. I’ve never disabled a Dalek or stopped a Sontaran. But I have helped a boy hide from the father he wasn’t supposed to let pick him up from school. And I have confronted a patron who thought the best way to deal with a teen whose phone went off in the middle of the library was to slap the phone out of the young man’s hand then forcibly drag him to my desk.

Not exactly saving planets, admittedly. But I did help a boy to run from his monster. And I got another monster to see himself for what he was by politely but firmly pointing out that it’s generally unacceptable to strike and grapple a child that isn’t yours in full view of 20 people in the middle of a library that is two minutes away from the nearest police station.

Most afternoons I run an after-school program that gives the local teens a place to get away from their problems for an hour or two. It’s not a ride on the TARDIS, but it gets the job done most of the time. When it doesn’t, I can be that one other thing a lot of kids don’t have - an adult who will listen. Not advise. Not lecture. Not preach. Just listen.

Email ThisBlogThis!Share to TwitterShare to FacebookShare to Pinterest
Labels: cosplay, Doctor Who