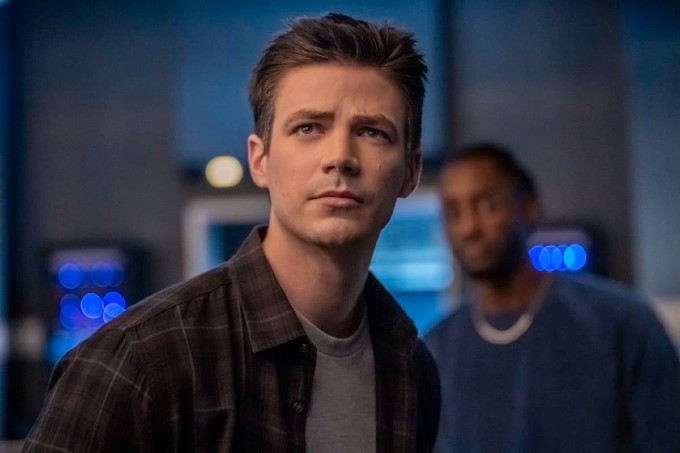 An odd energy attack leaves Barry aging prematurely whenever he uses his powers.

Why doesn't Dr. Orloff just kill The Flash either of the times he knocks him out?

Why doesn't Team Flash try to call Caitlin to see if she can figure out some kind of way to cure Barry or at least negate the process that is causing him to age when he uses his powers?

It's a minor thing, but Joe dresses up as a wizard when his character is an Orc barbarian. (He even makes Gandalf references.)

There's no good reason for Barry to trash Caitlin's lab with a lightning explosion other than it looks impressive. It's also potentially dangerous given all the chemicals and equipment she has and he could just as easily disassemble everything at super-speed.

The scenes of Barry discussing dementia with Cecile are a powerful moment for both Grant Gustin and Danielle Nicolet are powerfully played.

The old-age make-up for Grant Gustin is good.

The direction for the episode is top-notch, with the comedic elements being perfectly telegraphed.

The episode title comes from a short story by F. Scott Fitzgerald about a man who aged in reverse, being born as a 70 year old man and regressing into infancy. It was famously adapted into a movie starring Brad Pitt in 2008.

This episode was directed by Caity Lotz, who plays Sara Lance in all the Arrowverse series.

Chief Singh makes reference to a Steve Palmer case which gave him and Joe trouble back in the day. Steve Palmer was the name of an actor who played The Flash in a movie in The Flash Vol, 1 #118.

A Gamma Absorption Array use bursts of gamma radiation to interact with cellular structures. It could be used for almost anything, from growing super crops to taking out an entire army.

Based on the second scan, Chester determines that the gamma radiation in his cells is being activated by the Speed Force energy in his body. In short, the more Barry uses his powers, the faster it wears down his body and makes him age.

A 10-85 is the police code for a delay due to an unspecified event - in this case, a coffee break.

After Barry's third full-body scan, Gideon declares that the connections of Barry's hippocampus are showing gradual decay, although his using his powers seems to be accelerating the decay.

The energy amplifier Dr. Orloff stole from Magnus Labs could allow him to expand the energy wave generated by the Gamma Absorption Array 100 fold. This would allow him to drain all life force from everyone in Central City, making him immortal at the cost of their lives.

When Chester says the device can't be unplugged due to the cascading degradation cycle in the gamma isotopes, Barry gets the idea to overload the machine with his own energy instead.

Barry's forcing the gamma array's field backwards completely inverted its energy charge. This not only restored Barry to his original age, but actually deaged him to the point that he is 29 years old biologically. (Barry is supposed to be 33.)

The Flash: You okay? Don't worry about that guy. I just dropped him off at CCPD.
Old Woman: Saved by Mr. Flashy himself! (reaching into her purse) Oh, I've gotta give you a nice, big reward.
The Flash: Oh, no, that's not necessary. I can't accept your money, I...
Old Woman: But it's butterscotch.
The Flash: Oh. (laughs) Thank you. That's very sweet of you.

(Barry describes the decay of his body to Cecile and his fear of dementia.)
Barry: When I run, my bones ache. Like they're made of glass, and... my hands won't stop shaking. I'm always out of breath, and it's getting harder...  It's getting harder to... remember the people I love.  My friends. Nora, Bart, Joe. Even Iris. What if I forget who she is... before she comes back?  I thought I had plenty of time to get Iris back...And live my live my life with her. Now it's all fading away, like my body. And now, with my mind going, too... it's like losing everyone you love...  All at once.

As the episode opens, Barry stops two robberies (one at CC Jitters) and saves an old woman from being run over by a distracted driver.

Ironically, the distracted driver is listening to the novelty song Grandma Got Run Over By A Reindeer while looking at his phone while driving.

The old woman offers Barry a butterscotch for saving her.

Allegra runs a Dungeons and Dragons game for Barry, Joe, Cecile and Chester. Barry is the group' cleric and Joe is playing Karash the Orc.

Barry started playing D&D after Iris made him try it.

Barry still has no idea what happened to Iris, but is confident she'll be okay since she apparently still exists in the future of 2049.

Barry is called into work by Chief Singh, who has been covering for him the whole day, saying that Barry was in his lab.

Chief Singh had no idea that Captain Kramer knew that Barry was The Flash or that she had figured it out on her own. He does take pride, however, that he figured it out first and far more quickly.

Chief Singh called Barry in on a high-profile tech heist at Mercury Labs. Whoever the thief was, they were smart enough to wipe the security footage before stealing a Gamma Absorption Array.

After quickly searching every abandoned warehouse in the docks, Barry finds a van with the same tire treads as the one used in the Mercury Labs robbery. It contains the array, but it's been heavily modified.

Barry is hit by an energy wave which knocks him out, after being confronted by a gloating older man in a lab coat.

Chester determines the energy wave caused Barry's internal organs to age 30 years overnight. This explains why he looks young on the outside, but his joints, bones and organs are weakened.

The blast also caused Barry to lose control of his powers, so he can no longer phase through solid matter or create focused wind blasts with his arms.

Captain Singh checks in on Joe and finds him getting frustrated while trying to program a robotic vacuum. He offers to help him.

Jenna is said to be in pre-school now, giving Joe much more free time at home.

Barry guesses that his top speed is now Mach 10, but thinks that is still fast enough to stop this scientist,

Barry responds to reports of a break-in at Magnus Labs. This time, the scientist does not bother to wipe the security footage.

Barry can no longer throw lightning and is once again knocked out by the evil scientist.

Upon returning from the Magnus Labs break-in, Chester determines that Barry is now near-sighted and his hair is now going gray.

A second scan determines that Barry has aged another ten years.

The team identify the scientist as Dr. Pytor Orloff - a former technician at Corbin Taft Industries, who was fired for using company resources on unsanctioned research.

Barry mistakenly calls Dr. Orloff Dr. Olsen. as he decides to go to Corbin Taft Industries to see what they can learn about him and his work.

Cecile insists on going with Barry, staying her powers will warn her if he tries anything.

Joe and Singh can't get the vacuum to work and Joe becomes very frustrrated.

Singh recalls how he hadn't seen Joe that upset since the Steve Palmer case.

Barry finds Orloff's old laptop in storage, but accidentally triggers a facial ID scan. This triggers an automatic erasure of the hard drive.

Barry becomes confused again, saying he needs to run the laptop to Chester at the CCPD instead of STAR Labs.

Barry tries to run himself and Cecile to STAR Labs and they wind up in China instead.

Chester determines that Barry using his speed again could kill him at this point.

Chester was able to stop the countdown on Orloff's laptop, but says it will take more time for him to hack it.

Barry checks the Starchives for something to contain the Gamma Absorption Array while the rest of the team monitor STAR Labs satellite feeds looking for gamma radiation spikes.

Singh reminds Joe that the reason why the Steve Palmer case took them so long to crack was that Joe refused to learn how to use the new computer system the police had adopted. He suggests that Joe has always been slow to react to change.

Singh also points out that all the best things in Joe's life came from his embracing the unexpected... like his raising Barry Allen.

Cecile finds Barry wandering the halls of STAR Labs, having forgotten where the Starchives are.

Barry tells Cecile he's scared that he might die before finding Iris, but he's even more scared that he keeps forgetting the people he loves as his mind deteriorates.

Cecile tells Barry about her grandmother's battle with dementia but how it didn't stop her from trying to make every moment count for as long as she lived.

Chester breaks the encryption on Dr. Orloff's computer and discovers he was trying to find a way to reserve the aging process. He concludes that the device Orloff stole from Magnus Labs, coupled with the Gamma Absorption Array, could make him immortal at the cost of killing millions.

Barry has a heart-attack while running around Orloff and Chester determines he just aged past 100.

Barry is able to match the energy output of Dr. Orloff's devide, containing the energy wave and then overloading it.

The second inverted energy wave restores both Barry and Orloff to their original ages.

One week later, Allegra is running another RPG. This time, Chief Singh has been invited to join in.

Chief Singh asks Allegra if she ever considered taking on a code name. Allegra says she prefers to be more low-key about her powers.

Allegra planned to run a police-themed game Joe would be able to get into more. Joe surprises everyone by dressing up as a fantasy character and suggesting that he use barbarian rage and his vorpal sword to kill a monster.

Dr. Tannhauser calls Barry and asks if he's seen Caitlin. Barry says he thought she was with her.

Barry goes to Caitlin's apartment and discovers her secret lab.

Caitlin tells Barry about her plan to bring Frost back, but Barry says this is wrong.

Caitlin asks Barry if he can honestly say he wouldn't do the same to save his parents.

Barry destroys the lab with a focused lightning blast and leaves Caitlin in the wreckage, crying.

Somewhere in China, along the Great Wall.

A solid filler episode which manages a surprisingly sensitive and accurate portrayal of the problems of dementia amid the science-fiction scenario. Shame it's ruined by Barry's uncharacteristic lack of compassion for Caitlin in the final scene.