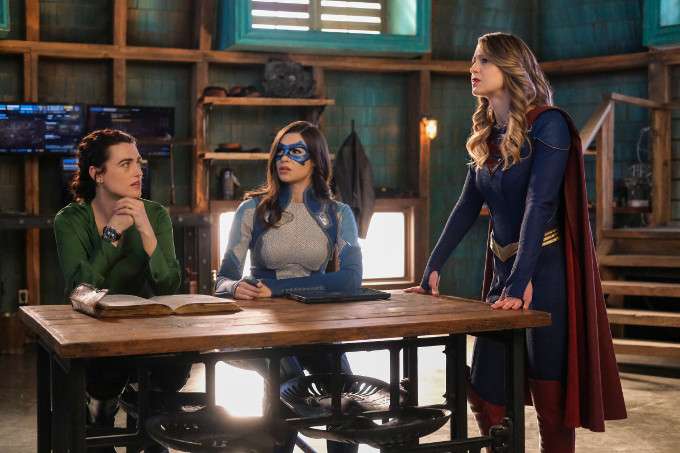 The hunt for the second Totem is on, but Lena doubts she can use her newfound magical powers to help the team. Meanwhile, as William struggles to write a story that will satisfy Andrea's demands for dirt on the Super Friends after being embedded within the team, Kelly is forced to step in when one of her charges faces trouble in her new home.

Harry Potter (the magic connection between Kara and Nxyly resembles that between Harry and Voldemort), Marvel's Infinity War (the hunt for the Totems mirrors the search for the Infinity Stones) and Dragonball (the idea of magic artifacts that can alter reality that exist on each planet sounds a lot like the Dragonballs)

The team discuss the need to keep Lena's connection to the Super Friends a secret from William, but he's later seen interacting with her without issue even before they let him in on the secret and he agrees not to report on it.

J'onn phases his hand through a window to attack a car-jacker, only to break the window pulling the car-jacker through it, causing needless damage to the car.

The NCPD appear to be completely AWOL during the rioting.

It was previously said that the Totems have to be acquired in a certain order. That rule seems to have been abandoned in this episode, with Nxyly looking for the Hope Totem and the Super Friends searching for the Dream Totem.

Katie McGrath and Melissa Benoist's interactions as Kara and Lena are the episode highlight.

The special effects of the Super Friends protecting National City are pretty good.

Dreamer notes the Watchtower can patch into the NCPD's CompStat and track crimes in real-time.

Lena found a spell in her mother's book that can find lost things, which she thinks she can use as a tracking spell to find the Humanity Totem using the discharged energy signature from when Nxyly activated it.

Lena says the air from within 30 feet of where Nxyly activated the Humanity Totm would be hyper-ionized and she can use that air for her tracking spell.

Sheep Laurel is a flowering shrub unique to the Limestone Barrens of Newfoundland.

The kitchen in the Watchtower has a coffee maker which Brainiac-5 picked up on Corvon-4.

Lena says that all the Totems radiate the same form of ionized particles and that she can use the sample of one to track the energy signature of another. However, she only has another particles to track one.

Dreamer: Patching into the NCPD's CompStat technology, we can track real-time crime incidents represented by the blue dots.
(Everyone just stares at Dreamer. She's not usually the one to use that kind of terminology.)
Dreamer: Well, don't look so surprised. I'm smart too. You guys are just showoffs.

Supergirl: I can't believe you would not help.
Lena: Not if it means losing who we are in the process because then we're no better than she is.
Supergirl: I know that you are still processing the fact that you can use magic, and I know that I've been pushing you out of your comfort zone. But that's only because I believe in you, and... I'm... I'm terrified. She makes me feel powerless. Nyxly's magic is unlike anything I've ever faced. I feel like I don't know how to beat her, and if she gets all seven Totems, I won't be able to. You can do something I can't. I need your help, Lena.
Lena: From everything you've told me about Nyxly, she's more than just her magic. She is cunning and manipulative and cruel. Who does that remind you of?
Supergirl: Lex.
Lena: You've beat him before and you will beat Nyxly too, but not by doing whatever it takes to win. By doing the right thing. My mother hurt people with her magic. Unintentionally, but... She hid the truth of what happened, and that secret destroyed lives. I'm so sorry. Nyxly has caused so much pain. And I don't wanna hurt anybody with my magic or deceit.
Supergirl: You're right. Mmm, you're right. We can't cross lines in darkness, however good the reasons. Secrets are hard to hide in the light of day. But maybe... But maybe the light of day is just what we need.

Nxyly: How can I be expected to get anything done when there's so much suffering on this planet? If only I didn't have this damn cuff, I could snap away poverty, disease, hunger. I could save the snow leopards from extinction. Am I the only one that cares?

The Super Friends play Jenga at their latest game night.

As the episode opens, Brainiac-5 is on the Legion ship scanning for Nyxly.

Lena is still going through her mother's spellbook but she's having a hard time grasping how magic works since it is based more on instinct than logic.

Dreamer comments this sounds like her problems with interpreting her dreams and offers to help Lena with her book.

The Super Friends agree to let William Dey observe them in the Watchtower, but within certain parameters.

Kelly says she won't be able to hang around the Watchtower as Guardian, as she needs to spend the next morning checking on Esme, one of the orphans from the same group home as Joey Davis.

Esme, who appeared in 609, was just placed in a new foster home with a couple named Dana and Joe Ford.

Kara starts laughing randomly, as she senses that Nxyly is happy.

Nxyly is happy because Mitch just detected the next Totem in National City.

Esme is doing well in her new home and likes her foster parents because they make pancakes for dinner if she wants them.

J'onn reveals his secret identity to William, as does Alex. They do this after William asks how Kara and Nia developed a close connection to the former Martian head of the DEO.

William learns that J'onn's PI office is the front for the Watchtower.

The conditions of William being allowed to work with the Super Friends are that he can't disclose the location of the Watchtower, identify the Super Friends whose secret identities he knows and he can't try to figure out who the ones that maintain their secret identities (like Supergirl) are. J'onn says that he he tries it, he will wipe his mind. William also has to agree to run any story he writes by them first, in exchange for them not telling him what he writes.

The next Totem is revealed to be at an MMA Festival in National City.

The next Totem is revealed to be necklace, worn by one of the fighters, which is made of the same wood as a tree under which the Buddha meditated to achieve oneness with Humanity.

Nxyly is able to activate the Humanity Totem easily, with a voice telling her to use the Totem wisely after asking her if she is of ready heart and she says that she is.

As Nxyly activates the Humanity Totem, a wave of energy washes over the people at the MMA Festival and they all start fighting.

It is noted that the people who are fighting are depraved, but not cold or unfeeling. They are also described as being gleeful and reveling in theft, destruction and violence. These stand opposite the power of Humanity, which is defined as equating to compassion and empathy. This leads Kara to guess that the Humanity Totem is the one Nxyly just got.

Martian Manhunter, Guardian and Sentinel are said to be fighting the crowds.

It is estimated that Nxyly could have drained the compassion and empathy from 10,000 people but only a few hundred seem to have been infected.

Esme made Kelly a friendship bracelet as a thank you for everything she did for her.

Andrea threatens to fire William after he refuses to write about what the Super Friends know about the weirdness in National City.

Lena's first attempt at casting her tracking spell leaves Nia unable to tell her right from her left. Lena guesses this effect will wear off after an hour.

Mitch detects the third Totem at the Hague in the Netherlands.

William talks with Lena about her spellbook and says that it reminds him of his father's recipes.  Like William, his father was a baker, and William realized he couldn't follow his father's recipes literally because the ingredients had to be chosen with care, like fresh-picked berries over store-bought. This leads Lena to the revelation that magic has to be approached in the same way.

Esme breathes fire when she and her mother are confronted by one of the berserker fighters. She seems surprised that she had this ability.

J'onn accidentally reveals that the Super Friends have access to spy satellites, which they are using to track Nxyly's ship.

Lena has to retrieve a sample of Sheep Laurel seeds from the Botanical Gardens.

The National City Botanical Gardens are close to the Arena.

Mitch determines that the third Totem (i.e. the Hope Totem) is a sculpture called The Hand of the Flower, which is on display in The Hague. He tells Nyxly how to get to it, but it will require killing one guard silently.

Nxyly finds herself unable to kill the guard, after she suddenly starts thinking about how sad his family and friends will be.

Kara feels Nxyly being overwhelmed by emotion and guesses what Mitch did about the Totem overwhelming her sense of empathy.

Kara suggests Lena keep casting her spell so they can overwhelm Nxyly. Lena refuses, saying she won't let Kara ever do something just because the ends justify the means.

Lena ultimately agrees to Kara's plan, but only if William will honestly report on what they are doing and why.

William agrees to keep Lena's involvement a secret, but insists on writing about Nxyly, the search for the Totems and the role of magic in all the craziness in National City.

The rest of the Super Friends keep the peace in the city, as Kara and Lena try to work the spell again and track down Nxyly.

Esme's foster mother locks her out of their home and tries to force her to fight the berserkers.

Esme is saved by Sentinel and Guardian.

Mitch takes Nxyly back to National City, where she deactivates the Humanity Totem and throws it out of their ship.

Kara recovers the Humanity Totem, but Nxyly and Mitch escape.

Dreamer suggests they use the particles Lena recovered to track the Dream Totem next.

Andrea is pleased by William's article, but demands he write about which Super Friend has magic powers. William refuses and threatens to go to the Daily Planet if Andrea keeps telling him how to do his job. She says fine, but moves him to the desk next to the bathrooms.

Lena and Kara get pot-stickers to celebrate.

The Fords give Esme up and Kelly and Alex both show up to escort Esme back to the group home. It is hinted, however, that the two are thinking of adopting her themselves.

Mitch and Nxyly begin plotting a new plan to get the Hope Totem from the Hague.

The Hague - The Netherlands

Brainiac-5 is off-camera trying to track Nxyly's ship for the entire episode.

Kara is running at less than peak efficiency through the episode and pushing Lena (who is also not at her best) to focus on using her magic.

Not the greatest episode of Supergirl, but far better than most of what has come in Season 6 thanks to a high-action quotient and some great dialogues between Kara and Lena.