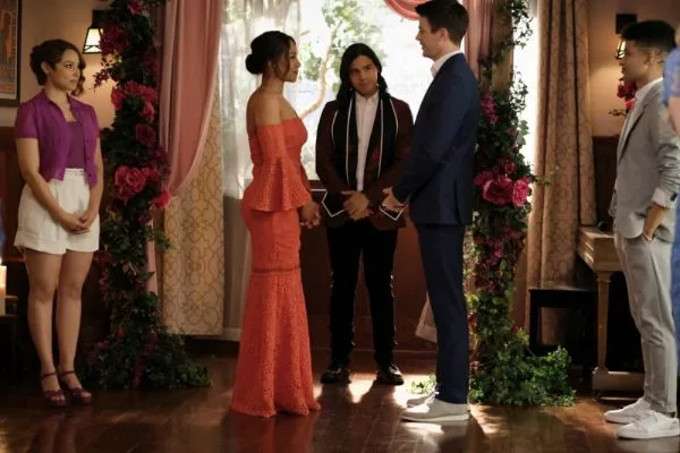 Three generations of speedsters join with allies old and new against the menace posed by Godspeed.

Star Wars (the lightning-blade flight) and The Flash comics of Mark Waid (creative use of Speed Force, family theme)

In the opening scene, Nora makes reference to her father being out somewhere doing something dangerous, when he's in a different lab being projected into Godspeed's head.

Karan Oberoi's performance as the amnesiac August Heart is very honest and heartfelt. Which makes it all the more painful he spends most of his time on-screen hamming it up and the idea of an Amnesiac man being traumatized by the idea of his becoming a villain is largely ignored by this episode.

Jordan Fisher is a great singer.

Ignoring how ridiculous some of it is, the special effects work for the various Speed Force effects is great.

This is the first season finale of The Flash to not end with a cliffhanger.

Speedsters who get their powers from an artificial source cannot match the pure potential of a true speedster chosen by the Speed Force.

Amnesia is a side-effect of a speedster fracturing themselves into multiple speed clones.

Godspeed cannot use his speed-draining powers on a Negative Speed Force user like Reverse-Flash.

Chester modified his father's design for the SEE so that it would only target artificial speed cell membranes, making it ineffective against natural metahumans.

Cisco modifies his Entropy Trap and uses it to create an Entropy Bubble that makes him and Frost invisible to the Godspeed clones. The one downside to it is that they have to hold their breath while they are inside it, as there's no oxygen in the field.

The Entropy Bubble runs on a two-minute timer.

Barry gives August Heart a speed boost to jumpstart the artificial speed cells in his body that have gone dormant. The harness Chester makes should help shape the change and create an organic Speed Force connection.

Jay: Kid? I know giving August Heart his powers back is crazy. But if we don’t, we’d better come up with another idea. A big one.
Barry: (grinning, have just had an idea) Not a big one. A fast one.

(Thawne just struck Godspeed with a near-fatal blow.)
Barry: You could have killed him.
Thawne: Wasn’t that the plan? Didn’t you say you needed help dealing with a threat? Well, I dealt with it. And now…(chuckling) and now… it’s just you and me, Flash. I’ve been waiting for this moment for a long, long time.
Barry: I’m only gonna say this once. Walk away while you still can.
Thawne: Allen. You are too weak to stop me. (voice distorting as his eyes glow red) And I’m just getting started!
(Thawne tries to punch Barry but, as we shift to Barry's perspective, he's moving much slower. Barry has enough time to grin as he grabs Thawne's hand and throws him, easily tossing him a few dozen feet.  When Thawne gets up he is furious... but that fury hides clear terror.)
Thawne: What did you do?! I created you. I taught you everything you know! Everything you are is because of me! What did you do?
Barry: (smiling innocently) I got faster. Didn’t you?
Thawne: No.  But I will, Flash. Mark my words. I will.
(Thawne runs. Away. Fast.)

Most of Karan Oberoi's lines as the true Godspeed, but especially "Are you threatening me, Flash?!" which is delivered in a manner that leads you to expect his next line will be "I am Cornholio!"

As the episode opens, Bart is still in a coma and Nora and Caitlin are watching over him.

Joe and Kramer are still stranded on the freeway, being attacked by Godspeeds.

Godspeed acknowledges this is the first time Barry has met him, suggesting that he may have met Barry at a later point in his timeline.

Godspeed demands Barry find a way to give him an organic Speed Force connection or he will destroy Central City.

The amnesiac August Heart has a tearful conversation with Cecile about being afraid of becoming the monster everyone helping him seems to be afraid of.

Chester checks in on Allegra, who is still depressed over Ultraviolet's death.

Chester reminds Allegra that she saved Barry's life in 716 and in doing so she probably saved the city, while Ultraviolet chose to start a war instead of ending one.

Nora West-Allen refers to the Speed Force as "Big Nora" and she calls her "Little Nora."

Jay comments on how the Speed Force resembles his wife, though he is very formal in addressing her.

Bart is able to recover from the coma in seconds thanks to the boost.

Bart addresses Jay as Uncle Jay, which surprises him but does not displease him.

Kramer briefly acquires superspeed and saves Joe's life, running them away from the Godspeeds, before passing out.

The assembled speedsters attack the Godspeeds, each using a signature move.

Bart throws stars made of lightning.

Nora uses a whip/lasso made of lightning.

Jay throws his hat like a discus and ricochets it off things before it returns to his hand.

The Speed Force just drains the energy from the Godspeeds and makes them pass out.

The Godspeeds are able to recharge almost instantly, thanks to the presence of the Speed Force.

Allegra teleports in with the SEE and supercharges it to 500% times its maximum strength. This disables all the Godspeeds present but also wrecks the SEE.

Chester says it will take him 4-5 weeks to rebuild the SEE.

Nora once again asks Barry and Iris to consider giving Godspeed but he wants but Barry still refuses.

Cisco is able to trick the Godspeed mob he and Frost are facing into leaving them alone using an Entropy Bubble.

With the help of the Speedsters reassembling parts, Chester says he can get the SEE fixed in a day.

Barry and Iris come up with a plan to deal with Godspeed once and for all and it involves giving him an organic Speed Force connection.

Iris and Big Nora travel into the Speed Force to enact part of the plan, with Iris acting as an anchor for Big Nora.

Barry tells Jay, Bart and Nora to stand down while he works the other part of the plan, which involves trying to give the amnesiac August Heart an organic Speed Force connection.

The newfound speed restores August Heart's memories, but he renounces his previous gentle personality to become the God of Speed he wants to be.

Bart is reluctant to hold back but is talked into it by Jay, who gives him the "sometimes you have to take off your hat speech" for the first time, from Jay's perspective.

Godspeed is stopped in his effort to kill Barry by Eobard Thawne, who was last seen in 615.

Big Nora apparently helped Thawne to rebuild his body in exchange for his help in defeating Godspeed.

Barry is now faster than Thawne and easily outclasses him when Thawne inevitably tries to double-cross him.

August Heart is said to be locked up in Iron Heights and Big Nora erased his memory of Barry Allen's secret identity.

Barry asks Iris to renew their vows with a proper ceremony, unlike their wedding, which was disrupted by a Nazi attack from Earth-X.

Kristen Kramer gets a metahuman gene test and determines that she has the power to copy the powers of other metahumans near her.

Kramer decides to take a leave of absence from the CCPD to get her head together, but she's changed her mind about depowering metahumans as a means of punishment.

Barry and Iris hold their vow-renewal ceremony on the following Tuesday. Cisco officiates the ceremony, wearing a STAR Labs sash to accent his vestments.

Cecile indicates to Joe that she might want to get married.

Bart sings as part of the ceremony.

Barry uses his Flashtime powers to make his and Iris' kiss last as long as possible.

Frost and Mecha Vibe fight a different group of Godspeeds at the same time that the Speedsters face the main group.

The Speed Force communes with the Negative Speed Force to reach Eobard Thawne and help him fashion a new body.

Somehow, nobody anticipates that the Godspeed clones, who are feeding on the Speed Force, might somehow draw power from Nora/Big Nora/Speed Force Nana being present.

Much like Season 7 itself, this is a few great moments held together by a lot of weak subplots. The only thing keeping this show running at this point is the ensemble, but even Grant Gustin's ability to deliver a stirring speech is tested here. Here's hoping the show rebounds in Season 8, like Arrow did.
Posted by Starman at 3:26 PM