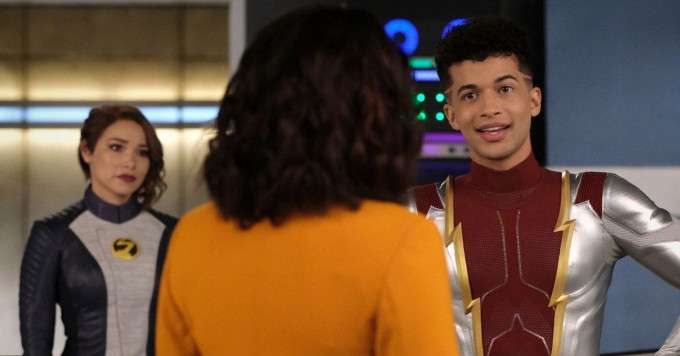 The Godspeed War intensifies, threatening Central City, as Barry and Iris meet a new addition to the family - their future son, Bart!

Why didn't Joan and Jay let the rest of Team Flash know they were alive before now? (Maybe they wanted to make sure they weren't going to die like all the other doppelgangers.)

This was the 150th episode of The Flash.

The opening shot of Central City in 2049 showed the billboards for several businesses from the comics, including Ferris Air, Palmer Technologies and the Central City Sharks football franchise. The skyscraper for Iris' newspaper, now CC Citizen Media, is also visible.

While not referred to by the code name Impulse, Bart West-Allen is clearly based upon the comic book character Impulse. His name was also Bart Allen, but he was Barry Allen's grandson rather than his son. The Arrowverse Bart's costume is modeled on his comic book counterpart, however, and he makes use of the slang term "Crash" to mean something is good, like the Bart in the comics. The Arrowverse Bart is also reputedly described as impulsive.

The building where Bart and Nora stop after their first fight with Godspeed is Powers Industries. In the Batman Beyond animated series, Powers Industries was the company that acquired Wayne Enterprises in a hostile takeover. It's CEO, Derek Powers, was the chief villain of the first season and, in secret, the supervillain Blight.

Adam Creyke is said to have confessed to a bombing in Polokistan. This is a fictional DC Comics country, once part of the Soviet Union, which became protected by a villain called General Zod, who was unrelated to the classic Kryptonian General Zod.

Based on the timeline described in the episode, Jay Garrick would have been 94 when he was killed by Godspeed in the future. It might seem unlikely he'd still be active at that point, but in the original comics Jay's connection to the Speed Force slowed his aging so he still appeared to be middle-aged when he was 100 in some stories.

Jay Garrick his held captive in the Zauriel Cathedrial on Morrison Avenue. This is a nod to Zauriel - an angel who became a superhero during writer Grant Morrison's run on JLA.

Nora has developed the ability to shape her lightning into a lasso that she can use to snare other people.

According to Nora, speedsters should not try to phase through other speedsters, as their molecules can become conjoined on a quantum level. However, Bart is able to effectively disable Godspeed by doing this.

According to Bart, quantum physics is not taught until the junior year of collegiate science classes.

Nora says that Future Chester improved the efficiency of her gauntlet by 200%.

The Solar Encryption Engine (SEE) is a device Chester's father created that reconverts the atomic mass of neutrino-voltaic energy cells. This allows it to neutralize artificially created kinetic energy sources, like the artificial speed Godspeed uses. However, it must be charged with an electromagnetic source - preferably microwave energy.

Bart and Nora have a combo move they can do together called the Fathwoom Boom.

Bart is said to have the power to throw lightning in the shape of stars but can't catch a ball of lightning in 20 seconds.

According to Chester, the SEE required 700 nanometers of microwave energy to be powered up. When Barry charged it with the Speed Force, it acquired 5 billion nanometers, which was channeled directly into the Godspeed variants instead.

Bart is able to vibrate so quickly he can be invisible to the naked eye and uses this power to eavesdrop on the conversations at STAR Labs.

Chester analyzes Allegera's energy output and determines she is only projecting ultraviolet light rather than microwaves, as per usual. He claims that Allegra only hits that range when she's channeling from negative emotions, like anger or pain.

Cisco creates a synthetic entropy trap with his gloves, but it is only good for one shot against Godspeed.

(Nora and Bart are working out.)
Nora: What gives, Bart? You can throw stars with your lightning, but you can't catch a ball of it in under seconds?
Bart: Nora... (breathing heavily) It's a lot harder than it looks.
Nora: Well, maybe you should stop focusing on being a badass parkouring off every wall you see.
Bart: So you agree I do look badass?

Bart: Dad and Uncle Wally taught me how to run, and how to meditate, and all that's great. Uncle Jay understood me. He was the first person that saw my impulsiveness as a strength and not as a weakness, and he would literally tell me. He'd say, "Bart, sometimes you have to take a risk. "Sometimes you have to go with your gut... and is it impulsive? Maybe. But sometimes it's right." He got me... (sighs) And now he's gone.

(Barry, Nora and Jay are surrounded by Godspeeds. Suddenly, the church doors open. It is Cisco.)
Cisco: I leave Central City for two seconds...

In the future of 2049, Nora and Bart West-Allen are the protectors of Central City. They work with the Central City Police and a Gideon AI.

The address of the Flash Museum (and, presumably STAR Labs in the modern day) is given as 5724 Fontana Drive.

Chester apparently meets Nora and Bart in the future. Nora says he's the smartest person they know and Bart claims that Chester helps him with his differentials of mathematics homework. However, it seems likely Bart is lying and is hoping to trick past Chester into helping him in the future.

West-Allen Family Rule #1 is Protect the timeline at any and all cost.

Nora and Bart want to return to their time, but Barry invites them to stay a while since the Godspeeds are stopping anyone from traveling to 2049.

Caitlin and Cecile are working on a new version of the Cerebral Inhibitor (aka MAD 2.0) to unlock August Heart's memories, but haven't had any luck so far.

Chester found a device in his father's notes he think he can use to depower the Godspeed variants, but he needs Allegra to help him charge it.

No one has seen Allegra since yesterday, when she went to find her cousin.

Iris and Barry told their children about the first version of Nora they encountered in Season 5.

When Barry, Nora and Bart confront the Godspeeds, Barry is stunned when Bart says they can kill each other for all he cares.

All the Godspeeds chase after Bart and nearly kill him, referring to him as "The Adversary."

Bart eventually explains that August Heart is his Eobard Thawne and that he's devoted to killing him, for some unknown reason.

Chester finds Allegra in the lounge and catches her up on things. He senses something is wrong, but Allegra denies it. Chester also notes that Allegra's coffee is ice cold, despite her claiming she warmed it up with her powers.

Adam Kreyke is handed over to the FBI in Midway City.

Neither Joe nor Kramer report how Adam Kreyke claimed to have seen Kristen Kramer die.

Joe and Kramer are given a car to take them back to Central City.

Neither of them is able to contact anyone in Central City on their phones.

Gideon makes contact with Bhikkhuni Amala - the Buddhist nun who helped Wally hone his powers, whom he mentioned in 614  She says that Wally is in deep meditation, handling unrest on the psychic plane. This explains why Wally does not join the Godspeed War. (It is possible, however, this unrest is connected to the Godspeeds draining the Speed Force from the inside.)

Iris is returned to the present, having apparently been stabilized by Deon Owens.

Iris was able to watch everything that was happening on Earth from within the Still Force.

Iris asks what Godspeed must have done to Bart to make him equate him to the Reverse Flash.

Jay Garrick and Dr. Joan Williams are revealed to be alive and living in Keystone City on Earth-Prime. This marks their first appearance since 602.

Jay's speed has been restored with the activation of the Artificial Speed Force, which Joan says happened 40 days earlier.  He also no longer needs a cane to walk.

Jay is ambushed by six Godspeed clones before he can run to join the fight.

Deon Owens apparently talks to Nora and Bart in the future and told them about saving their mother at one point.

Barry tells Bart he wants him to sit this fight out so Godspeed isn't provoked. This makes Bart run off.

Bart goes to Joe's house, which was apparently where he always went to get away from things when he was uspet.

It is revealed that Godspeed kills Jay Garrick in the future and that is why Bart hates him so much - because Jay was Bart's mentor and the only one of his teachers he felt truly understood him and worked to turn his impulsive nature into a strength.

Wally West goes on to teach Nora and Bart, in addition to Barry and Jay.

Nora gets Bart to agree to sit out the fight with Godspeed.

Caitlin and Cecile show August Heart the Cosmic Treadmill to see if it stirs his memories. It does not.

Despite Allegra claiming to have been trying to use her powers to charge the SEE for a while, it is only 7% charged when Chester calculated it should be at least 89% charged that that point.

Barry uses his lightning to charge the SEE, since it can absorb any form of kinetic energy, in theory. Unfortunately, this only serves to recharge the Godspeeds rather than drain their power.

Frost is able to save Barry and Nora from the Godspeeds.

Barry and Iris tell Nora to stay out of the fight with Godspeed as well as Bart.

Barry recalls how Godspeed was originally Nora 1.0's arch-enemy, as seen in 518.

The Rebel Godspeed faction is revealed to have kidnapped Jay Garrick and they contact STAR Labs demanding a trade; Jay for Bart.

Bart runs off to save Jay.

Nora and Barry come to save Bart, but they are all quickly surrounded by Godspeeds.

The Godspeeds are frozen by Cisco Ramon, who arrives in his Mecha-Vibe costume, armed with a make-shift entropy trap that allows the heroes to escape.

Bart is left in a comatose state by the Godspeeds attack.

Cisco says he decided to come help after John Diggle told him what was going on.

Joe and Kramer return to Central City to find people clogging the freeways out of town.  They are attacked by Godspeed clones.

The episode ends with Barry confronting the real Godspeed inside August Heart's mind.

One of the stronger episodes of the season, but that's largely because all the extraneous subplots are all but over and not much time is devoted to them. Still, Nora's return is welcome and Bart is immediately likeable, which makes up for the fact that not much really happens in this episode when you get right down to it.
Posted by Starman at 5:50 PM