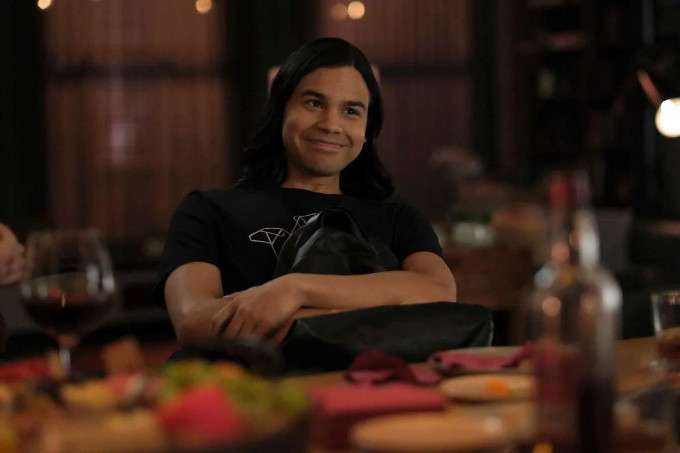 Cisco and Kamilla announce their plans to leave Central City, but before Vibe can retire he must join with the original Team Flash one last time to face an new version of the Rainbow Raider.

The Flash comics of Cary Bates. The general tone mimics the more light-hearted tone of The Flash Season 1.

Caitlin says the new Rainbow Raider's powers should wear off after 24 hours, although it hasn't been a day since her first known attack.

How the heck does Iris schedule multiple photographer interviews on less than a day's notice?

Despite it being a major plot point, modern blimps do not use hydrogen and it's hard to believe that any modern blimp, particularly a cutting-edge stealth model, would use it, after the Hindenburg Disaster.

The wrap-up of the episode is completely unbelievable. It's improbable that the same DA's office that was ready to forcibly remove Frost's powers to make a point about dangerous metahuman criminals mere days before this episode occurred would be willing to allow a telepathic robber to work in the mayor's office in lieu of jail time - particularly since Kristen Kramer is still in town and looking for an excuse to use her new anti-meta weapons.

It's also a bit odd that Carrie Bates didn't face criminal charges for erasing medical debts illegally, given that she was fired six times in three months for doing that. (Presumably she used her powers to get off with merely being fired, and then persuaded five other agencies that her record was a mistake?)

The script hits all the right notes in looking back at Vibe's career and giving him a proper send-off.

Cisco mentions an obscure agency called CEMA - Cosmic Emergency Management Agency - which nobody else has ever heard of. This is an incredibly deep cut reference to Green Lantern Vol. 3 #166, which marks the first and only appearance of CEMA in the DC Comics universe. Similar to FEMA, the group delivers aid to refugees following disasters such as giant monsters eating planets.

When Chester is going through Cisco's things, he finds a box of T-shirts and holds up one with a melting Rubix's Cube. This was the shirt Cisco wore in his first Arrowverse appearance in A219.

The photo of Barry, Cisco, Caitlin and Thawne Wells that Cisco looks at was taken during 111.

This episode introduces a new female Rainbow Raider whose real name is Carrie Bates. This is a nod to writer Cary Bates, who co-created the original Rainbow Raider.

The new Rainbow Raider is somewhat closer to the original concept from the comics than the Arrowverse version of Roy G. Bivolo. While her powers are based around one emotion (happiness rather than anger), she can also generate blasts of rainbow-colored light. However, she cannot fly or form constructs from this light.

Caitlin determines that Stanley Ellis had huge levels of dopamine and serotonin in his system, indicating that the new Rainbow Raider can control the cingulate cortexes of other people. This allows her to force people to feel euphoric and susceptible to suggestion.

Caitlin theorizes that Roy's powers made use of one color of the spectrum - red, but the new Rainbow Raider uses the whole rainbow, making her powers much stronger than those of Roy G. Bivolo. This is why Cisco's revised light grid failed to work - it became overloaded.

Cisco says he had to upgrade the goggles for his costume because the convex filtration coating wore off over time.

Rainbow Raider 2.0 plots to steal a stealth dirgible with auto-navigation and a two-ton payload. It can hide itself from satellite detection.

(Cisco has been caught in Rainbow Raider's light show and is loving everything. He forcibly hugs The Flash.)
Cisco: Dude, I am so happy to have you in my life!
The Flash: Okay, this is happening. On a very public street.

(Cisco has just given Chester all of his blueprints and control of his workshop.)
Cisco: Oh, I know that look. You're gonna bail on me so you can spend all night organizing your stuff in that space, aren't you?
Chester: Uh-huh. But I promise I'll be there tomorrow morning at the epic goodbye breakfast at Jitters.
Cisco:  I know you will.
Chester: Thanks for showing me the ropes, man.
Cisco:  Keep 'em safe for me, will you?
Chester: Roger that.

Cisco calls a STAR Labs staff meeting at 9 AM on a Saturday to tell everyone he is quitting.

Cisco says that he's taking a job with ARGUS at the Star City office, where he will be the new Director of Science and Technology.

Cisco says that the previous director, Chip Cooper, has been reassigned to CEMA - The Cosmic Emergency Management Agency.

Cisco was also recommended for the job by both Lyla Michaels and John Diggle.

Cisco shows Chester the STARchives and starts clearing some of his personal belongings out of it. As they are going through it, they find the Cosmic Treadmill, the helmet Barry wore when first testing his powers, the Speed Force bazooka, the back-up Captain Cold gun, the Thinker's chair, the Samuraoid, and Cisco's T-shirt collection.

Cisco notes that apart from Chester, everyone seems to be taking his leaving really well so far.

Cisco discovers that Barry already packed all his belongings at super-speed.

Caitlin says she's fine with Cisco leaving when he asks her how she is feeling.

Frost is apparently at her mother's lab. She sends Cisco a message regarding his leaving; "You suck forever, but I love you anyway."

A woman in a rainbow jacket robs a bank by using a metahuman power to make the cashier, Stanley Ellis, happy and agreeable, leading to him giving her a cashier's check for $10 million. She is later dubbed the Rainbow Raider 2.0.

Caitlin determines that the new thief is a meta based on a high level of dark matter in the immediate area around the bank.

Kamilla, Iris and Allegra cover the bank robbery scene together.

While going through her photos, Kamila notices that Cecile Horton was at the crime scene at one point.

Allegra interviews a Detective Finn, whom she apparently recognizes.

Cisco pulls out his Who's Who of Metah

Cisco dubs the new thief Rainbow Raider 2.0, based on Stanley Ellis' brain showing the same signs of manipulation as the victims of the original Rainbow Raider, Roy G. Bivolo - only happy, instead of angry.

Cisco says he can adapt the prismatic light grid he built to reverse the effects of the first Rainbow Raider's powers in 108.

Barry says Cisco should take his designs with him to ARGUS.

The new Rainbow Raider catches Barry and Cisco off-guard by unleashing her powers with a prismatic energy blast rather than just making eye-contact. Barry is forced to let her escape after she zaps a valet and he suddenly gets the urge to take one of the cars in his care for a spin.

Cisco was also caught in the blast and is left feeling very happy.

Barry has Chester babysit Cisco while he and Caitlin work on tracking down Rainbow Raider 2.0.

Iris isn't happy with any of the replacement photographers

Kamilla recommends a photographer named Kenji, but Iris dismisses her as too inexperienced and not having done much besides cover local politics and football games.
Cisco becomes convinced Chester is trying to keep him distracted because everyone else is preparing a surprise party for him.

Barry runs off to confront Bates, but is distracted by Cisco's latest enhancement to his costume: a HUD which displays neon kittens shooting lasers from their eyes. This causes Bates to use her whammy on Barry, letting her escape after telling him that she's on a mission.

Barry and Cisco start having a dance party in the comms room.

Barry learned how to breakdance by speed-watching break-dancing videos on-line.

Chester is able to reverse the effect of Bates' powers with a modified camera.

Cisco determines that Bates was trying to steal an experimental stealth blimp.

Cisco gets upset when Barry suggests going to ARGUS and seeing of they have anything that can detect a stealth blimp.

Caitlin and Barry say they were just putting on a brave face because they were afraid they'd ruin Cisco's happiness over his new job if they made a big deal about not wanting him to go.

Cisco tells everyone his worst fear from 710 - still being at STAR Labs in 30 years when everyone else has moved on.

Bates was fired six times in three months from six different agencies, after cancelling the huge medical debts of various clients she was meant to be getting money from. This leads Barry to believe she's planning to give away everything she stole by making it rain riches out of the blimp during a major football game.

The Gotham Goliaths are playing the Central City Sharks.

Rather than using an electric power source to counter Bates' powers, Barry and Cisco use Allegra's powers to break up her light waves.

Allegra uses one of Nash Wells' teleporting clouds to get them onto the blimp, since Barry's lightning could risk causing the blimp to explode.

Barry is able to put power-dampening cuffs on Bates after her first blast.

Barry gets Bates to surrender after saying he will vouch for her and get her a job working with the mayor's economic development committee in lieu of a jail sentence.

Barry phases himself, Allegra and Bates out of the blimp while Cisco stays behind to manually stear it away from the stadium after the auto-pilot is fried.

The DA approves of The Flash's plan to let Carrie Bates work for the mayor's office.

The Sharks apparently beat the Goliaths.

CCPN is reporting that Rainbow Raider's crime spree inspired a wave of charitable donations after the reasons for her crimes were revealed.

Chester says the rest of the team is throwing a surprise party for him at the loft.

Cisco gives Chester a flash drive holding all his designs from the last six years.

Chester says he's going to skip the party to look at everything and prepare his new workshop.

Iris and Allegra throw a going away party at the Citizen offices for Kamilla.

Cecile shows up for the party, and when questioned about being at the crime scene, says she was meeting an old contact regarding a case.

Caitlin, Joe, Barry and Cisco have a karaoke party at Barry's place. The first song of the night is Lady Gaga's "Pokerface," which was the song Cisco used to wake Barry from his coma.

In the final scene, Cecile returns home to hear a voice talking to her and to see a masked woman in her reflection saying that she will find her.

Cisco locked himself inside STAR Labs cryo-vault on his first day at work.

Illogical and idiotic at times, but it's still probably the best episode of Season 7 so far by sheer virtue of being funny and fun in equal measure.
Posted by Starman at 9:51 PM