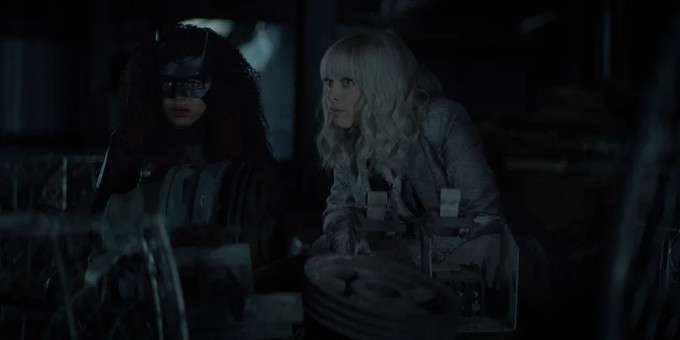 Ryan is faced with a difficult decision that could expose her as Batwoman, creating a rift in the Bat Team. This leads to an unlikely alliance with Alice, who has her own score to settle with Black Mask. Meanwhile, Black Mask's plans for Kate Kane begin to unfold, as Sophie tries to decide where her loyalties truly lie.

Every Batman story where Batman forms a reluctant alliance with a villain in the name of the greater good, particularly the Halrequinade episode of Batman: The Animated Series. (Alice and Ryan have a similar scene where Alice starts playing with buttons in the Batmobile.)

Javica Leslie and Rachel Skarsten have great chemistry and the best parts of the episode center around them bantering with one another.

The script is witty, with some great dialogues.

Black Mask makes reference to a Sionis family tradition of every family member having a replica mask made to decorate their casket. This is a nod to the comics, where Black Mask made his mask from the black wood of his father's coffin.

Mary's clinic is revealed to be located on Park Row in Gotham City. This is the same street where Thomas and Martha Wayne dies. In the comics, the once nice Park Row neighborhood deteriorated afterward and became known as Crime Alley by the time Bruce Wayne was an adult.

While using her night vision, Batwoman's coordinates were shown as being 42° 5' 23" N, -75° 6' 13" E, placing Gotham in the real-world location of Delaware County, New York, on the north of the Pepacton Reservoir. This is, it should be noted, far and away from where Cisco Ramon's map of Post-Crisis Earth showed Gotham City to be located (i.e. near Chicago, Illinois.)

Enigma tells Black Mask that while she has repressed Kate Kane to turn her into Circe Sionis, psychologically and behaviorally, she could do nothing to alter her voice. This was due to larynx damage during her kidnapping and subsequent torture.

Luke determines that Black Mask kept tabs on his drug labs with video feeds. This allows him to track the IP address of the cameras to get the location of the lab where Angelique was being held.

Luke has Mary deliver a targeted kill drive to Sophie - a device that, when introduced to the Crows' computer system, will scramble the data of the Batwoman blood test results.

Black Mask: Masks have taken on various meanings over time. Deceit. Disguise. Cheap entertainment. But as Jung once said, we all wear masks, both to create an impression upon others but also to hide our own true natures.

Sophie: I thought you should know the Crows are in the process of extracting your DNA profile from blood spatter found at the Snakebite facility. Once they have that, they're gonna upload it to the national DNA registry. Of course, they'll need something to match it against, so you should be good unless of course you've ever been in the system. Anything you want to tell me?
Batwoman: Other than you need to destroy that sample?
Sophie: It's already being processed. They'll have the profile in a few hours. Arrest warrant won't be long after that.
Batwoman: I better use what time I have left to save the one person who had the guts to testify against Black Mask. Remember her? The one the Crows were supposed to protect?

(Batwoman enters the False Face drug lab. She finds several dead men, burned, and Alice in the middle of torturing another one.)
Batwoman: What the hell is this, barbeque for one?
Alice: Batty, what brings you here? Oh. Was it the odor? Honestly, I've been at this so long I can hardly smell it.
Batwoman: Why are you here?
Alice: The False Face kidnapped a friend, so I've been popping by their known hideouts, seeing if someone would be willing to spill his possible location.
Batwoman: I'm looking for someone they kidnapped, too.
Alice: Really? Her name wouldn't happen to be... pbb... I don't know... Angelique by chance?
Batwoman: How do you know that?
Alice: Well, according to Mr. Extra Crispy over here, when Angelique couldn't conjure up the special sauce that gives Snakebite its bite, Black Mask took her phone and used it to track down the actual chef, who does know all herbs and spices.
Batwoman: You're talking about Ocean.
Alice: Mm-hmm.
Batwoman: I thought you killed him.
Alice: Heh. Well, that's completely besides the point.
Batwoman: Which is?
Alice: Angelique and Ocean are apparently being held at a place that is more fortified than this one, and quite frankly, I need backup, by which I mean someone to stand behind so that the bullets don't hit my visage.
Batwoman: Damn. You're crazier than everyone already thinks.
Alice: Well, enemy of my enemy, doesn't that mean...
Batwoman: That you're still the bitch who murdered my mom.
Alice: Touché. But I'm also the bitch who knows where our beloved cooks are.

(Batwoman and Alice are sitting in the Batmobile, observing a distant watchman.)
Batwoman: Okay. You draw him out, I'll take him out. Think you can handle that?
Alice: Sure.
(Alice reaches over and starts honking the horn of the Batmobile.)
Batwoman: What the hell are you doing?
Alice:What you asked.

Alice: If they were harmed in any way, I swear to you on my headless mother's grave...

(Alice has just finished knocking out a guard.)
Batwoman: Oh, my God. You love him.
Alice: I just kicked him for no reason.
Batwoman: Not him. Ocean.
Alice: Ocean? What? N-No.
Batwoman: Is that your boyfriend?
Alice: I drove a knife through his heart.
Batwoman: Well, for you, that's not a no.
Alice: Oh. That's true.

Alice: Just a little piece of advice from an antihero to a hero. You can't save everyone. Not without losing who you are.

(Alice is being strangled by the masked Kate Kane.)
Alice: Help me!
Batwoman: Good luck with that.
(Batwoman turns around to leave.)
Alice: (desperately) I remember your mom. Cora. I remember her. Short hair, purple sweater. I lied about forgetting her. Now help me... please.
Batwoman: Like you said, can't save everyone.
(Batwoman turns around again and leaves Alice for dead.)

With the aid of Enigma, Black Mask hypnotizes Kate Kane to believe that she is his daughter, Circe Sionis.

Black Mask gives Kate a mask based on his daughter's face, which had been buried with her.

Circe Sionis was apparently an inmate at Arkham Asylum.

Alice wakes up in bed with Ocean and tries to sneak out before he wake up.

As Alice is making her escape, she runs into three members of the False Face Society. They taser her and she blacks out as they are beating up Ocean.

Sophie learns about the sample of Batwoman's blood which Agent Tavaroff found in 211. She also learns that he's been authorized, by Commander Kane himself, to run a full analysis comparing it to the national DNA registry.

Sophie tries to talk to Jacob about focusing so many of the Crows' resources on Batwoman, but he refuses to talk to her, being high on Snakebite.

Luke is able to determine the location of the False Face drug lab where Angelique was being held.

Sophie lights the Bat-signal to warn Batwoman that the Crows have her blood.

Sophie does not tell Batwoman that she knows who she is now.

Ryan is not scared and says she'll use what time she has left to catch Black Mask.

Sophie says she will do what she can to destroy the sample.

Luke is in favor of dropping Angelique's rescue to focus on recovering the blood sample. Ryan tells him to help Sophie if he thinks it's that important.

Ryan discovers Alive in the middle of torturing the False Face gang members in the lab when she gets there.

Alice tells Ryan about Ocean's kidnapping and guesses that she's there looking for Angelique.

Alice suggests they team up since Angelique was apparently taken to the same place as Ocean. Ryan reluctantly agrees.

Sophie tries to sneak into the lab with the Batwoman blood sample, but finds another agent is sitting with it and watching it as it finishes compiling.

Mary delivers a targeted kill drive to Sophie that she can use to destroy the blood test results. She also offers to act as a distraction, so that Sophie can gain access to Jacob Kane's computer to use it.

Sophie figures out that Mary works with Batwoman as well.

Ryan handcuffs Alice outside the drug lab once they take care of all the guards on the outside.

Sophie finds out they are uploading multiple investigations to the DNA database at the same time as the Batwoman sample. This leaves her unable to use the kill drive, as it will also destroy all those records.

Mary's clinic is revealed to be located at 8845 Park Row.

Mary has changed her mind about making her clinic legitimate and shows Jacob what she has done to bring it up to code. This includes proper storage, certified nurses and doctors and Mary limiting her aid to doing the paperwork.

Mary notices that Jacob is sweating and seems anxious to leave.

Jacob notices that Mary's fax machine, the official means of notifying the police of suspicious patients (such as anyone with a bullet wound) is unplugged. He shrugs this off, however, saying that he can live with the compromise if it means Mary is talking to him again.

Sophie is able to destroy the record with Batwoman's identity before Agent Tavaroff can open it.

While covering her tracks in Jacob's office, Sophie finds his Snakebite kit.

Once Ocean and Angelique are done making the Snakebite, the False Face member filming them gets ready to kill them. He shoots Ocean before Batwoman steps in to save them.

Ocean had apparently been talking non-stop about Alice ever since being captured.

Angelique helps Ocean to escape as Batwoman goes back for Alice.

Batwoman runs into "Circe" and the two fight.

Alice joins the fight, having freed herself, but is overpowered by "Circe".

Ryan abandons Alice, leaving her to the mercy of "Circe".

"Circe" seems to freeze up while looking at Alice, seeming to remember her somehow.

Mary talks about Jacob signing off on her compromise, which Sophie says seems out of character.

Sophie shows the Snakebite kit to Mary and says she thinks Jacob is using the drug.

Mary refuses to believe Jacob is an addict.

Angelique goes to Ryan and thanks her for all she did to save her.

Angelique says she's worked out a deal with the Feds and is going into Witness Protection. She wants Ryan to come with her.

Ryan refuses, saying she's not ready to give up on making Gotham a better place so kids don't suffer like they did.

Kate took Alice alive and took her to the Sionis home. Black Mask is ready to kill her, but suddenly changes his mind, saying there is one way she might be helpful.

A solid episode which establishes the depths of Black Mask's evil while giving us some great moments with Alice and Ryan playing off of each other.