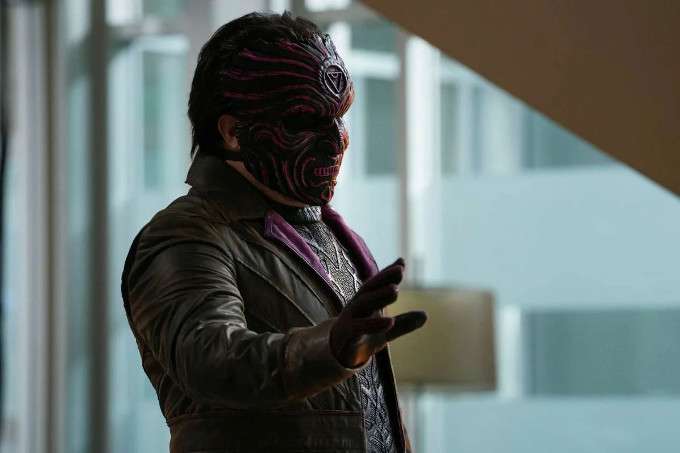 When a powerful new villain with psychic powers uses his abilities to amplify the fears of Central City's citizens, Barry must overcome his own worst fears, with Cecile's help, to save the day. Meanwhile, as Joe finds himself escorting a VIP from the Governor's office and Iris begins investigating why they're in Central City, Frost and Caitlin debate whether or not they should try and lives in separate bodies after being separated.

The Flash comics of Joshua Williamson (characters of Psych and Kristen Kramer) and the Nightmare on Elm Street movies (general horror aesthetic of dream sequences, idea of villain who attacks people with nightmares.)

Danielle Panabaker has a fantastic double turn here as Caitlin and Frost.

The episode does a fair job of establishing the dream-like, horror movie look of the Nightmare on Elm Street movies in the nightmare scenes.

The episode introduces Kristen Kramer as a member of the Governor’s Municipal Logistics Commission. In The Flash comics, Kristen Kramer was the name of a CSI who was assigned to work with Barry Allen in the lab at Iron Height's penitentiary after Barry was demoted following repeated absences from work, due to his work as The Flash. She first appeared in The Flash Vol. 5 #1 in August 2016.

The Arrowverse version of Kristen Kramer is completely different, being a career soldier with a file with the Department of Defense that is largely redacted. Her true purpose in coming to Central City is reportedly to arrest Frost.

Cisco gives the super-strong being who attacked Barry the name Fuerza, after the Spanish word for strength. In the comics, Fuerza.was the code name adopted by Alexa Antigone; a vigilante with super-strength and gravity manipulation powers, who first appeared in The Flash Vol 5 #59 (January, 2019). In the comics, Fuerza was an avatar of the Strength Force in the same way that Barry Allen tapped the Speed Force, who used her powers to battle the corrupt police of the island nation of Corto Maltese.

The Arrowverse version of Fuerza seems to be less-intelligent than her comic book counterpart, being a lumbering rage-driven monster whom Cisco compares to the Marvel Comics character She-Hulk.

The episode also introduces a new villain called Psych, who amplifies the fears of people around him.

In the comics, Psyche first appeared in The Flash Vol 5 #61 (March, 2019). Empowered by the Sage Force in the same way The Flash drew power from the Speed Force, Psych possessed a number of psychic powers, including telepathy and telekinesis. Psych primarily worked as an information broker, learning people's darkest secrets and blackmailing them. The Arrowverse version, by contrast, seems only to be interested in spreading chaos.

Barry uses a spectrograph to isolate a rare geothermic isotope that can be used to track the super-strong being that attacked him and killed Abra Kadabra.

Cisco theorizes that Frost and Caitlin's separation was caused by the reflective mirror chip in Mirror Mistress' gauntlet. When Frost was blasted with the gauntlet, her cryogenes rapidly replicated a whole new body so that she could survive.

Barry says that the residual geothermic isotopes on the Speed Force indicate that she was attacked by Fuerza.

Cisco says that Psych's telepathic powers are strong enough to inspire extreme psychosomatic reactions that can literally trick a person's body into hurting itself.

Frost tries to repair the Firestorm Matrix by connecting the transmitter to the output circuit.

After the third battle with Psych, Barry's frontal cortex begins healing, but the part of the brain that controls motor control is still weakened.

The Flash: So let me get this straight. You made those guards hallucinate some kind of Godzilla rip-off that almost squashed them?
Psych: Well, I suppose that is an accurate, if not immensely reductive assessment of the situation. So, yes. I scared the hell out of them. And that was after showing them a vision of a dozen bystanders getting eaten alive by a very hungry kaiju. It’s horrifying when you think it’s your turn.
The Flash: Okay, um, look. Whoever you are, I really don’t have time for this.
Psych: My, my. How rude. And from a superhero? Is that actually allowed?
The Flash: (sighs) Okay, I apologize for the rudeness. But I hope you enjoy Iron Heights. ‘Cause I really do have bigger problems today.
Psych: Not yet, but you’re about to.

Caitlin: Do you want to tell me what scared you so much when Psych whammied you?
(Frost looks pensive.)
Caitlin: Come on. We used to share a brain. I know you don’t scare easy.
Frost: I was under arrest, for all the crimes I committed as Killer Frost. And you were the one who turned me in.
Caitlin: I would never do that.
Frost: I know. (sighs) Look, ever since you let me take the wheel, I got to live my life, not just half the time, but all the time. And I really liked it! And I don’t want to go back to living my life just half the time. And I was afraid you’d hate me for saying that.
Caitlin: I would never hate you. You’re my sister. You can always tell me how you feel.
Frost: I don’t know how! I mean… I may be the strong one, but... you’re the brave one. I mean, you’re fearless! I mean, ever since I got in touch with my feelings, I just… I’m scared, all the time. Sometimes I don’t even know why.
Caitlin: You think you’re the only one who gets scared sometimes? Ever since we separated, there’s been this deafening silence inside my head, where you used to be. And it terrifies me! That’s why I’ve been so desperate to put us back together. Why I got so upset when you broke the Matrix. It’s ’cause my biggest fear in life is living without you.
Frost: Mine too.
Caitlin: Well, why don’t we face that fear together?
Frost: You mean…
Caitlin: Maybe two Snows really is better than one. My apartment has an extra bedroom. I could use a roommate. What do you say?
Frost: I say… “This Is Us.”
(Caitlin laughs and Frost smiles softly as the two hug.)

(Cecile has been strapped into The Thinker's chair.)
Cisco: Cecile, you good?
Cecile: Nope! Not even close to good. I… I am sitting in a death machine! What if this thing fries my brain? Wh… what if this chair turns me evil like the Top? What about that?
Caitlin: As a medical professional, I promise you will be okay. (pauses) Probably.

Ralph is still overseas with Sue, according to Barry.

Frost had a bet with Cisco that Barry and Iris would freak out over her and Caitlin's seperation. Cisco lost.

Cecile has a waking nightmare about someone stalking her. She later describes it as being more like a vision.

Frost and Caitlin can no longer hear each other's thoughts now that they are in separate bodies.

Frost still has her ice powers and Caitlin retained all her medical knowledge.

Caitlin is anxious to find a way to remerge with Frost, but Frost says they should focus on the berserker who nearly killed Barry.

The Speed Force, in the form of Barry's mother, manifests inside STAR Labs and asks for help before passing out.

The Speed Force has manifested as Nora Allen since HR Wells' funeral in 323.

Barry 's powers do not seem to be affected by the Speed Force's weakened state.

Barry puts his Speed Force Gauge on the Speed Force to monitor her power levels. She's currently in the red.

Iris investigates a story about how CC Mercantile was robbed when the guard fell asleep on duty. The guard later told her that he had a nightmare about his abusive stepfather stalking him.

Joe notices the robbery occurred at 11:09 pm. - the same time Cecile had a nightmare about someone stalking her. This leads him to suggest there's a new metahuman criminal with a Freddie Krueger gimmick.

Joe has his first official meeting with Kristen Kramer; a representative of the Governor's Municipal Logistics Commission.

Kristen Kramer seems to recognize Iris and claims to have read her story about disappearing into the Mirrorverse.

Iris becomes suspicious because Kristen Kramer uses the phrase "if you're not early, you're late." The only other time Iris heard this saying was from her military advisor at the Central City Citizen.

Cisco and Caitlin rework the Firestorm Matrix to help merge Caitlin and Frost together again.

Caitlin is a big fan of the show This is Us. Frost is not.

Cecile comes to STAR Labs to ask Caitlin for a check-up, thinking her nightmare could be a side-effect of her expanding powers.

Cecile has another nightmare vision and she senses that an armored truck is being robbed. Cisco later detects another geothermic isotope reading from the same location.

The masked robber, whom Cisco names Psych, causes Barry to hallucinate that he's fighting the Reverse Flash and Savitar and that he's impaled through the chest. This causes Barry to actually start bleeding as if he had really been stabbed.

Psych carries traces of the same isotopes linked to Fueza.

Cisco tries to repurpose the mental inhibitors used to fight Gorilla Grodd, but they prove less than effective given Psych's immense power level.

Iris pulls Kristen Kramer's file from the Department of Defense and half of it is redacted. She asks Joe to read the file because she has a gut feeling she has another reason for being in Central City.

Frost knows how to swim but Caitlin might not.

Frost admits to sabotaging the Firestorm Matrix because she doesn't want to recombine with Caitlin.

Psych is able to overwhelm Cisco, Frost and Barry with visions of their worst nightmares.

Frost's worst fear is being betrayed by Caitlin and arrested for her crimes as Killer Frost.

Barry's worst fear is causing the deaths of his loved ones.

Frost and Caitlin agree to stay separated and become roommates, with Caitlin calling Frost her sister for the first time.

Cecile says that she thinks about what The Flash would do whenever she is afraid.

Barry suggests that Cecile can cancel out Pscyh's powers by projecting her courage, like how she projected her fear into The Top in 701.

Cecile is able to project an electric courage aura that seems to cause Psyche to dissipate.

Barry notes that his Speed Force Lightning didn't phase either Psych or Fuerza.

Barry begins having another spasm of some kind and puts himself into the cryo-pod to heal.

Kristen Kramer worked in Gotham for a while. She claims to be a big Knights fan.

Kramer finally admits to Joe that she's there, on the orders of the governor, to arrest Killer Frost.

An enjoyable episode that serves more as a showcase of Danielle Panabaker's acting talents than an expansion of the new Force storyline. The script isn't particularly strong despite Psych being an engaging villain, but the performances of the ensemble keep the story moving.