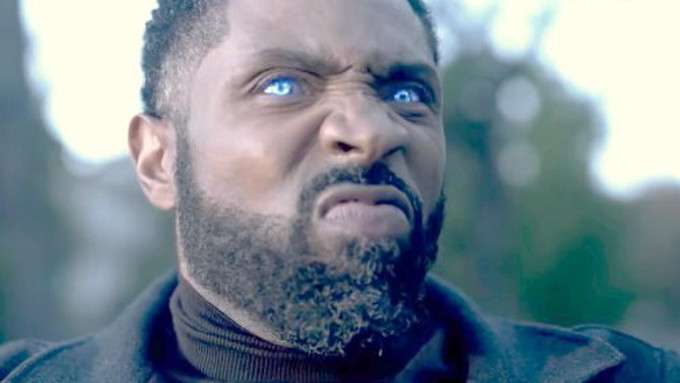 It's been one year since the battle to save Freeland and the American government shutting down the ASA. It's also been one year since Jefferson Pierce donned his Black Lightning costume. With The 100 waging war on a new gang, police corruption running rampant and Tobias Whale playing philanthropist, the time is ripe for Freeland's hometown hero to return. Unfortunately, there's a new metahuman-hating police chief taking over the department and Jeff's entire hero playing vigilante without him.

Batman and the Outsiders (Jefferson Pierce retiring from heroism only to be dragged back into action.)

How could Freeland go a whole year without a Chief of Police? (This is why they're trying to get the Mayor to quit.)

What happened to TC, Brandon and all the other teen heroes?

What happened to all the talk in last season's finale about starting a school for metahuman teens?

Cress Williams does some wonderful silent acting staring at bottles thoughtfully at this episode goes on.

The episode's use of music is fantastic.

The opening shot as we start off upside down and slowly spiral around to face Jefferson is an effective way of establishing the world is topsy-turvy.

This is the first episode in which Grace Choi's actress Chantal Thuy was credited as a regular member of the ensemble.

The new chief rival of The 100 gang is a new group called The Kobra Cabal. This seems to be a nod to the Kobra cult from DC Comics, of which the original Lady Eve villain was a member. While Lady Eve is not seen in this episode, it seems likely this is the gang she's formed to fight with Lala over control of Freeland's underworld.

Lynn notes that the Gravedigger serum she took should have worn off after 12 hours, yet it lasted for 2 days. However, the power proved ineffective on one human trafficker she attempted to control for reasons she cannot explain.

Alvin Pierce: Son, from the moment we come out of the womb, the clock starts ticking. So it ain't about the dying. It's about the living. Now... how are we going to live this life to make our dying something to celebrate and not mourn?

As the episode opens, it has been one year since the events of 316.

Jefferson has a conversation with the ghost of his father (presumed imaginary) as he visits the grave of Chief Bill Henderson.

It is established that Jeff quit being Black Lightning after testifying before Congress.

Violence in Freeland is still an issue, thanks to The 100 Gang and a new rival group called The Kobra Cartel.

The current mayor of Freeland is a man named Billy Block. He is being pressured to resign, despite an election being months away.

Jefferson attacks two white cops he sees harassing an unarmed black teenager in a hoodie. He blows up their car and electrocutes them to erase their short-term memories.

Grace is still in a coma, but Lynn is trying a new treatment she thinks will work around her shape-shifting powers.

Jennifer is encouraging Anissa to forget about Grace and move on with her life.

Jefferson and Lynn are in couples' therapy together. They have not been intimate in some time.

Gambi is approached by a woman named Lauren about a job with a private company called Monovista International that is investing in Freeland (i.e. fleecing it.)  Gambi turns down the job.

Lauren and Gambi were apparently involved at one point and she expresses her happiness he is not dead, saying she cried when she heard the news before kissing him.

Jefferson speaks at a televised memorial for Bill Henderson. His speech echoes the words his father said about Henderson earlier.

The new police chief is a woman named Lopez.

Lopez is quick to blame undocumented metahumans for Bill Henderson's death and promises to put an end to the threat they pose.

The President of the United States is said to have the last name Shaw. A scroll during the news indicates they are meeting with top Democrats in the hope of avoiding a government shut down.

Congress has just launched another investigation into the ASA.

A Senator Muhammed filibustered the Senate to prevent a bill regarding immigration and metahuman reform from reaching the Senate floor.

Tobisa Whale gives an interview in which he discusses his donating money to reopen basic social services shut down during the war in Freeland.

Anissa and Lynn both want to kill Tobias, but Jefferson is still committed to his oath to never take a life.

Jennifer has apparently begun joyriding with her powers, flying in full costume even when she's not patrolling.

Gambi tells Jefferson that the Freeland PD got a partial plate number from a street cam he didn't destroy after he attacked the cops. He was, however, able to hack the footage identifying Jefferson.

Lala is still running The 100 and is not pleased to see Tobias on TV playing the happy king.

Lala instructs his right-hand, Devante, to make sure the next shipment of their product has anti-metahuman weapons guarding it.

Lynn has apparently become a vigilante and is giving herself temporary metahuman powers in order to try and isolate the metagene and find a way to use it against Gravedigger or anyone else.

Lynn stops a woman from being trafficked off the street.

Someone using the phone Jefferson gave Henderson as Black Lightning calls him and tells him to meet him by the docks at 11 PM that night.

A police officer named Hassan Shakar is the cop who has Henderson's phone. He left a letter, written by Henderson before his death, for Black Lightning to find. He claims that Henderson gave him the phone and told him that Black Lightning was a good man.

Hassan Shakar admits he may have a problem with metahumans, but he freely admits to having a problem with Black Lightning, believing he abandoned Freeland.

Lala does not kill his men, instead arming them with anti-metahuman guns and telling them to set an ambush for Thunder and Lightning. He also notes Lightning is the most dangerous of the two.

Officer Shakar and Chief Lopez confront Jefferson at his office at Garfield High School. They tell him his license plate matches a partial connected to two police officers being beaten. Jefferson says he was driving past the area where the attack happened (15th and Magnolia) but denies any more information.

There are six cars in Freeland ending with the same number as Jefferson Pierce's car and all of those drivers have alibis for where they were at the time the cops were attacked.

Jennifer is shot with an DEG. However, she begins to heal almost immediately.

Anissa says this is the third 100 shipment they've hit this week, but she felt this one was a trap.

Gambi has a new base of operations, much larger than his old basement lair. (Based on the background, i could be set up in what was The Pit.)

After Gambi identifies the man who shot Jennifer, Jefferson confronts him in his home and electrocutes him so badly he'll be crippled for life. This gets the attention of Chief Lopez and Officer Shakar, who reach the same conclusion: Black Lightning is back. It seems to go without saying that they think he's Jefferson Pierce.

Tobias Whale joins the Board of Directors at Lynn's hosptital.

In the final scene, Jennifer blacks out while flying too high and begins to fall to Earth.

The last year's of events in Freeland are largely unaccounted for beyond the fact that Jefferson quit being Black Lighting, Thunder and Lighting are picking up his slack (with Gambi's help) and Lynn has become a vigilante to further test her meta-human power formulas.

Nothing is said about what happened to TC, Painkiller, or any of the other teen metahumans who operated out of Gambi's basement last year.

A lackluster throwback of an episode in which all the promise of the Season 3 finale is abandoned in favor of repeats of the most repetitive character beats of the past three seasons. Jefferson's daughters keep defying him and he's depressed. He and his ex-wife are drifting apart and he's depressed. The only reason change is that now Lynn has shifted her addiction from Green Light to vigilantism. Most of the new supporting cast has vanished without explanation and the only new villain is another cop who hates metahumans. This does not bode well for the coming season and if this is the best they could come up with after a year's hiatus, maybe it's for the best this show is ending after four seasons.