Batwoman Episode Guide: Season 1, Episode 18 - If You Believe in Me, I'll Believe in You 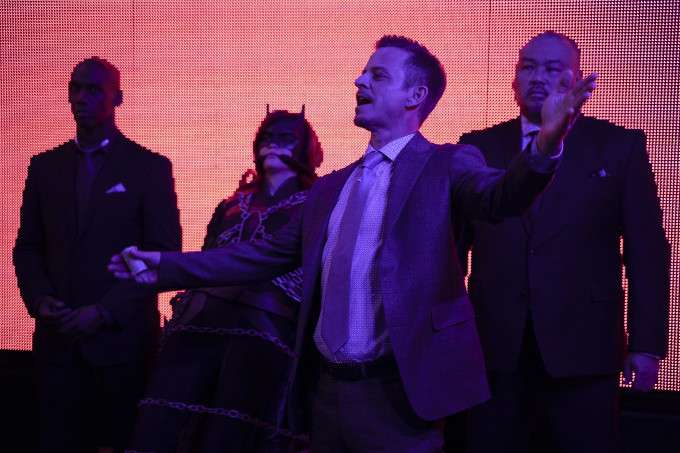 Kate recruits Luke and Julia for an undercover mission to recover one of the most important items in her cousin's arsenal, but Mary also wants to prove herself to her step-sister. Kate also reunites with an old flame, as Jacob visits Alice in Arkham to ask for a favor, not knowing that Alice has begun taking steps to turn Arkham into her own personal Wonderland.
Influences
Batwoman: Elegy by Greg Rucka & J.H. Williams.
Performances
As Mary proves her worth to the Bat-Team, so too does Nicole Kang dominate this episode and prove her place as the ensemble's VIP this week.

Artistry
The opening action sequence in which Batwoman rescues seven human trafficking victims is fantastic.
The Magpie Vs. Batwoman fight is pretty awesome too.

Bat Trivia
Mary suggests that Kate consider something in her cowl that electrocute anyone who touches her hair. While she dismisses the idea, it should be noted that both the Batmobile and Utility Belt have had similar defenses in the Batman comics.
Mention is made of a comic book heroine called Kitty Delgado, who is apparently some kind of master cat-burglar. Based on her white hair, low-cut costume and impossible figure, she seems to be a parody of Marvel Comics' Black Cat, who was a fairly shameless rip-off of DC Comics' Catwoman.

Technobabble
Mary suggests they could solve Kate's problems with her wig by running an electrical charge through her cowl so anyone who touches her hair gets electrocuted. Kate dismisses the idea, but Luke seems to consider it.
Dialogue Triumphs
(Kate and Luke enter Kate's office. Mary is there, holding two champagne flutes.)
Mary: Congratulations! On behalf of the medical profession both licensed and unlicensed, I'd like to offer my sincerest whatup on shutting down that chop shop.
(Mary winces and looks to where the bottle of champagne is on ice.)
Mary: (apologetic)  I wasn't sure how you guys celebrated.
Kate: Usually by icing my knuckles.
(Kate walks past Mary to the table, removes the bottle and plants her fist into the ice.)
(Mary is trying to talk Kate into letting her come on the mission.)
Kate: You're not going, Mary.
Mary: What?
Kate: I'm sorry. It's too dangerous.
Mary: Dangerous? I have been poisoned, stabbed, and nearly exsanguinated, and the fact that I have lived to use that word as a verb is proof that I can look out for myself.
(Johnny Sabatino just told Tommy Elliot he's keeping Lucius Fox's journal over the phone.)
Tommy: That son of a bitch was like a brother to me!
Alice: Clearly, you are an only child. Otherwise, you would know that our dear siblings are the ones most predisposed to betray us.
Tommy: Why aren't you more upset, considering you won't be getting the journal you so desperately want?
Alice: You should be more careful who you trust.
Tommy: If you can't trust your money launderer, who can you trust?
Alice: Hmm. No one. I only trust in the fact that people can't be trusted.
Tommy: So you knew that Johnny was gonna betray me?
Alice: No. I just didn't trust him not to.

Jacob: Tommy Elliot just hanged himself, or that's what it was meant to look like. Do you know anything about that?
Alice: (sighs) What do I know? I know I don't give two hoots about Tommy Elliot! I know I don't have any motivation to help you! And I know it is impossible for one to heal from the trauma of being locked in a cage when one is still locked in a cage!
Jacob: How many times did you tell me that Beth was never coming back? This is me admitting that you were right.
Alice: (softer) Do you know what they do to patients in here? They put electrodes on our heads and blast us with so much electricity that we seize. And I don't know the exact science, but... after about 10 jolts, let me tell you, you start convincing everyone around you that it worked.
Jacob: I'm sorry that it ended up this way.
Alice: (sobbing)If you mean that, then get me out of here.
Jacob: I can't. I have to protect the daughters that I have left.
Alice: (coldly) The thing they don't tell you about ECT is that once it's over all that's left is clarity. Ha! I see everything now. How this came to be. How it will end. And I promise you, Daddy, what I have in store for you is so much worse than a cage or electrodes or insanity. I guess you could say it's... worse than being me. But you'll see.

(Magpie is walking across the roof of The Lookout. Suddenly, Batwoman grapples up before her and lands on the roof ledge.)
Batwoman: Seriously?
Magpie: Early bird gets the worm.
Batwoman: You're a long way from Arkham.
Magpie: I told you I wasn't a jailbird.
(Magpie reveals her talons and the fight begins in earnest.)
Kate: Okay. So which one do you want to hear first -"Thanks for saving my ass" or "Sorry for always shutting you out"?
Mary: Uh... you pick.
Kate: I'm sorry for always keeping you at arm's length, but it's not because I don't trust you or think that you can't handle yourself, which obviously you can. It's because I've already lost one sister, and the thought of losing you, too, I... I can't, Mary. But thank you for not listening to me and risking your life to save mine. I guess I just have to get used to the fact that you are... a total badass.
Mary: Badass enough to be one of your real estate assistants?
Kate: I believe they prefer to be called associates.
Continuity
Kate saves seven people from a human trafficker who is selling them to a man for their organs. Unfortunately, the trafficker escapes.

Kate has issues with her wig during the fight. Luke suggests she try braiding her wig in the future, but Kate dismisses the idea.
Julia and Sophie search a warehouse full of property seized from Tommy Elliot looking for Lucius Fox's journal.
Tommy Elliot was a comic book collector and had a nude oil painting of himself.
According to Luke, Tommy Elliot owned 40 buildings in Gotham City alone.
Kate visits Tommy Elliot in Arkham Asylum to try and provoke him into telling her where the diary of Lucius Fox is.
According to Kate, Wayne R&D is the world leader in defense technology.
Dr. Butler (i.e. Mouse) had Tommy Elliot declared competent to stand trial for Lucius Fox's murder.
Tommy Elliot tells Mouse and Alice that Bruce Wayne is Batman. He also tells them that he wanted Lucius Fox's journal because it held the secret on how to destroy the Batsuit, in case it ever fell into the wrong hands.
Alice offers to make Tommy Elliot look like a new man in exchange for the diary.
Luke determines that after Kate visited Tommy in Arkham, he made a call to a night-club called The Lookout, considered by some to be the hottest night spot in Gotham City.
The Lookout is run by a man named Johnny Sabatino, who has been rumored to be laundering money for Tommy Elliot for years, as Tommy Elliot owned the building The Lookout was located in.
Kate suggests they sneak into the club as patrons.
Mary helps Kate find a stylish outfit that can conceal her Batwoman costume and again signals her desire to do something more to help her.
Kate finds out that Sophie outed herself to her mother and that Julia and Sophie now have a thing together.
Julia uses the call-sign Tuxedo One.

Kate uses the call-sign Red One.

Reagan, the bartender last seen in 104 whom Kate briefly dated, works at The Lookout.
According to Reagan, Kate has been buying up a lot of property around Bennett Park and lowering the rent.
Julia is captured after she cuts the power to the club.
Batwoman is knocked out by a booby-trap in Johnny Sabatino's office.
Tommy Elliot is reported as dead when Sophie goes to take him into custody, apparently having hung himself in his cell. In truth he's alive, but Alice removed his face and put it onto another body.
Mary offers to go into The Lookout to try and rescue Julia and Batwoman. She says that she knows Johnny Sabatino's cousin, Aria, having pumped her stomach after she overdosed.

Johnny Sabatino betrays Tommy Elliot, deciding to auction off Lucius Fox's journal himself along with Batwoman.
Alice sends Magpie to steal the journal from Johnny Sabatino.
The bidding on Batwoman starts at 2 million.

Mary forces her way into the auction and bids 10 million, claiming she wants the secrets of Batwoman's armor for Hamilton Dynamics.
Sabatino's men contact the SRR after Julia claims to be an agent in their employ. It is revealed that she was actually fired from the SRR six months earlier, after betraying them.
Jacob Kane visits Alice in Arkham and asks her for information on Tommy Elliot's death. She refuses to help him and says her revenge on him will be worse than he can imagine.
Mary only has 2.5 million in cash, but Johnny Sabatino agrees to sell her the Bat-Suit for that much... once it is pealed off of Batwoman's body.
The trafficker from earlier in the episode wins the auction.
Mary's briefcase contains a flash-bang. In the confusion, she uses another Bat-gadget to cut the chains holding Batwoman down.
Magpie steals the journal from Johnny Sabatino's office as the auction is going on.
Julia frees herself after an alarm goes off when Batwoman escapes.
Batwoman recovers the journal but Magpie escapes.
Kate and Reagan hook-up again and go to Kate's place.
Mary sees the Batcave for the first time and takes a selfie. Luke immediately erases the photo.

When Kate wakes up, Reagan has gone... and the journal is missing.
Reagan is revealed to be Magpie's sister and to have worked for her as an advance scout, but she swears she is done helping her since this cost her a great girlfriend.
Julia takes a phone call from her real employer, promising them the journal of Lucius Fox.
Alice removes the tracking chip from Magpie.
Mouse discovers that Lucius Fox's journal was written in code.
The Bottom Line
A solid episode that expands Mary's role on the team and throws in some wicked 11th-hour twists. It's also clear they're starting to set Tommy Elliot up to become Hush (who I can take or leave) but the entire ensemble is firing on all six cylinders this week.
Posted by Starman at 5:35 PM