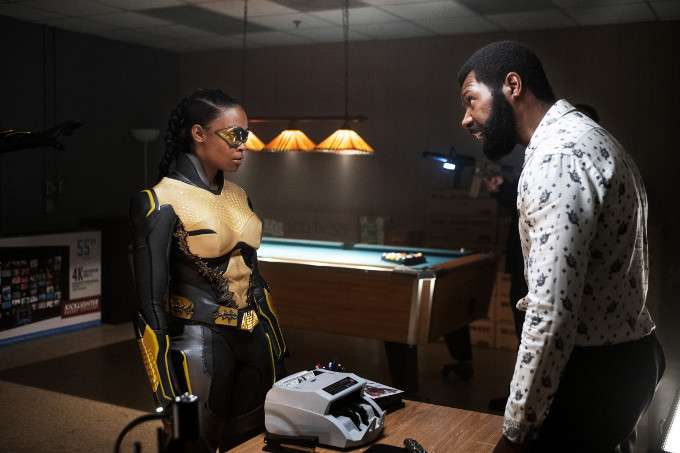 With Gravedigger and the Markovians moving in on Freeland, everyone begins making plans on how to deal with them. For the ASA and the underworld, this means making bargains and plotting how to weather the storm. For the heroes of Freeland, it means regrouping and reminding themselves of why they fight. But even as Grace and Anissa plan an impromptu wedding, Brandon abandons the team to seek his revenge on Dr. Jace and Khalil tries to escape Freeland and his Painkiller persona.

Lynn lists Erica among the kids like TC and Brandon who have nowhere else to go. It was said in the last episode that Erica had been returned to her family after the mission in Markovia.

If you had told me Wayne Brady could be an effective and sympathetic villain in the same vein as Magneto, I'd never have believed it until I saw his portrayal of Gravedigger.

The opening scene with Gravedigger is one of the strongest in the show's history, in terms of the fight choreography, cinematography, music and Wayne Brady's narration.

This episode confirms that Grace is developing super-strength to go along with her shape-shifting. In the Outsider series where Grace first appeared, Grace's main super-powers were enhanced strength and durability. She was later revealed to be a rogue Amazon.

The effects of the meta-booster formula vary from person to person. For a baseline human like Lynn Stewart, the effects last for roughly one hour. For an enhanced/altered individual like Tobias Whale, they last for 20 minutes.

Lynn theorizes that Gravedigger will be able to make use of one meta-booster at a time for 2-4 weeks.

Based on the corrected model Dr. Jace develops, Lynn determines that Gravedigger can absorb multiple superpowers and will retain them indefinitely.

Anissa guesses that Grace's newfound super-strength is due to her unique morphology and her body is reinforcing itself as a response to all the shape-shifting she's been doing.

Gambi comes up with a way to disable the Markovian communications.in the middle of dinner.

Gravedigger: People are going to wonder why I did what I did. They'll wonder why I brought all this death and destruction to Freeland. They'll wonder why I brought the pain. (sighs) I stopped caring what people think about me a long time ago. But I do still care about the truth. And the truth is this; the US Government experimented on me almost 80 years ago, granting me abilities beyond that of a normal person. I am officially, unofficially, the first meta.

Gravedigger: When I first joined the military, one of the crap jobs I was assigned to was the GRS: Graves Registration Services. Over 70 million people died in World War II. The ones who weren't identified, they could bury. On the US side, they gave that honor to us Negros. The colored troops. It was backbreaking, soul-draining work. But it was an important task. Because every soldier - every person - deserves a proper burial. So when I became a meta, the name Gravedigger fit because of my history and because I don't figuratively bury my enemies. I literally bury each and every one of them. No matter what they've done to incur my wrath. No matter how many of them there are. I make sure that each and every one of my opponents receives a proper burial. That is assuming there's enough of them left to bury. People always thought I was crazy for doing that. But to me it felt like the honorable thing to do. It felt right. What I'm about to do to Freeland feels right too.

Erica: I just got out of the pod. There's still so much stuff I need to do.
TC: Yeah, I've never even kissed a girl.
Erica: (smirking) Really?
TC: What?
Erica: Did you just use the fact that we might die tomorrow to scam a kiss?
TC: Yes. Yes, I did. (pauses) But it's true. I've never kissed a girl. C'mon, you can't be mad at that. (sighs) It was worth a shot.
(Erica leans over and gives TC a quick peck on the lips.)
TC: (surprised) Oh. Okay.
Erica: Now you can die happy.
TC: Wait - does that mean you like me?
Erica: That means I took pity on you.
TC: But does that count, though? I mean, I wasn't ready-
Erica: You're not getting another kiss.

Lynn determines that Gravedigger can use her meta-booster formula to copy the powers of any metahuman he can copy a DNA sample from.

Gambi has sources that told him Gravedigger's objective is liberating every metahuman in Freeland and/or capturing the ones who don't want to come with him to Markovia.

Gambi has also learned the ASA plans to order a nuclear strike on Freeland if they fear Gravedigger might take the city.

Khalil is stopped by ASA soldiers trying to leave Freeland. As they are beating him, Painkiller takes over and kills the soldiers.

Brandon quits the team because they are working with Dr. Jace now and he doesn't care about the fight between the ASA and the Markovians.

Gravedigger's goal is to form an independent metahuman nation within the boundaries of Markovia.

Jefferson's plan is to have himself, Thunder and Grace lead the charge, while TC, Jenniffer and Erica hang back to exploit any weaknesses in the Markovian lines.

As Jefferson and Gambi plot a strategy for the fighting, Gambi says he sympathizes with Gravedigger's motives. He also agrees that Jennifer should be on the front-line rather than being held in reserve to guard the retreat.

Lala has a woman inside of Lady Eve's operation who tells him about a doctor of some kind working for her.

Brandon breaks into Dr. Jace's lab and threatens to kill her if she doesn't tell him all about his family.

Lady Eve meets with Agent Odell. It is confirmed that the "doctor" she has is Lazarus, whom the ASA had lost track of. They were also unaware that Lady Eve was alive.

Lady Eve is informed she is still persona non grata with the ASA.

Lady Eve says she wants back in with the Shadow Board, in he previous position. She also tells Agent Odell that she knows the ASA is about to abandon Freeland.

Lady Eve offers to bring Agent Odell back from the dead if he gets killed in the coming war. Odelll refuses as he has his own conteingencies in place and he already made peace with his mortality.

Lady Eve says that she can give Odell the location of Martin Proctor's briefcase in exchange for a seat on the Shadow Board and her cartel back in the game. Odell is agreeable to this, saying she was always a competent earner and organizer for the ASA's clandestine activities in the past.

Grace's body is changing for some reason and she seems to be acquiring super-strength. She can now lift a solid wooden dinner table by herself.  Anissa guesses her body is just reinforcing itself after all the intense shape-shifting she's been putting herself through recently.

Lynn's analysis of Gravedigger's DNA confirms that he is a blood relative of Jefferson Pierce. This is why Jefferson, Anissa and Jennifer were able to stabilize their metahuman powers on their own.

Jefferson, in-turn, figures out that Gravedigger is his great-uncle - the illegitimate half-brother of his grandfather.

Anissa proposes to Grace. She accepts.

TC has never kissed a girl before.

Erica kisses TC. She denies liking him, however.

Jennifer asks TC if he can use his powers to locate Gravedigger. He says he thinks he can.  She asks him to do so, but to do it quietly.

Painkiller takes over Khalil's body again, locking him behind the same firewall he was trapped behind, and sets out to kill the Pierce family.

Lynn suggests inviting TC, Brandon and Erica to their family dinner at Anissa's. All of them except Brandon attend.

Lynn asks Jeff to be ready to kill Gravedigger if necessary.

Lala meets with Lady Eve and tells her he knows she apparently knows who was the last person to see Tobias before he left Freeland. He threatens a war between them if she doesn't tell him.

Lynn questions Anissa wanting to get married this quickly but Anissa is sure Grace is the one.

Brandon is revealed to have taken Dr. Jace captive and is holding her at his apartment.

Grace tells Jennifer and Jefferson that she's grateful to be accepted into their family, as she was never close to her family.

Gravedigger has video footage of the participants in the Markovian raid and watches it to observe the tactics of everyone involved. He has Brandon, Erica Moran and Grace Choi identified by name, but not Thunder, Lightning or Black Lightning.

TC tells Jennifer that Gravedigger is 30 clicks outside the perimeter of Freeland.

Jennifer intends to kill Gravedigger before the rest of the team risk their lives facing him. She sneaks out of the dinner party to do so.

Before the wedding can take place, Gambi is alerted to Gravedigger's arrival. Jennifer's absence is noted and Jefferson goes after her.

Lala tortures Dr. Blair - the last man to see Tobias before he vanished.

Jennifer throws herself into the Markovian camp fully charged. It doesn't even phase Gravedigger, thanks to a new forcefield power he's developed.

The perimeter fence around Freeland goes down after Jennifer is thrown into it.

Jefferson catches Jennifer after she's sent flying along the fence like the current was carrying her.

The episode ends with Gravedigger and Black Lightning charging each other.

A solid, if erratic, episode that tries to do too much with the time it has. Grace and Anissa getting married comes out of nowhere, as does the revelation that Gravedigger is related to Jefferson. Everything involving Lala, Brandon and Khalil could easily have been cut for time or worked into the finale. Honestly, it might have been better if the episode had focused on the wedding rather than trying to set up these small subplots for the finale. There's nothing bad in all of this, but the pacing is all over the place.
Posted by Starman at 2:13 AM