Describing the Leisure Suit Larry series as antiquated would be putting it mildly. The last "real" Larry game came out when I was still in high-school and the point-and-click adventure game genre is deader than disco. The entire series was built around immature humor for mature audiences and the kind of Brooksian satire that no film studio would dare distribute today. What kind of idiots would think you could possibly revive the LSL franchise now? 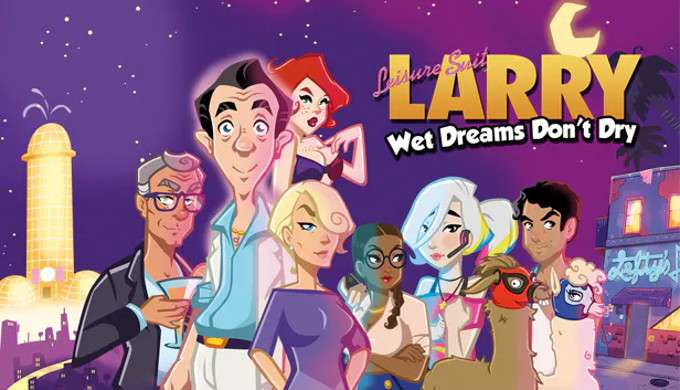 Quick history lesson for those of you who aren't familiar with the series. The first Leisure Suit Larry game came out in 1987 and put you in the shoes and titular suit of Larry Laffer - an unlovable loser who traveled to Lost Wages intent on losing his virginity on the eve of his 40th birthday.

Successive games saw Larry trying (and failing) to find love and/or sex in a variety of exotic locales, often needing to romance several women on his way to reaching that game's dream girl. The final official Larry game - 1996's Love for Sail! - ended on a cliffhanger, with Larry apparently being abducted by aliens. Sadly, a crossover with Space Quest (i.e. Roger Wilco & Leisure Suit Larry in The Road To Uranus) would never materialize and the franchise was ultimately used to sell sleazy party games of dubious quality that aren't worth discussing. So I won't.

That brings us to Wet Dreams Don't Dry which leaves any and all question of just what happened to Larry completely unanswered, as it throws him into the 21st Century and New Lost Wages. His bartender buddy Lefty is still around, but the rest of the world has changed. The singles' bars Larry frequented have been replaced with craft breweries, men now wear full beards and man-buns instead of leisure suits and nobody dates anymore - they just arrange hook-ups via something called Timber.

The world may have changed, but Larry is still the same; lusting after a woman who is far out of his league and being utterly out of his depth. Still, Larry is nothing if not persistent and he takes his current dream woman Faith at her word when she says she'll consider an encounter with him if he can match her rating on Timber. So begins a hopeless and hopelessly funny quest as Larry tries to romance as many women as possible to boost his rating and score a chance at scoring with Faith, inadvertently stumbling across a plot that may require Larry to save the world. Or not. 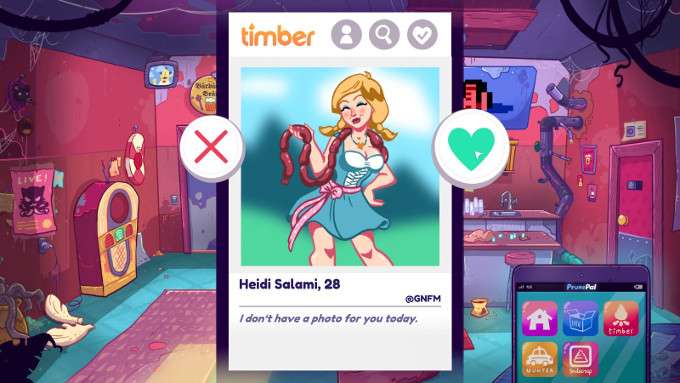 The most astonishing thing about Wet Dreams Don't Dry is how neatly they've updated the core Larry concept for modern times; not in how they've built an interface around Larry's new smartphone or the fact that Larry HAS a smartphone, but in how the basic idea of "horny jerk tries to get laid" has been developed into something that's not completely sleazy and gross. This is largely due to the writing taking a cue from the later Larry games, where Larry was surprisingly innocent and naive, frequently winding up in wacky situations after misinterpreting someone else's attempts at subtlety. (i.e. thinking a woman hiring him to kill her elderly husband was hitting on him.)

Larry's creator Al Lowe wasn't involved in the production of this game, but you'd never know it from the writing. They nail the tone perfectly, with a balanced measure of smart jokes, bad puns and not so subtle stabs at modern culture. To give you a taste, much of the game's plot centers around Prune - an all-consuming tech-firm - and the release of the latest edition of their popular PiPhone. The Prune logo looks like a vagina, their corporate headquarters like a giant cock and balls and the whole company is overseen by Bill Jobs. (BJ for short.)

Subtle it ain't, but the game is never mean-spirited. Yes, the cast includes a drag queen named Tuck R. Dale who keeps breaking into jail for the free cavity searches, but the humor is all on part with a typical drag performance or burlesque show. This won't stop some people from taking offense, however. Indeed, I felt inspired to write this review to balance out one particularly awful review from someone who dismissed the game entirely because of the character of Becky - a vapid influencer and social media maven, who is the first woman Larry meets in the game. 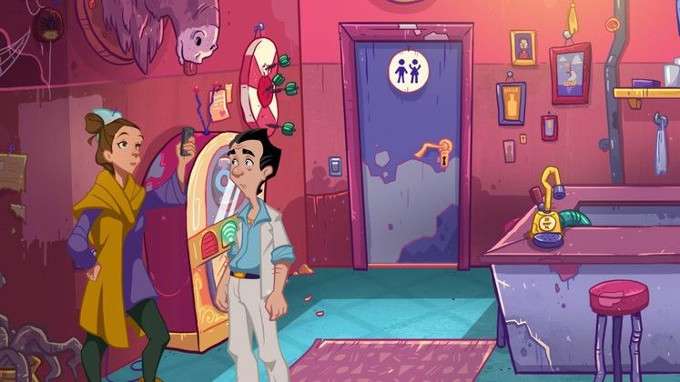 Is she a stereotype of the cliche Millennial woman? Only in the same sense the Larry is a cliched parody of the Disco Man. The comedy is based around how utterly unequipped Larry is to deal with a woman like this (who speaks in terms of likes and hits) and Becky exists only to emphasis what a fish-out-of-water Larry is in the modern era. Okay, she also exists to suffer indirectly because of Larry's actions but there's no "hur hur dumb Millennials/okay Boomer" jokes.

The animation is minimal, but the game artwork is fantastic. The voice acting is also solid and the original voice of Larry, Jan Rabson, returned to play Larry once again. The gameplay runs smoothly enough, with the game walking you through new features as they are introduced. For adventure game newbies, there's an option to briefly highlight the objects you can click on, if you aren't sure where to go. The puzzles are rarely illogical and on the one occasion it is the game hangs a lampshade on the puzzle in question almost immediately. I only became hopelessly stuck once and that was only because I failed to click on something more than once. 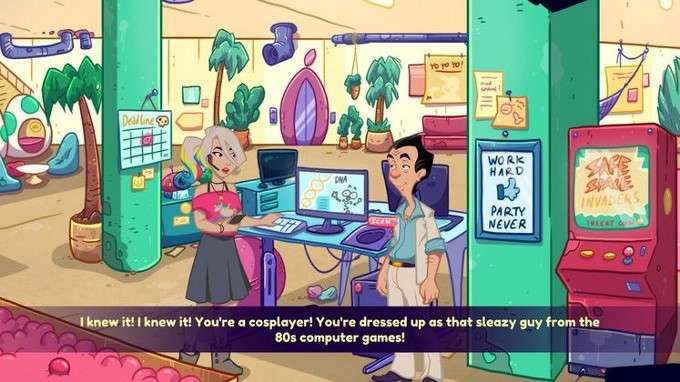 The only real flaw to Wet Dreams Don't Dry is a certain dryness. (If I had a dollar for every time I heard that...) There's not nearly as many of the funny random descriptions you got from looking at the background or the characters as in earlier games. Larry also describes everything himself, rather than by having a narrator talk to him and the audience. And oh, how I would have loved to have Neil Ross's narrator back for this one to mock Larry as he stumbles around the city.

Despite that, Wet Dreams Don't Dry gets more right in trying to bring Leisure Suit Larry into modern times than it gets wrong. And the game's epilogue leaves ample room for a sequel, suggesting that we may not have seen the last of Larry Laffer after all. Thank goodness for that!
Posted by Starman at 8:31 AM