The Flash Episode Guide: Season 6, Episode 4 - There Will Be Blood 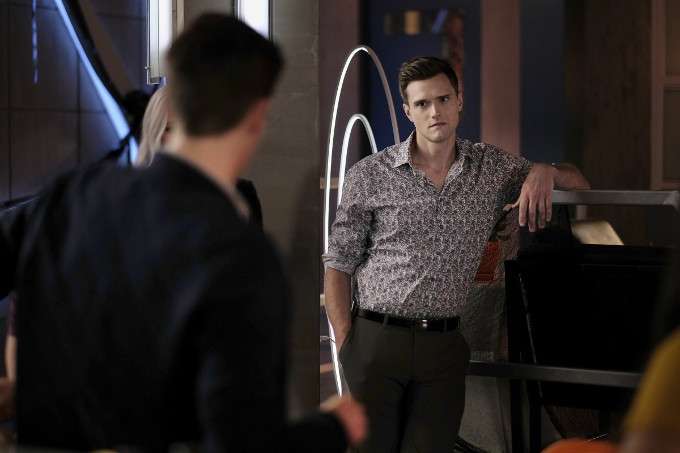 Barry's efforts to prepare everyone for a world without The Flash are derailed when Cisco starts scheming to find a way to save him from the coming Crisis. Ralph also has a hard time processing the idea of a world without Barry Allen. Meanwhile, Ramsey Rosso taps into his newfound powers to save his life and loses his humanity in the process.

The zombie movies of George Romero, the Venom movie (the effects to animate Ramsey's blood powers) and The Flash comics of Joshua Williamson.

You'd think Barry would take Frost's opinion on Ramsey Rosso into account before ordering Cisco to save his life. at least when it comes to finding a worthwhile person to save. But we do have to set up the irony of Barry being responsible for empowering a dangerous metahuman, don't we?

Cisco, as an engineer, is wholly unqualified to do most forms of medical work, never mind develop a cure for cancer!

Barry said he was going to make Cisco the team leader after his death. Isn't that Iris' job?

Couldn't Ramsey add adrenaline into his cure instead of taking blood from scared people?

The special effects for Bloodwork's powers look like a cheap version of the effects for Venom.

Hartley Sawyer makes Ralph's depression in the fact of Barry's death incredibly convincing, given how little time he gets to work relative to the Cisco storyline.

Jesse L. Martin spins most of the episode giving inspiring speeches to most of the cast, making me realize how much I missed him during Season 5. While the dialogue in the final scene is sickly sweet, Martin (and to a lesser degree, Grant Gustin) make it work through sheer force of will.

Iris makes reference to Midway City, when discussing her lead on Sue Dearbon's whereabouts. In the DC Comics Universe, Midway City was home to the Silver Age versions of Hawkman and Hawkwoman as well as one incarnation of the Doom Patrol. It is located somewhere in the American Midwest, though differing comics place it in Illinois and depict it as being something like Chicago or place it in Michigan, near Sault Ste. Marie.

The cure-all Nash promises Barry and Cisco in exchange for their help is located in McCulloch Technologies.The company is named in honor of the second Mirror Master. Evan McCulloch.

Ramsey determines that the black blood he absorbed from Mitch Romero's system temporarily cured his HLH cancer but he requires more blood to create a permanent cure to save my life.

Nash Wells requires an anti-vibrational crypto-circuit.to complete his work on Earth-1. He describes his work as thermic excavation.

The Dominators developed an extremely rare bio-regenerative serum capable of healing organic tissue. Injecting it into  the healthy cells of an organic being causes them to replicate and replace unhealthy cells. Unfortunately, the shelf-life of it is limited and it won't work on someone in the advanced stages of something like HLH cancer. Nash Wells claims it might even be able to protect someone from the effects of antimatter, but it seems likely he was just going along with Cisco's suggestion. In the wrong hands, Nash Wells says the serum would be a 12 on a danger scale of 1 to 10.

Nash Wells is armed with a device, similar to Sara Lance's Canary Cry disks, which plays a high-decibel frequency that hurts anyone who hears it. The device also seems to cause electrical interference, causing the lights at McCullouch Technologies to go out and the emergency lights to come on. It can be deactivated by a control on Nash Well's bracer.

Cisco has a device that makes alarm noises. He uses this to distract Barry and Nash while he steals the serum so he can use it on Barry.

The Dominator serum must be kept at -15 degrees Celsius.

Nash's smoke bombs allow the thrower to teleport themselves to a pre-determined safe location - i.e. STAR Labs' lounge. It is not explained how it works.

Ramsey determines that the reason why his dark-matter based cure isn't working is that Mitch Romero was afraid for his life when he died and his blood cells were flooded with epinephrine. The adrenaline released while being attacked is the true bonding agent, which mean that in order to get the blood he needs, Ramsey has to kill people.

(Nash Wells offers to help Team Flash if they help him with his work.)
Barry: Your work? What's your work?
Nash: It's thermic excavation.
Cisco: You're a cosmic myth-buster who also happens to be a geologist?
Nash: (beat) Sure.

Barry: Let's just say that we trust you-
Cisco: We don't!
Barry: -which we obviously don't.
Nash: (unoffended) Understood.

This episode takes place a few days before Halloween 2019.

Cisco refuses to accept that there's no way to save Barry and stop him from dying in the Crisis.

Iris says that it is six weeks until the Crisis is meant to happen.

Ramsey's newfound power gives him the strength to snap a padlock and the precision to make it look like it was cut with a power saw.

Barry decides to distract Cisco from his upcoming death by putting him to work on the problem of curing Ramsey Rosso's cancer.

Nash Wells reveals himself to Barry, after also revealing that he bugged Cisco somehow when they first met.

Nash offers to help Barry find a cure for Ramsey Rosso's condition in exchange for STAR Labs building him an anti-vibrational crypto-circuit.

Iris gives Ralph a lead that Sue Dearbon was spotted in Midway City. Ralph thanks her, but doesn't act on it.

Ramsey's second attempt at making a serum based on Mitch Romero's blood fails, only causing the black blood substance in him to surge further out of control, causing him great pain.

Nash Wells leads Barry and Cisco to McCullouch Technologies, saying they have an alien serum that could heal Ramsey.

Ralphi is binge eating and tells Iris that he's given up on the Sue Dearbon case.

Cisco steals the serum and hides it, pretending it was already gone when he cracked the safe holding it.

Barry figures out Cisco was lying to him later.

Barry had planned to make Cisco the team leader after his death, but is questioning that given Cisco's actions.

Ralph has been depressed into inaction because he thinks trying to save anyone is pointless if he can't save Barry.

Joe tells Ralph that he can't save everyone, but he can save Sue Dearbon.

Frost tells Cisco he can't save someone who doesn't want to be saved and trying to force the issue could take him down a dark path.

The serum doesn't work on Ramsey's cells. Apparently the cancer is too far gone.

Ramsey determines that for his cure to work, he must drain the blood of people who are afraid. This leads him to attack Central City Hospital.

Ramsey also determines that he can control the people he kills, though they act like movie zombies and dissolve into black blood once he gets a certain distance away from them.

Ramsey killed five people in his attack on the hospital on Halloween night.

Ralph tells Iris he is going to Midway City to start the search for Sue Dearbon anew.

Nash Wells is apparently tracking the Monitor, who has a base in the sewers of Central City and the circuit Cisco made for him helps him follow his energy signature. The episode ends as Nash is about to hit the wall the Monitor walked through with a pickaxe.

Manages the neat trick of seeming like total filler, even though it's almost wholly devoted to pushing the villain's storyline forward. It's odd, but the scenes of everyone being depressed Barry is going to die and coping with Barry's death at the end are the best moments of the episode, repetitive as they are. Everything involving Bloodwork is equally repetitive and predictable, yet somehow stupider and less enjoyable to watch.
Posted by Starman at 12:13 AM