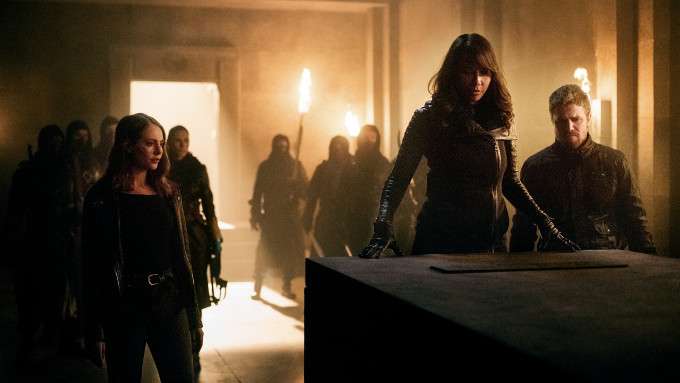 Reunited with his sister, Thea, Oliver finds himself in a race against Talia Al Ghul and the Thanatos Guild in the catacombs of the League of Assassins' headquarters. Meanwhile, Diggle and Lyla embark on a special ops mission together, to save Bronze Tiger's family. And in the far future of Star City 2040, the new Team Arrow take the fight to the Deathstrokes.

Indiana Jones movies (name-dropped, general theme of exploring a booby-trapped tomb, the Phoenix tile puzzle is lifted directly from the "name of God" challenge in The Last Crusade) and the present-day storyline of Arrow Season 3 (focus on League of Assassins drama, Diggle and Lyla spywork)

Many of the fights are shot too close. This would make it hard to see the action, if the poor lighting throughout the episode didn't make it impossible to see anything in general.

The Star City future storyline seems to suggest that the membership of the Star City Reunification movement is a big secret. Weren't they all present and trying to recruit new members at an incredibly open gala in the season 8 premiere?

The Thantos Guild die stupidly trying to get past Oliver (fully armed with a bow) and the booby trapped tomb of Al-Faith, by charging him one-at-a-time, while climbing down a rope.

Mia's throat-wound seems to heal up awfully quick when it's time for her to cradle Zoe and look anguished.

As always, Lexa Doig is a delight as Talia.

This episode introduces the Arrowverse version of Sandra Hawke - the girlfriend of Ben Turner and mother of Connor Hawke.

In the original Green Arrow comics, Sandra "Moonday" Hawke was one of Oliver Queen's many short-term girlfriends during his free-loving college days. She became pregnant as a result of one of their dates, but refused to seek support, being determined to prove she could make it on her own as a single mother. Her son, Connor, would go on to meet his father nearly two decades later and eventually take up his mantle, becoming the second Green Arrow.

This episode sees Lyla and John return to Kasnia - a fictional nation first introduced into the DC Comics lexicon by Superman: The Animated Series. It has been repeatedly used on Arrow, The Flash and Legends of Tomorrow whenever they needed a setting in Eastern Europe. On Earth-38, Kasnia was the nation which discovered the Supergirl clone that become known as The Red Daughter.

Felicity hard-wired the power grid of The Bunker through the floor. This can be used to electrocute anyone standing in the main room through a control hidden in a safe room.

Zoe makes use of a device that creates a stunning sonic attack similar to the Canary Cry. Sara Lance originally used this same device as The Canary in Season 2.

(Oliver explains his bargain with The Monitor)
Oliver: He asked me to help him, but he's not very good at sharing information with the people he's working with.
Thea: (dryly) Sounds like somebody else I know.
Oliver: I need to be 100% sure that I can trust him. I know it's a long shot, but I was hoping that Nyssa could tell me what, if anything, the League knows about him.
Thea: Okay. What are you not telling me?
Oliver: He's seen the future. He's seen me die. It's soon, Speedy.
(There is a pause as Thea looks at Oliver expectantly.)
Thea: And?
Oliver: (deadpan) Take as much time as you need to be upset.
Thea: Ollie, come on. You've cheated death more than any of us have by this point.
Oliver: This is fundamentally different than anything that we've ever dealt with before.
Thea: Okay. Well, let's try to figure out what we're dealing with, but like I said, Nyssa's not here.
Oliver: Sara hasn't been able to help either.
Thea: We've kind of killed off every League member, haven't we?

Oliver: So now you're back to your old exploits?
Talia: With the League gone, the region has become quite unstable.
Thea: And you think training a bunch of assassins in a place like this is gonna stabilize it?
Talia: I think it a wiser course of action than declaring a one-woman war on the Thanatos Guild.

Thea: What is going on with you, Ollie? You were never this overprotective when I left Star City.
Oliver: Things have changed. I left my family behind, Speedy. And I miss them. And every day, I wrestle with whether or not I made the right decision because maybe I didn't. And I saw an entire world wiped out of existence. A world that you weren't in, by the way, because I wasn't around to protect you. I'm sorry, Thea, but the only way that I can bear this is if I become 100% certain that my sacrifice, that my death... will protect the people I love. I need my family to be safe.
Thea: You know, I've been thinking a lot about Mom and Dad lately, wondering what they would think about the lives we've chosen. All the mistakes they made, all the lies they told...In their own very, very messed up way, they thought they were protecting us.
Oliver: Well, they weren't. They didn't.
Thea: No, but it did help us become the people we are today. They turned us into heroes. We can't change the future, Ollie. The past teaches us you might as well not bother trying to.
Oliver: (chuckles) When you'd stop being my baby sister?
Thea: I never did. I just grew up a little bit. (sighs) Now can we please get off this mountain?
Oliver: Yeah.

Talia: It is your destiny.
Thea: Yeah, but, see, about that. I don't really believe in the whole fate, destiny thing. We can all make our own choices.
Talia: Meaning?
Thea: Meaning I don't think the world needs another League of Assassins. It could use League of Heroes. It wouldn't be a one-woman job.
Talia: You'd extend me that honor despite my betrayals?
Thea: You made a mistake. We've all made mistakes.
Talia: Not one but two women to wield my father's sword? He would be aghast. (Talia smiles and chuckles wickedly) I accept.

Oliver: I can't believe I'm saying good-bye to you again.
Thea: Well, you're not. Think of it as a "See you later, and please don't die."


The reactions to Zoe's death are pure hammy Narm.

Oliver runs into Thea in the area around Nanda Parbat.

Oliver catches Thea up on recent events, including her new niece.

Thea makes reference to 303 and her time in Corto Maltese, where she used Mia as an alias.

Thea now has a scar on her right cheek - the result of a battle with Athena of the Thanatos Guild.

Nyssa Al Ghul is off dealing with some League business. Thea thinks she is in Thailand.

Thea saw Roy Harper, sometime after the events of 720, and he told her about the fight with The Ninth Circle. He is currently off "dealing with his demons/"

Oliver contacted Sara Lance regarding the League's history and any connection the Monitor might have to it. She didn't know anything.

Lyla has been keeping an eye on Sandra and Connor Hawke since Ben Turner was recruited to ARGUS. He's currently on a deep-cover mission and Sandra missed a check-in for the first time.

Lyla has pictures of Sandra and Connor at an airfield in Kasnia - far from where Ben is now and any mission he's ever run for any organization.

The plane in the photo of Sandra and Connor belongs to Abdul Nardoc - a Kasnia philanthropist who is believed to have terrorism ties.

Lyla needs John to work with her on this mission, because she's still ferreting out all the corruption within ARGUS and can't trust anyone else with this mission.

Oliver refers to the events of 705 and how Talia owes him a debt for helping her escape from prison. He agrees to consider the debt paid if she helps him find the answers he seeks regarding The Monitor among the League's records.

The Karan Shah is the formal name of the League of Assassin's fortress and central base of operations. It has been destroyed, but the catacombs underneath it remain intact.

Talia's father had the League's historical records moved into the catacombs to keep them safe.

One of Abdul Nardoc's associates is Farzad Qadir - the son of Gholem Qadir - the man Ben Turner killed to save Lyla Michaels' life while serving in the Suicide Squad in 216.

The Chronicles of Al-Fatih are the journal of the founder of the League of Assassins and the first man to hold the title Ra's Al Ghul. Legend has it that he was given advanced knowledge by one of the sky gods. Talia thinks this could be The Monitor. When the book is located, it contains a drawing of the Monitor and a note that the end times would come if the League ever abandoned their mission charge from "the sky god" to maintain the balance between good and evil.

Burning the false Chronicles of Al-Fatih reveals a stone sphere, marked with constellations, which somehow reveal the true location of Al-Fatih's tomb. It turns out to be on top of the mountain where Oliver dueled Talia's father in 309.

Talia poisons Oliver to keep him from getting to the tomb ahead of her. He is found by Thea, who he previously ordered to go back to their camp.

Talia is captured by Athena, who then captures Oliver and Thea and intends to use them to test for traps in the tomb of Al-Fatih.

Talia and Thea enter the tomb while Oliver holds off the Thanatos Guild.

Diggle and Lyla save Sandra and Connor Hawke.

All of the Thanatos Guild die.

Thea beats Talia in a duel for the Sword of Al-Fatih.

Talia passes command of her students over to Thea, but Thea refuses to restart the League of Assassins. She suggests, instead, that she and Talia start a League of Heroes.

Ollie makes reference to the Queen Family Hozen and how Felicity gave it to William.

William was able to protect himself from the Deathstrokes swarming The Bunker, having remembered that Felicity hard-wired the electricity for the complex through the floor. This enabled him to use it to shock them as they entered the main room.

William determines that John Diggle Jr. and the Deathstrokes are killing everyone involved in the Star City Unification movement. 10 have been killed so far.

Mia pushes the team to make a direct assault on the Deathstroke's hideout.

Zoe is killed by John Diggle Jr. while saving Mia.

Mia, William and Connor are sent back in time to 2019 and the original Team Arrow bunker.

Oliver is seemingly teleported to the Team Arrow bunker by the same flash of white light.

Roy, Nyssa and Thea apparently destroyed the last of the Lazarus Pits some time between this episode and 616. They have been working since then to stop the Thanatos Guild from reforming the League of Assassins.

Zoe Ramirez is unceremoniously killed off to give everyone else on Team Arrow 2.0 some angst. (Also, apparently, to not further confuse viewers with the presence of another Black Canary in the upcoming Green Arrow and the Canaries spin-off.)

A mixed bag, overall. The bits with Thea and Talia are good, but that owes more to Willa Holland and Lexa Doig nailing these characters out of the park with every appearance after so many years. The stuff with Diggle and Lyla is competently acted, but seems very repetitive. And the future storyline is as lackluster as everything else done with the flash-fowards since Season 7. Ultimately, it succeeds only because of some strong speeches and strong performances, which seem wholly separated from the overall direction and staging of the episode, which are outright horrible at times.
Posted by Starman at 4:44 PM