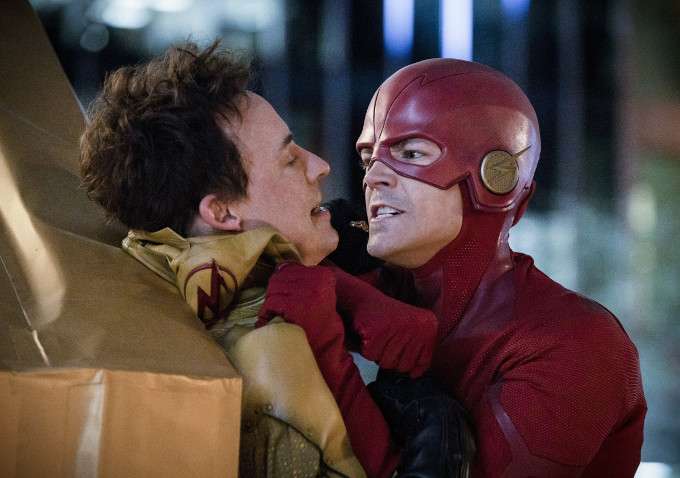 The Reverse Flash has been freed thanks to his indirect manipulation of the timeline. Now, Barry Allen and his allies must face his greatest enemy once again.

The Flash comics of Geoff Johns

Cecile's powers are now described as being emphatic rather than telepathic. (She could be both, but she's always been shown as more of a mind-reader before.)

How does Iron Heights acquire Cicada's dagger in 2049 when Cicada had never been captured or identified in the original timeline Nora came from?

Why isn't Orlin Dwyer restored to life after Cicada II is made to have never existed? Logically, if she never existed, she never could have killed him. (Come to that, killing Dwyer should have made that version of Grace Gibbons stop existing, since she said that he trained her and mentored her to become the new Cicada in her timeline.)

Why does the dagger not disappear until just before Thawne is to be executed? Logically, if the dagger was destroyed decades earlier, it never would have been there to keep Thawne imprisoned in the first place.

It isn't made precisely clear why the destruction of Cicada's dagger causes Nora to stop existing. It could be either because Nora never felt the need to come to the past to fight the one enemy her father never beat or because Thawne wasn't around to teach her how to use her powers.

Again, Jessica Parker Kennedy steals the show with her speeches and the earnestness with which she handles Nora's death scene.

When Thawne escapes, he tells Barry he will see him at their next crisis. This is almost certainly a nod to the 2019 Crisis On Infinite Earths crossover event.

In the closing montage, Ralph is seen in his office looking at a file labeled Dearbon. In the classic DC Comics, Ralph married an heiress named Sue Dearbon, who became Sue Dibny and eventually a member of the Justice League. She was the only non-powered person with no codename to do this.

Upon examining Ralph after he is shot with the mirror gun, Caitlin says that his cells have become kinetically inverted.

Caitlin says that the last time Ralph lost control of his body, they created a stabilizing enzyme that reset his body back to its original form using vulcanization and muscle memory.

Sherloque says a vibrational jolt should help Ralph to reassert himself.

Swiss Ash is one species of the flowering ash trees indigenous to Europe, but also makes up a sizable amount of the Kollins Woods - the closest forested area to Central City.

A speedster with a connection to the Negative Speed Force can use it to negate a paradox that would cause them not to exist. This is apparently how Thawne has managed to survive in some form despite being erased from existence twice.

Nora: (V/O) I always wanted to be a hero, to use my extraordinary abilities to help people. That's why I came here. To meet my family, to stop Cicada, help fix the Flash's legacy, and save him from disappearing in the future. I believed I could do the impossible, but I never imagined it would turn out like this.

Barry: Sometimes in life, all we can do is just live with the consequences. So what you have to ask yourself is what kind of hero are you gonna be? One who takes a do-over after every mistake? Or one who lives with it and moves forward?

Killer Frost: What a bunch of sentimental crap. You two sound like a friggin' Hallmark movie. (This is doubly funny given Danielle Panabaker has been in a few Hallmark movies.)

(The Cicada Dagger disappears. Thawne regards the guards preparing him for execution.)
Thawne: Gentlemen. I hate to inform you... but you're all dead.

(Thawne stares down all of Team Flash)

Thawne: Isn't this nice? Team Flash, back together again with a new guy. (nods to Ralph) Ralph Dibny. Welcome. You should be dead.
Ralph: Yeah, I guess we have that in common.
Thawne: (chuckling) We'll take care of that in a moment.

Nora: Hi, Mom and Dad. If you're watching this, it means that something went wrong. But I don't want you guys to be sad. I'm not. I always wanted to be a hero, to use my extraordinary abilities to help people. That's why I came here: to meet my family, stop Cicada, help fix the Flash's legacy, and save him from disappearing in the future. I believed I could do the impossible, but I never imagined it would turn out like this. I'm glad it did. I wouldn't change anything about my time with you, my sweet parents, the most important people to me in the world. I wish I could be there to celebrate every new chapter, to witness every success. Just know that no matter where I go in my life, you'll always be my side. Because of you, I know I will never, ever, truly be alone, and I will feel your love and support like a warm hug comforting me, wishing me to be the best person I can be. Thank you for everything For making me a hero and for loving me even if I wasn't perfect. Please remember that I love you both and I always will, no matter what the future brings.

Ralph throws himself in front of the mirror gun blast. This causes him to turn into something resembling a man-size geode.

All of the metahumans not cured in 521 are sent to a secure CCPD facility.

Barry and Nora discover a wood fragment at CCPD they think might lead them to Cicada.

Sherloque figures out what Ralph deduced - that Thawne was helping Nora to stop Cicada, because Cicada's dagger is being used in the future to negate Thawne's powers and keep him imprisoned.

Cisco reveals that he works at STAR Labs and is Vibe to Kamilla. She is cool with it and says she has no trouble with him trying to date her and be a hero.

Caitlin makes reference to 404 and the first time Ralph lost control of his body.

Cisco makes reference to how he was playing Lady Gaga when Barry first woke from his coma in the Pilot.

Ralph is left unable to speak straight for a short time after being vibrated back to normal.

The wood fragment Nora and Barry found is revealed to be Swiss Ash and is traced to Kollins Woods, which is 12 miles from Central City.

Cecile is used as an early-warning system, being able to sense Cicada's hatred.

The team breach Cicada II into Cisco's force-field at STAR Labs, giving Nora the time she needs to help the child Grace Gibbons get out of her coma and convince her to take the metahuman cure.

The shard of metal inside Grace Gibbon's head is soaked with enough dark matter it negates the metahuman cure. This means Team Flash still needs to destroy Cicada's dagger with the mirror gun in order to defeat Cicada II.

With her metahuman powers as a child neutralized, Cicada II ceases to exist.

In Iron Heights 2049, the Cicada dagger blinks out of existence just as Thawne is about to be executed.

Barry can now use his powers to briefly reverse time.

Nora vanishes from existence because with Cicada's dagger destroyed, there was no reason for her to ever come to the past.

Thawne says that Nora can save herself  by running into the Negative Speed Force, but she refuses to give herself over to it to save herself.

Sherloque returns to his Earth to be with Rene Adler.

Cisco removes his powers with the metahuman cure.

Grace Gibbons is set up with a nice foster family.

Captain Singh announces that he's been appointed the new Chief of the CCPD and is promoting Joe West to the rank of Captain.

Captain Singh reveals that he figured out that Barry was The Flash.

Cisco reveals that he made Caitlin and Killer Frost a new costume.

Nora's time diary and a video she made remain behind.

As the episode ends, time changes and the newspaper from the future which said Barry disappears in 2024 changes, with the date rolling back 5 years to show that Barry now disappears in 2019.

Nonsensical, painful and poorly explained on every level. Granting that the rules for time-travel have never been consistent and are driven by what is the most dramatic rather than any decent standard set of physical laws, the script for this episode needed a few rewrites.

It isn't clear, for instance, if Carlos Valdes is leaving the series or not now that he's removed his own Vibe powers. There were rumors he was leaving the show, but nothing that was confirmed with the same sense of certainty as Emily Bett Rickards leaving Arrow. We don't have a scene of him resigning his job from STAR Labs and there is no reason in the episode why he would need to do so.

Still, Nora gets a great ending to her story but the selling of it is due more toward Jessica Parker Kennedy's charisma than any craft in the writing or special effects. Both Cicadas are finally dead and gone. And it looks like we'll be getting Ralph and Sue together in Season 6, just in time for the end of the world.
Posted by Starman at 1:03 PM