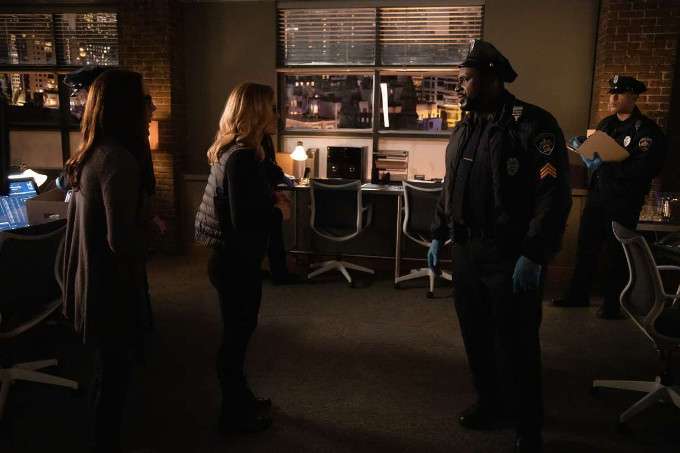 Team Arrow is trapped in a collapsing building, as Smoak Technologies is raided by the police, who have a warrant for Felicity's arrest. Can Team Arrow reassemble to save their city from the Ninth Circle's efforts to frame them for their terrorist attack?

The Green Arrow comics of Benjamin Percy and the animated series The Zeta Project.

Again, the drama of this episode in the modern day scenes is anti-climactic thanks to the future scenes revealing that Team Arrow will be fine.

Colin Donnell's cameo is blatant fan service but it's a fun bit of business that ads a new level to Oliver's struggle for survival.

The direction on the sequence of Roy jumping into the benzene cloud is so tensely, tightly directed you honestly forget that Roy can't NOT survive it.

Continuing the long Arrow tradition of each season's penultimate episode sharing the name of a Bruce Springsteen song, this episode is titled "Living Proof". Released on the 1992 album Lucky Town, Springsteen wrote the song about his young son and the feelings he felt as a father. This would seem to relate to Oliver's feelings regarding the pregnant Felicity, but the song makes mention of being imprisoned and a man who has lost all faith in himself - an apt description of Oliver in Season 7.

The robot soldiers Galaxy One makes that are powered by the Archer Network are designated Zeta. This seems to be a nod to Zeta - a robot assassin who first appeared in the Batman Beyond animated series, before starring in his own spin-off, The Zeta Project. Zeta developed his own independent morality system and refused to kill, going on the run to avoid being reprogrammed.

When Felicity arrives at Smoak Technologies, she asks Alena for an uplink gain augmenter.

Felicity's security system is programmed to generate a remote-detonated nanoelectric pulse that shorts out electronics. It also plays a stunning noise similar to the Canary Cry collar.

The chemical formula for benzene is C6H6. It is one of the most widely used industrial chemicals in the world and a known carcinogen. Exposure to large amounts can cause permanent nerve damage and a painful death.


Tommy: You look shocked. Um, is it the beard?
Oliver: (weakly) Uh-uh. You look good.
Tommy: (grinning) Yeah, I know.
Oliver: Ohh. I must have a really bad concussion.
Tommy:Yeah, man. A building just collapsed on you. It could be a little PTSD, too. That position that you're in with the rebar? It is remarkably similar to how you found me all those years ago.
Oliver: The night you died.
Tommy: Yeah. And I got to tell you, man, it looks like the same thing is gonna happen to you if you don't get out of here, like, right now.

Tommy: You know, it is insane that we both had secret half sisters.
Oliver: Well, yours didn't try to kill you, did she?
Tommy: Well, you should give Thea some credit. I died before she had the chance to try.

Tommy: What kind of solution are you planning for her?
Oliver: The one she deserves. She let our father die.
Tommy: He abandoned her, Oliver.
Oliver: She's been manipulating me, she's been manipulating the team for months, posing as some sort of hero. The woman's a murderer.
Tommy: So now you're gonna be one, too? And here I thought that we were done with all of that.
Oliver: I don't see another choice here, Tommy.
Tommy: It is exactly that kind of attitude that's gonna keep you stuck down here.

Oliver: I need to get out of here.
Tommy: You will. Trust me. What you really need to worry about is what happens when you do.
Oliver: Why?
Tommy: Everything you've done this year working with the cops, fighting for the city without a mask? You've got a shot at something we never had.
Oliver: What's that?
Tommy: A clean slate. You can't shed your past, but you can keep it from hurting your kids. That's something our parents could never give us, but it is never, ever going to happen, Oliver, if you keep seeing red with Emiko.
Oliver: As long as she's still breathing, my family will never be safe. You know this, Tommy.
Tommy: Then you haven't moved past your family's mistakes, Oliver. You haven't broken the cycle of lies and hate. You're trapped. You're trapped just like you are in this room.
Oliver: But you're not here.You are a... You are a figment of my imagination that has been sent here to test my resolve. Won't work.
(Suddenly, the wall collapses, revealing a tunnel with light.)
Tommy: Looks like you found your way out.
Oliver: To stop Emiko, if I need to be as ruthless to her as she was to my father, so be it.
Tommy: Good luck finding your team, Oliver. You're gonna need them.
Oliver: Good-bye, Tommy.
(Tommy shakes his head sadly.)

Dinah: You must be a pretty big idiot, risking your life like that.
Roy: Well, we're alive, aren't we?
Dinah: You're lucky to be.
Roy: I'm surprised you even care if I made it out alive or not.
Dinah: Of course I care. You're our teammate.
Roy:  Maybe I shouldn't be. You lost everything to protect me, and you don't even know me. Those guards that I killed, they're innocent. They had families.
Dinah: What you did back there, it was awful, but we all know it was the bloodlust, Roy. That wasn't you.
Roy: No. That doesn't change the fact that I put everyone else around me at risk. You should have just let me go to prison.
Dinah: I was wrong. We all make mistakes. I was just pissed because we had just lost everything. That doesn't mean I want you dead.
Roy: Maybe it's best if I am six feet under.
Dinah: Dying is the coward's way out. Every day that you stay alive, you try to redeem yourself for that messed-up thing you did. Because this world is a better place with a hero like you. Now let's go.

Tommy: I know that you think that you have broken your father's cycle, but as long as you are giving in to your worst impulses, you are never going to be free.
Oliver: What am I supposed to do? Just tell me what I'm supposed to do!
Tommy: Lean in to the best parts of yourself Your loyalty, your selflessness, your courage, your compassion, and show that side to Emiko. You are living proof that people can change, and you have got to find a way to see that in her, too.
Oliver: I don't know if I can.
Tommy: That's okay. That's the risk you got to take.
Dinah: (in the distance) He should be in there!
Roy: (in the distance) Oliver!
Tommy: Looks like our time's up.
Oliver: You know, Tommy, I miss you every day...
Tommy: I know, but I'm always with you. It's time to wake up now.
(Cut to Oliver, still pinned under the rubble where we first saw him as the episode opened.)

Oliver sees Tommy Merlyn, while he is pinned under rubble. The position Oliver is pinned in is exactly the same as how he found Tommy in 123.

The vision of Tommy Merlyn has a beard for no apparent reason.

The Ninth Circle sent the security footage of Roy beating the two security guards to death to Sergeant Bingsley of the SCPD.

The SCPD puts out a warrant for Felicity's arrest after they determine that the Archer program was used to send the signal that triggered the Ninth Circle's biological weapon, while Emiko still had control of the program.

Felicity and Alena evade arrest thanks to Felicity's security system.

As a teenager, Oliver taught himself how to hot-wire a car practicing on Malcolm Merlyn's car. He was grounded for an entire summer because he did it three more times.

Roy offers to turn himself in for the murders of the security guards to save the rest of Team Arrow. This idea is dismissed because with a warrant out for Felicity's arrest, there's no real way to save the rest of the team from guilt by association at this point.


Roy risks his life jumping into a benzene cloud to shut off the emergency generator that risks setting the collapsing building on fire.

Emiko breaks into the Bunker and almost kills Felicity. She relents when Felicity says that she is pregnant and begs Emiko not to kill an innocent child. She still knocks out the power inside the Bunker.

Felicity worries about giving her child a normal life after how badly she failed to protect William.

Alena suggests that Felicity can take herself off the grid to protect herself and her child and that she can run Smoak Tech for her.

When the hallucination of Tommy tells Oliver how to beat Emiko, he names the four virtues that Future Dinah said made up Oliver's Pillars of Heroism in 708 - Courage, Compassion, Selflessness and Loyalty.

Everything that happened with Oliver trying to free himself is revealed to have been a hallucination. He doesn't work himself free of the rubble until the rest of the team find him.

While in the Bunker, Emiko stole several of Oliver Queen's arrows.

Team Arrow arrives on the scene to find several officers dead. They find Sergeant Bingsley, who dies just after he says the police thought they were being attacked by Team Arrow. He confirms that the Ninth Circle stole the Cygnus X-1 bomb.

Emiko escapes with the bomb just as the SCPD air support arrives.

Galaxy One starts marketing the robots that killed most of the Canary Network under the name Zeta.

Felicity wants to disable Archer remotely but someone is reworking it as she's trying to hack it.

William comes up with a plan to save the vigilantes by creating Archer blind spots like the one Keven Dale has. He will meet with him under his fake CEO identity and hack Dale's personal computers, getting the code to create the blind spots. Felicity is against the idea, but William decides to do it anyway without permission.

William and Rene Ramirez are intercepted at Galaxy One HQ.

Alena is confirmed to be the one who stole the code for Archer and weaponized it for Galaxy One.

The rest of the vigilantes are captured at the final Canary Nest.

It says a lot that the most entertaining part of the episode are the ones where Oliver is talking to himself through a hallucination. Unfortunately, there's not much drama to the rest of Team Arrow's being imperiled since we know that everyone is going to survive this thanks to the Flash Forwards. And the Flash Forwards are rather dull since 75% of them are devoted to people watching Felicity type. Still, the pieces are set for one heck of a season finale and at least there's nothing noticeably awful. Like most of Season 7 to date, it could have been so much more.