Damn near perfect.  One of the best series finales ever, not only for this show but for any show ever in the history of television shows on any planet at any time. Have Kleenex on standby while you watch it, though. 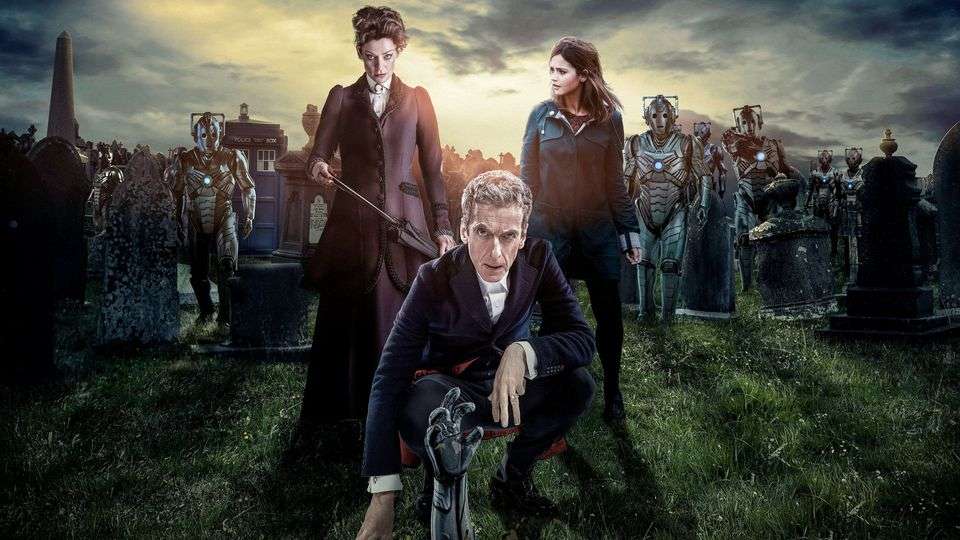 The Master is returned and building an army of Cybermen, crafted from dead humans.  But what is her game?  And how did she escape Gallifrey?  And for that matter, where in the universe is Gallifrey?!  The Doctor is desperate for answers but, as "Missy" notes, the best part about knowing is "not telling you". And even with all the resources of UNIT and a newly formed emergency world government at his command, The Doctor might not be able to save the world.

Clara Oswald has bigger concerns on her mind. Danny Pink has been converted into one of the tin men and he wants her to be the one to turn off his heart and activate his emotion inhibitor. Can Clara effectively kill the man she loves a second time, even if doing so means saving the world?

* The opening scene and change of the title credits is a brilliant fake out.  And it is a credit to Jenna Coleman's acting chops and the writers' development of Clara over the past series that you honestly do think, for just a moment, that somehow we've been thrown a curve ball and Clara has been another incarnation of The Doctor this whole time.  A female Doctor to match the Mistress.

* As in Dark Water, there's a lot of shout-outs to the classic series and UNIT in particular.

* The Doctor's hatred of soldiers is finally explained in a satisfactory manner.  It is not soldiers themselves but what soldiers represent that angers The Doctor.  Killing without question.  Obeying without thinking.  Given that most of The Doctor's greatest enemies are built around the virtue of unquestioning obedience, his attitude makes a lot of sense. But here, The Doctor realizes that for most people - and Danny Pink and The Brigadier in particular - submission to the soldier's lifestyle is born of love and a promise.  Some must fight the monsters in order for others to remain safe. And that is a sentiment The Doctor can very much agree with.

* Another brilliant Moffat conceit - mixing the traditional vision of Heaven as a city in the clouds and mixing that with the electronic cyber cloud where things are stored electronically.

* The episode is very well directed and well shot.  A particularly nice touch is depicting the Cybermen crawling out of their graves, given that The Cybermen have always basically been electronic zombies.

* My pick for the best line in the whole thing? "We are the fallen and today we shall rise! The Army of the Dead shall save the Land of the Living!"

* The ending, in which both Clara and The Doctor lie to let the other one think they've got a happy ending.

* Santa Claus himself telling The Doctor that the ending is rubbish and that they can't let things with Clara end this way.

* If you're the sort of fan who likes to have everything explained or rolls your eyes at the idea that love and a strong will can conquer all, you're going to hate this episode.  Of course if you're that sort of person, why in the name of Davros' diaper are you watching Doctor Who in the first place?

* As awesome as his appearance is, part of me is still unsure how to feel about a postmortem Brigadier Lethbridge-Stewart flying around defending the earth as an independent Cyberman.  As awesome as it is that the man could defy the Cyber-programming through sheer force of will, one wishes he'd be allowed to rest.