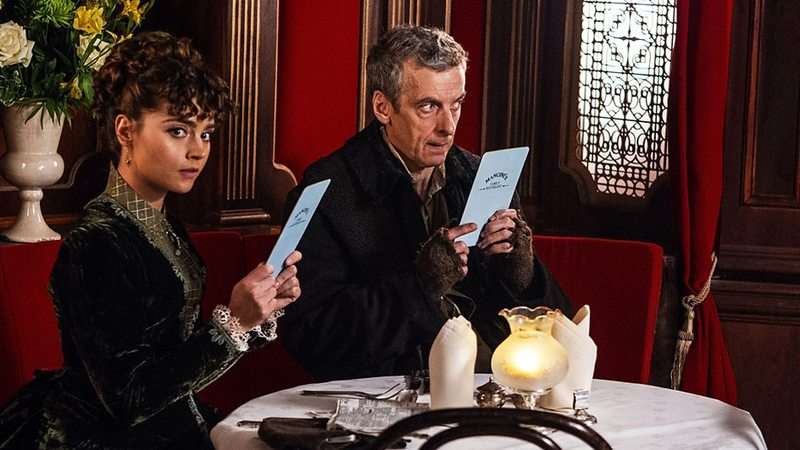 A dinosaur running loose in the streets of Victorian Era London is unusual even by the standards of The Patemoster Gang.  And a dinosaur vomiting up The TARDIS is unprecedented!  This is how Madame Vastra, Jenny and Strax are introduced to the latest incarnation of The Doctor.

As The Doctor deals with the trauma of his most recent regeneration cycle going badly, Clara Oswald finds herself struggling to cope with the idea that the manic young man she knew as The Doctor is now a depressive older man who could be her father!  But they'll have little time to rest and recover, as a series of spontaneous combustions claim the lives of several Londoners and put The Doctor on the trail of an enemy that seems oddly familiar, though he can't explain why.

* From the very first minute he appears on screen, Peter Capaldi owns the role of The Doctor.  Capaldi has a great presence as an actor and he commands the center stage like no actor since the days of Tom Baker.  Indeed, comparisons can be made between Capaldi's performance here and Baker's performance playing an equally muddled post-regeneration Doctor in Robot,  Yet favorable parallels could also be drawn to Peter Davison's performance in Castrovalva.

* Talking of the classic series, there's a lot of nods to it throughout the episode.  Most of them aren't particularly subtle (like The Doctor's dismissing the idea of a long scarf as silly) but there are a few soft touches, such as the sound-effect of The Cloister Bell from The TARDIS when The Doctor first passes out while talking to the dinosaur and Madame Vastra repeating the words of The Brigadier when The Third Doctor regenerated into The Fourth Doctor - "Here we go again."

* With one exception, Clara isn't given much to do but bandy words with The Doctor and Vastra.  That said, Jenna Coleman does a fantastic job with the banter and her telling off Madame Vastra is the first real sign we've had in a while of the spitfire Clara from The Snowmen.

* The one thing Clara does get to do apart from be sarcastic (i.e the sequence in which we see her attempting to blend in among the clockwork androids) is a truly tense and exciting scene.  I put this down more to the direction than the script but Coleman plays it well and the whole affair is well-shot.  That later interrogation scene and the resulting flashbacks also give us our first glimpse of Clara's life outside the context of saving The Doctor.  It's a bit late to try and turn her into a fully-developed character but it's still a nice touch.

* The sequence with The Eleventh Doctor begging Clara to stay with his future self is surprisingly effective.  And it seems fitting that - after all the talk in this episode of The Doctor treating Clara like a pseudo-girlfriend or her viewing him as a sort-of boyfriend - The Eleventh Doctor should call up like a drunk-dialing ex, promising that things will be okay even if they are different now.  It also serves as an effective metatextual commentary on the fans who came onto the show during Matt Smith's tenure who may be reluctant to embrace Capaldi as the new Doctor.

* Clara's drama in this episode - being unable to cope with The Doctor now being this combative older man - rings false.  Indeed, I'd go so far as to say it's complete hogwash.  Remember how she's supposed to be The Impossible Girl - the woman who scattered herself through space and time, throughout The Doctor's life, knowing every single face he ever wore including the one he tried to hide away from himself?   I ask, because Steven Moffat seems to have forgotten that point!  And yes - granting that knowing that The Doctor has worn other faces is a bit different than coping with a Time Lord in the midst of post-Regeneration birth pains - we're talking about the young woman who saw The Doctor even within the grizzled, cynical eyes of The War Doctor.  Clara should be the last person in the universe to doubt The Doctor.

* Moffat's script seems far too derivative of his previous work on the show.  Granting that he's apparently building toward something and has claimed in interviews that he's tying some of his earlier one-shot stories into the narrative for this Series, one can't help but feel that there's little originality at play here.  The clockwork robots from The Girl In The Fireplace come off as second-rate Cybermen.

* Unlike most of the other stories which introduced new Doctors, this episode is a poor introduction to Doctor Who for any newcomers who might have decided to give the show a shot with the start of the new Series.  Prior knowledge of who exactly Madame Vastra, Jenny and Strax are is rather essential to the episode's story and they're not given much introduction beyond "Grumpy dwarf", "the green one" and "the not green one".  One wonders if that is how Steven Moffat describes them in his own head.  It would explain a lot...

* Ironically, Moffat's attempt to develop Jenny and Vastra may prove to be annoying to long-time fans of the show, as said development primarily consists of continual reminders that "Yes, we are lesbians in a cross-species relationship".  Vastra, Jenny and Strax are all played like one-note parodies of themselves and the same old jokes are retold to diminished effect.

* While one can get away with slapstick in Doctor Who, one cannot get away with Hanna Barbera stock sound-effects when people are hit in the head.  The bit with Madame Vastra putting The Doctor to sleep is a mood killer.  Ditto Strax's method of taking the paper up to Clara.

The weakest introductory story for any Doctor since the series returned in 2005.  Steve Moffat's script is uncharacteristically weak, simultaneously focusing on established supporting players while giving them far too little to do as the plot slowly develops.  The only thing that saves it in the end is the performances of the cast; particularly Peter Capaldi, who manages to make the new Doctor into an engaging figure despite there being very little development of his character.  It's not a bad episode but it's unlikely to be as fondly remembered in years to come as The Christmas Invasion or The Eleventh Hour.
Posted by Starman at 9:58 PM