Doctor Who: Remembrance of the Daleks - A Book Review

Coal Hill School. 1963. About 700 years (relative time, of course) after he left it, The Doctor returns with his newest companion, Ace, to take care of some unfinished business. Before he left Earth with his granddaughter and two of her teachers, The Doctor left something behind - a powerful Time Lord artifact known as The Hand of Omega, which holds the power the power to move the stars themselves.

Such power does not exist with notice and it has, much to The Doctor's chagrin, been noticed. Two rival factions of his greatest enemies - The Daleks - are even now taking root in the area around Coal Hill School. One has taken over the school itself and its headmaster. The other has recruited the aid of a neo-Nazi businessman. Both will stop at nothing to retrieve The Hand of Omega and, with it, the secrets of controlled time travel!

Can The Doctor recover The Hand before the Daleks get their plungers on it? If so, can he stop them from destroying London and The Earth in the process?  Time will tell.  It always does. 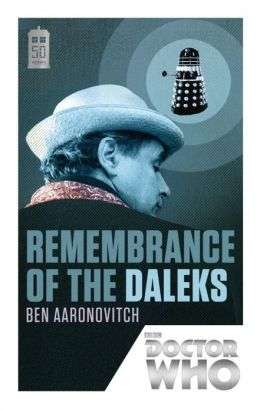 The television episode Remembrance of the Daleks is held as one of the best episodes of the Classic Doctor Who Series and is considered by many to be the best Seventh Doctor story of all.  The novelization - written by series writer Ben Aaronovitch - enjoys a similar reputation.  It was one of the first of the Target line of Doctor Who novels to be written with older readers in mind, making it a spiritual precursor to the Virgin New Adventures book-line.

As Aaronovitch notes in his introduction to this reprint edition, one can't take a television script and just add in "he said" or "she said" to turn it into a novel.  At the very least, HE couldn't do that.  Depth has been added to many of the characters in this novel version of Remembrance of the Daleks.  At the very least, they've been giving more detailing if not actual depth of character.

Perhaps the best example of this is the relationship between Ace and Mike - an army sergeant with secret ties to the neo-Nazi group aiding the Imperial faction of Daleks.  There is a hint of romance between the two characters before Mike's true colors are revealed and Ace turns on him.  Ace turning violently upon a racist is hardly surprising but the novel gives her a personal reason for loathing racists beyond culture shock.  Mike is likewise made into a more sympathetic figure, being painted not as a truly hateful man but a decent bloke who is led astray by a hate-monger, who plays on his fears of bad things happening to his friends and family.

Curiously, the only character who doesn't benefit from this increased depth is The Doctor himself.  Apart from one scene where The Doctor wonders why The Earth can't seem to go one day without it needing him to save it, we never really get into The Doctor's head at all and very little of his dialogue is offset with adjectives to describe how he says things.  This makes sense given that The Doctor's thoughts and actions for much of this episode are meant to be a mystery to everyone.  Still, this lack of perspective causes many of the best scenes in the television episode to fall flat in the novel.  Many readers will be left with a greater appreciation of how much depth Sylvester McCoy gave The Doctor through pure physicality.

My advice?  Treat this novel like the extras on a DVD.  Watch the classic episode and then read this book.
Posted by Starman at 8:15 AM