Doctor Who: Fear Of The Dark - A Book Review

The planet Akoshemon is widely regarded as the most wretched hive of scum and villainy the universe has ever produced.  Even now, generations after the planet and its people fell, it is viewed with hostility and suspicion - even by those who do not believe the old legends of an ancient evil living in the heart of the Akoshemon system.  The planet itself is a polluted wreck and its location on the edge of the universe makes it impractical for exploration.  Which makes it a prime target for Jyl Stoker and her band of mineral pirates.

Of course The Doctor has little interest in minerals or pirates.  His concern lies with a telepathic force that is attacking his companion Nyssa.  His attempts to track the assailant lead him to the moon of Akoshemon, where Stoker and her crew have just uncovered a hidden underground laboratory.  But there is more beneath the surface than old labs and strange tombs.  And in the heart of a dark world, The Doctor will have to confront more than an ancient evil beyond even his understanding - he must also confront his own fears. 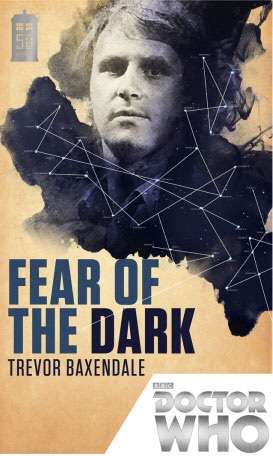 In may ways, Fear Of The Dark perfectly captures the essence of the Fifth Doctor era.  The problem is that it captured the essence of a mediocre episode of said era.  Author Trevor Baxendale has some incredibly good ideas but fails to fully realize most of them.

The base concept of the villain is a prime example of this.  The menace The Doctor faces is Lovcraftian in nature, lacking form and existing only as malevolent, possessive thought. Baxendale slowly builds the horror of the story, portraying The Doctor's out of character behavior as a result of subtle psionic manipulation.  The idea that The Doctor - never cowardly and never cruel - could be so easily turned by this menace is truly horrific.  And yet the other-worldly menace - when finally revealed after over 200 pages of subtle manipulation - monologues like The Master at his hammiest!

Another problem is the supporting cast.  Baxendale is capable of creating interesting character concepts that defy the standard cliches of science-fiction.  And yet, as soon as we feel some emotional attachment to a character, they are killed off before anything can be done with them.  Vexingly, it is the dullest characters with the least definition who survive the longest.  Some cite The Fifth Doctor's tenure as the bloodiest in the show's history in terms of supporting character deaths and this novel does little to prove them wrong.

In the end, Fear Of The Dark is not a bad story but it hasn't aged particularly well.  The Impossible Planet & The Satan Pit presented the same basic plot more effectively.  And it may be difficult for modern science-fiction readers to read about the cigar-chomping, tough-as-nails but still model-gorgeous Jyl Stoker without thinking of Katee Sackhoff.  Fifth Doctor fans will probably enjoy it but other Whovians can safely skip this one.
Posted by Starman at 1:10 PM