Doctor Who: Festival of Death - A Book Review

The G-Lock - a way-station in hyerspace notable only for being the site of a mysterious mass disappearance back in 2815.  Now, nearly 200 years later, The G-Lock is home to the galaxy's most popular theme-park ride - The Beautiful Death - which claims to offer tourists a glimpse of The Great Beyond.

None of this is of much interest to The Doctor and Romana until they find themselves in The G-Lock in the aftermath of a great disaster.  To The Doctor's delight, he is credited with having saved the population of the G-Lock from total destruction by a horde of zombies.  At least, he's delighted until it is pointed out he hasn't actually saved everyone yet and that the bureaucrat running the G-Lock has just issued a "kill-on-sight" order for a saboteur wearing a long scarf.

In order to save millions of lives, prevent the destruction of the space-time continuum and stop Ramona from giving him yet another lecture about the consequences of violating the First Law of Time (or is it The Second?), The Doctor must go back in time to a slightly earlier point and figure out what he's done.  He must then figure out how he did what he's done.  He also has to figure out how to do what he's already done without causing a paradox.

There's just one problem - once he's done that, he still has to actually do what he's already done even if it kills him.  And it will.  Confused?  So is The Doctor.  Except for the part about his imminent but heroic death. 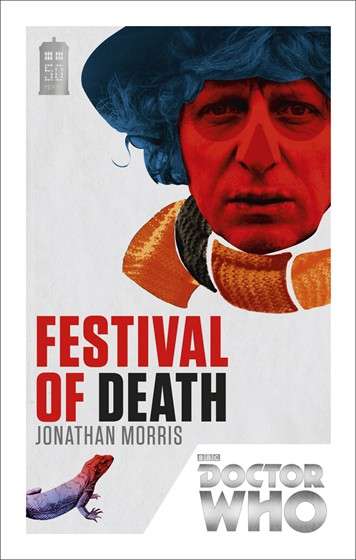 In his introduction to this reprint edition of Festival of Death, Jonathan Morris admits "a clear and obvious debt to the works of Douglas Adams"  This is a bit of an understatement.  Indeed, to say that Douglas Adams was an influence upon this book would be as great an understatement as saying that Matt Smith was an influence on the sales of bow-ties over the past three years.

There's several direct tributes to "The Guide", with a supporting cast that includes a suicidally depressed computer named Eric and a space-hippie lizard named Hoopy.  But do not make the mistake of thinking this book is a simple pastiche of the Adams' style, packed with in-jokes for the fanboys.  While Morris perfectly emulates the Adams style of humor he does it while tackling an original plot more complex than all five books in The Hitchhiker's Trilogy put together.

That being said, fans of Adams' work will notice a lot of the same themes dominate the plot of Festival of Death.  The plot centers around an Adamsesque concept - a theme-park ride through the afterlife.  As in most of Adams' fiction, the most dangerous villains are not the mad-scientists or the world-conquerors but the bureaucrats who destroy the universe a little at a time with every bad decision they make.  There's also the classic theme of technology not working properly and everything designed to be idiot-proof underestimating how very good idiots are at hastening entropy.

Morris perfectly captures the characters from the show and fans will undoubtedly hear Tom Baker and Lalla Ward bickering in their head as the story progresses.  The plot is a complex affair and was something of an anomaly when this story was first published in 2000, with The Doctor rarely indulging in "Bill and Ted" antics such as deciding to go back in time after being captured to provide the means for his escape in the present.  Modern Doctor Who fans shouldn't have any trouble keeping up.  Indeed, this novel might be a good introduction to The Fourth Doctor for fans of the New Series who have yet to be exposed to the Classic Series.

Bottom Line: If you're a fan of old Who, new Who, Douglas Adams, funny stories or stories involving Time Travel, you'll want to give Festival of Death a try.
Posted by Starman at 7:53 AM