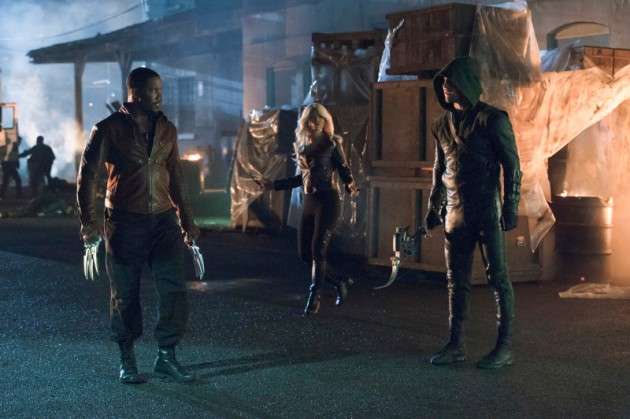 Newly committed to being the hero Starling City needs, Oliver Queen still needs a place to start his war on crime anew.  He finds his direction thanks to Roy Harper, who tells him (in the process of being bailed out by Thea after his latest run in with the law while playing Hood Junior) about the local Triad robbing the FEMA trucks that are supposed to be delivering life-saving medicines to the overburdened hospital in The Glades

Ollie tries to stop the robberies as The Hood but finds the police are more interested in capturing him than the crooks robbing the hospitals and the martial-artist muscle in their employ.  His efforts to aid the hospital directly as Oliver Queen are met with suspicion, thanks to Alderman Sebastian Blood whipping up the people and the press against him.  Ollie tries to reason with Blood and assure him that the sins of his family are not his own.  But when Ollie's double life requires him to be in two places at once - a charity fundraiser or the latest robbery - how will he choose to save his city?

On the island, Ollie fears what he's becoming because of his time on the island.  Shado tries to calm his worries but there's no time for introspection with mysterious invaders closing in.

Green Arrow: Year One (the island sequences), Green Arrow: The Longbow Hunter (Ollie's reaction to Shado being tortured is similar to his response to Black Canary being tortured in this book) and various Elliot S! Maggin Green Arrow stories (theme of Ollie wondering what good he's doing in either of his lives).

I've always found Felicity much more tolerable as a character when she's not fawning over Ollie or playing the Manic Pixie Geek Girl who is ever so delightfully quirky.  This episode turned her into Pepper Potts on speed... and I liked it!

Manu Bennett does some great non-verbal acting as Slade in the bits where he is watching Shado and Ollie.  There's clearly something bothering him and I think it's something more than simple jealousy that the one woman on the island is showing affection to the only other man besides him.

The nice dissolve shot in the new intro text, where we shift from Ollie in his street clothes to Ollie in the hooded costume, all while staring at the same arrowhead.

By the same token, the shot taken through the clear water turning red as Ollie washes his hands following his defense of Shado during the island sequence is quite striking.

Finally, there's the sequence where Sebastian Blood gives his speech about how Oliver Queen doesn't care about the city, intercut with footage of Ollie changing into his costume, retrieving his gear and riding off to stop the medicine robberies once and for all.

China White addresses Ollie as "The Emerald Archer".  This is one of Green Arrow's more popular nicknames in the comics, similar to how Superman is called The Man of Steel or Man of Tomorrow.

The muscle brought in by China White is an assassin known as The Bronze Tiger.  Originally a heroic martial artist who trained alongside Richard Dragon (of Richard Dragon, Kung Fu Fighter fame), Ben Turner was abducted and brainwashed by The League of Assassins into adopting the title and mask of The Bronze Tiger.  He eventually broke his programming and served as a "good" member of The Suicide Squad.  He is one of the few characters in the comics to have defeated Batman in a one-on-one martial arts fight.

Lots of new toys, this time around.  Ollie uses a smoke-screen to evade the police along with the Grappling Hook arrow we first saw last week.  He also makes use of a Taser Arrow against Bronze Tiger and saves Diggle from China White through what seems to be a bola-based Handcuff Arrow.

The new intro - "My name is Oliver Queen.  I spent five years on a hellish island.   I have come home with only one goal: to so save my city.  But to do so, I can't be the killer I once was.  To honor my friend's memory, I must be someone else.  I must be... something else."

Ollie's Elliot S! Magin response to Roy's disbelief that Ollie knows how he feels. - The world doesn't work anymore. It broke a long time ago but it was like you were the only one who noticed. That makes you angry. And you're afraid that anger is going to burn you up inside if you have to live in the world for one second longer knowing that you could do something to fix it.

Diggle's glib response to Felicity's complaining about her new "secret identity" as Ollie's personal assistant - Well, it could be worse.  My secret identity is his black driver.

Every moment involving Ollie, Felicity and her making coffee.

Ollie: Well, I'm just lucky that Oliver Queen has a reputation for not showing up on time.
Diggle: You know, I've been meaning to tell you it really weirds me out to no end the way you refer to yourself in the third person like that.

Blood: Crucifixion has such a bad reputation.  The Romans used it to punish people who acted against the public good.

The stone pendant Ollie gave Thea back in The Pilot makes an appearance, as Thea gives it to Roy as part of her ultimatum.  In a flashback, we discover that Ollie originally took it from the body of a dead WWII-era Japanese soldier on the island.  China White, first seen in 102, appears again leading the Triad thugs stealing from FEMA.  Roy makes reference to there being other vigilantes in The Glades besides The Hood but Laurel Lance is only interested in The Hood.  Precisely 503 people died in The Glades because of Malcolm Merlyn's earthquake machine.  First appearance of Sebastian Blood.  John and Carly broke up because Diggle felt guilty dating his brother's widow while his killer (Deadshot) still roamed free.  Laurel saw The Hood walking away from Tommy Merlyn's body sometime after the events of 123 and blames him for Tommy's death, claiming Tommy might have lived had The Hood not been busy dueling Malcolm Merlyn.  Roy has one of The Hood's arrow-shaped throwing darts, but he painted it red.  The Hood tells him to put it in the alley behind Verdant when Roy needs to contact him.  Roy is officially recruited to work for The Hood as his eyes and ears in The Glades.

This episode is amazing from start to finish.  And then it hits the cliffhanger and your mind is completely blown.  They are not pulling any punches this year.  In the words of Willy Wonka, "The suspense is terrible.  I hope it lasts!"