Reading Jeff Lemire's Trillium, I can't help but feel that I'm holding a relic from another time and place.  I had the same sensation when I read Lemire's earlier graphic novel The Underwater Welder.  As that story seemed to be a tribute to the stories Rod Serling told on The Twilight Zone and Night Gallery, Trillium reads like a lost story by Ray Bradbury or Frederik Pohl for Galaxy Magazine or Weird Tales.  I'm not enough of a classic science-fiction geek to cite any specific influences but I do believe Trillium would not be out of place among the great pulps of yesteryear. 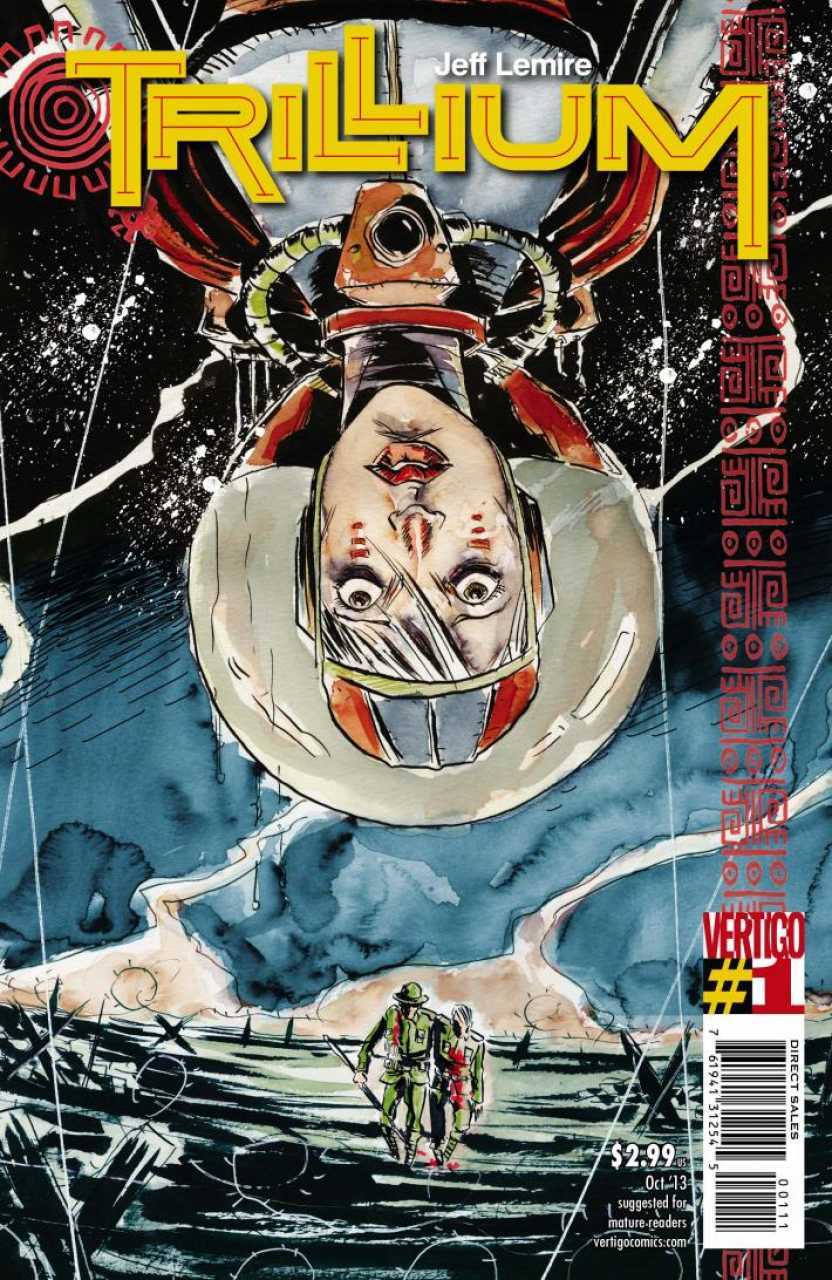 Trillium is two stories, told in two genres, across two chapters, tied together by the titular flower.  The first half  focuses on Nika - a scientist in the far future on a distant planet - who has been forced to step-up her timetable on making peaceful contact with an alien species.  The aliens control a flower that may be mankind's only hope of combating a sentient space plague that has already reduced humanity's numbers to mere thousands and Nika has been given only a few days to win the flower through negotiation before soldiers are sent in to take it.

The second chapter is set on Earth in the 1920's, where traumatized English soldier William leads an expedition in Peru.  Their goal?  Discover a lost temple which native legend claims houses a flower that grants health and happiness - perhaps even eternal life! Lemire's stories are pure pulp goodness and I'm not talking about orange juice!  Both stories stand well on their own merits and would serve as fine examples of genre writing were they to stand alone.  Put together, they promise an interesting tale to be told in the upcoming issues as the worlds and concerns of our two heroes collide.

Readers who only know Lemire from his writing for various DC Comics projects may be astonished to discover he is as versatile an artist as he is a writer  Lemire depicts the desert wastes of a desolate world within viewing range of a black hole as skillfully as he does the jungles of the Amazon.  His characters are distinctive and his visuals memorable. Bottom Line: This is a damn good book and I'll be picking up the rest of the series.  If you're a fan of classic science fiction and adventure pulps or Lemire's work on Green Arrow and Animal Man, you should definitely give Trillium a try.
Posted by Starman at 8:30 AM