Star Trek: Into Darkness - A Review

Star Trek: Into Darkness is a standard popcorn movie - enjoyable, if a bit shallow.  The ensemble cast is all-around excellent, though the script leaves most of them with little to do as the movie progresses and there's little exploration of the relationships between most of the major players.  Still, apart from some blatant fan-service and a few cheesy bits that try a little too hard to appeal to long-time fans of the franchise, there's little to actively dislike about this movie. Demoted after a major violation of The Prime Directive not to interfere with less-developed cultures. James Kirk finds himself quickly re-promoted to chase after the fugitive John Harrison - a terrorist waging a one-man war against The Federation, who has taken refuge on the Klingon home world.  It's an assignment that Kirk's all too eager to accept, as Harrison is responsible for the death of his mentor, Captain Pike.  Yet there is much about the assignment that troubles the Enterprise crew, from the orders to assassinate a criminal rather than bringing him to trial to the mysterious experimental torpedoes they've been equipped with.  There's also the question of what caused John Harrison to turn on The Federation in the first place and what secrets he may yet know... 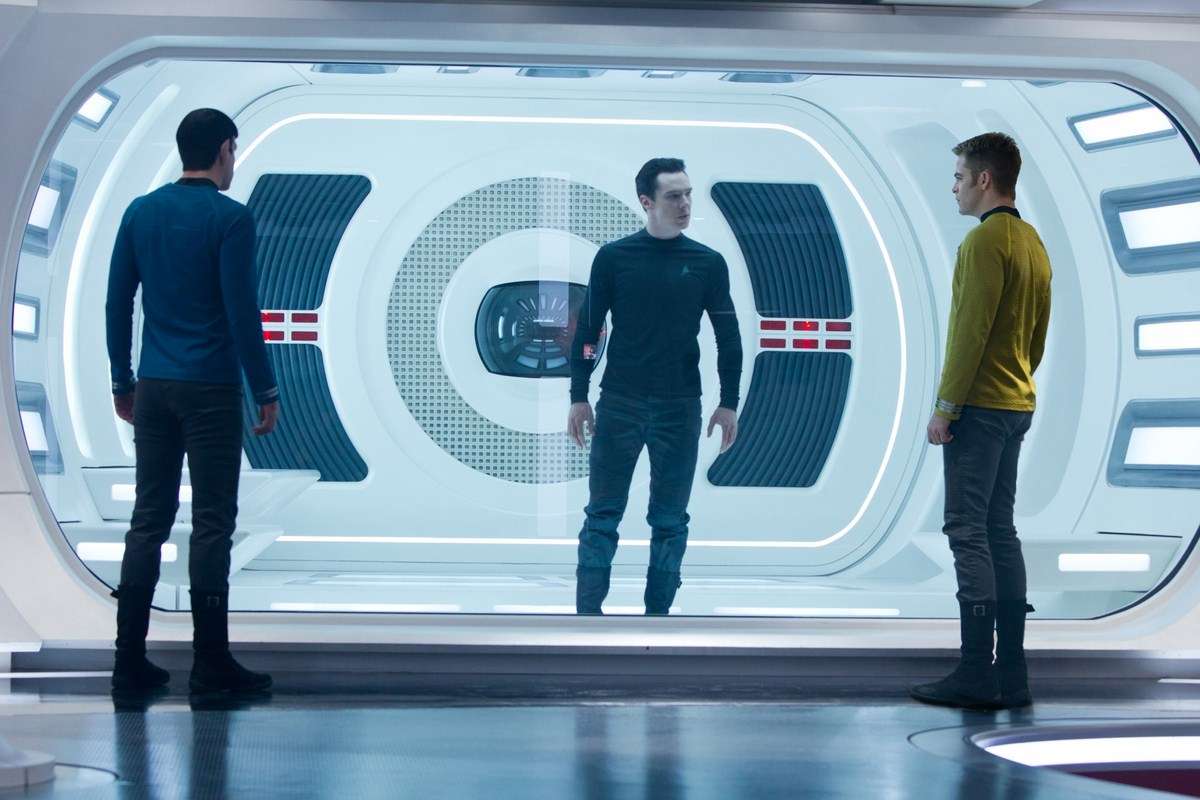 * The cast is top-notch.  I can't think of a bad performance in the lot.

* Of particular note is Zachary Quinto as Spock (who does a fine job subtly playing the conflict between the human emotions and Vulcan upbringing of the character), Simon Pegg as Scotty (who manages to be convincing as both the comic relief AND the super genius who saves everyone) and Zoe Saldana, who plays Uhura as a tough, competent and no-nonsense officer.

*Benedict Cumberbatch proves a most effective Khan.  I know there's been some protest about Cumberatch's casting, given Khan's status as one of the most prominent minority characters in the last 50 years of science fiction.  The irony of this is that the original show undercut the potentially dodgy issues of discussing eugenics by making the genetic superman villain a man of vaguely Asian heritage and casting a Latino actor to play him.  This film dodges the issue completely, referring to the purpose behind Khan's creation in only the vaguest terms possible while still affirming his status as a super-soldier created for some unspecified war in the past.

* The action of the movie is well-paced and well-shot.

* The special effects are all great.

* There's quite a few clever jokes for the long-time Trek fans.  My favorite involved the few seconds of worry crossing Chekov's face as he is given a potentially dangerous assignment and instructed to change into a red shirt. 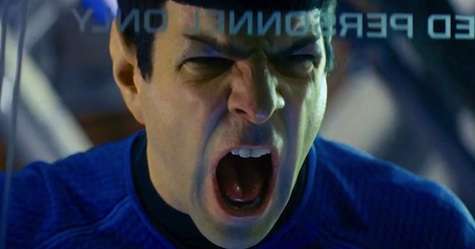 * I think Zachary Quinto is a fine actor, but his yelling of "KHAAAAAN!" was just ridiculous.

* The script suffers from the same problems as the 2005 The Hitch-Hiker's Guide to the Galaxy movie - there's a lot of in-jokes for the fans of the franchise but many of them don't make sense within the context of the universe and any die-hard fan who gets the joke will be unwilling to ignore the inaccuracy for the sake of the joke.  For instance, In Hitch-Hiker's Guide, the movie showed Ford desperately looking for a towel in the wreckage of Arthur's house and later using said towel in a variety of ways and yet the importance of towels in Hitch-Hiker culture is never explained.  Similarly, we see Dr. McCoy - using a dead Tribble (a fictional animal in the Star Trek universe known for being born pregnant and reproducing like rabbits) as a test-subject in his lab - a point that I heard had many Trek fans livid given the volatile nature of the species.

* While the cast does the best it does with what they're given, the script gives some members of the cast more to work with than others.  Karl Urban in particularly is criminally underused as Dr. McCoy and Sulu is confined to the bridge of the Enterprise with little to do save give one impressive speech.

* On that note, there's little exploration of the relationships between most of the characters.  Most of the focus is firmly upon the Kirk/Spock bromance, with Spock and Uhura's relationship getting a little bit of discussion but no resolution.

* The sexism in the script, unintentionally as it may have been, is still noticeable.  It runs even deeper than the now infamous and pointless (by admission of the writer) scene of Carol Marcus stripping down in the same room as Kirk - a scene made worse by the conversation leading into it, in which Carol confronts Kirk about his womanizing ways and his treatment of a friend of hers.  What real woman is going to risk taking her clothes off in a room with a man like that and trust him not to peek?

* Case in point, re: sexism.  Carol Marcus is supposed to be a weapons expert.  Granting that she's more of a designer than a soldier, you'd still expect her to be somewhat capable in a fight, particularly coming from a military family.  Explain to me then why she spends most of the combat scenes sitting on the floor and gasping in shock like she's auditioning to be the model for a pulp sci-fi cover?  Hell, even three of the four images on Google Images when you search for Carol Marcus depict either Alice Eve in her underwear or Alice Eve screaming in terror.

* Even Uhrua is not immune from this, I fear.  She insists on being allowed to *gasp* do her damn job as a communications expert and try and talk to a group of Klingons, appealing to their sense of honor.  Is this a powerful scene?  Yes.  Does it make Uhrua look tough and capable?  Yes.  Is this completely undercut by her needing to be saved by the men when it doesn't work?  A wee little bit, yes.  It also doesn't help that her major character motivation, when you get right down to it, is wanting to get her boyfriend to open up more about his emotions.

*The biggest problem in the script is that we've seen this all before.  Literally, all of the best dramatic moments in this movie were taken from The Wrath of Khan.  While Chris Pine and Zachary Quinto prove capable of putting a unique spin on the material - the tragedy now that of a young man dying before seeing his full potential and Spock confronting his own newly realized fear of death - it still feels like we're getting J.J. Abrams' rendition of The Best of Trek, Volume 2.

* So... genetically altered super-soldier blood is a magic cure all for radiation poisoning as well as whatever that little girl at the beginning had?  Kinda puts a darker spin on Khan being "put back to sleep" along with the rest of his people.  For all we know, The Federation may be shipping them off to a blood bank and start slowly sucking them all dry. 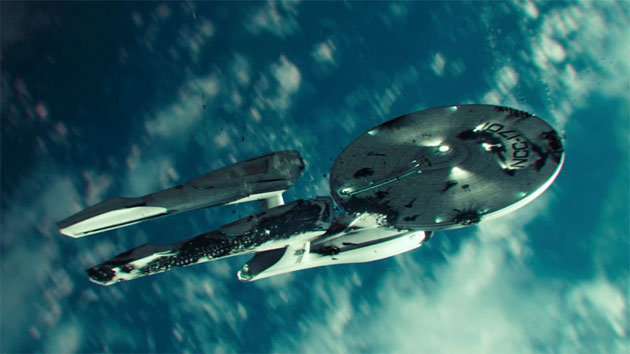 I'm conflicted.  Upon first viewing, I generally enjoyed the film while being troubled by some of the blatant sexism and the shallowness of the script.  On further reflection, I'm more troubled by how poorly the ensemble cast was utilized and some rather large plot holes.  Still, I've had quite a few good conversations as a result of this movie and that, ultimately, made it worth the viewing.  Go see it with a group of friends - preferably a mix of Trekkers and non-fans - and then get ready for some spirited discussion over a Romulan Ale afterward.