Be warned fans of the She-Devil of Hyrkania - this is not a Red Sonja tale.  Red Sonja stories feature a strong, bold woman standing up against monsters, both human and inhuman, striking a blow against all who would oppress the innocent and enslave the weak.  This comic centers around a hapless victim, who could be replaced with a house plant without the plot having to be changed one iota.  But I'm getting ahead of myself... 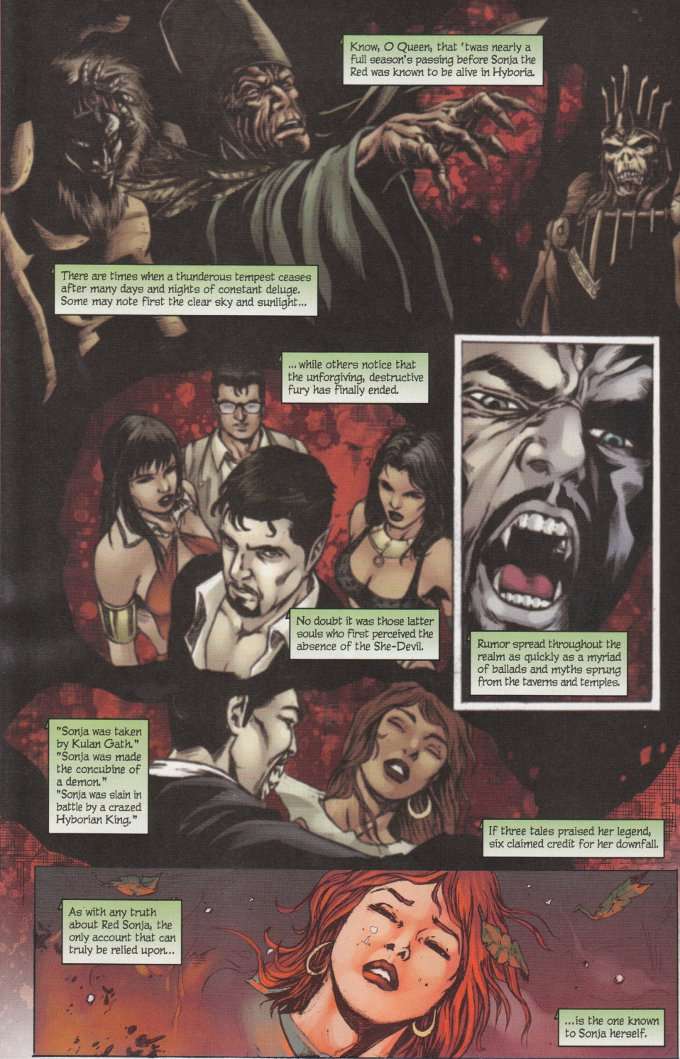 Apparently this story is meant to take place immediately after the events of a crossover mini-series called Prophecy, which I did not read.  I didn't find this out until I sat down to write this review and saw the credits page, where there is a note mentioning that fact.  It would have been nice if there had been a Stan-Lee style text box ("AS SEEN IN PROPHECY #6, TRUE BELIEVER! - SMILING STAN") telling people that somewhere in the actual comic.

As it is, the only reference to Prophecy in the actual book is a one-page montage that does little to clarify matters.  The text talks about the rumors of what happened to Sonja while she was disappeared from the world but doesn't tell the reader what actually happened.  The artwork depicts several characters (the only one of whom I can identify is Vamperella) whom I assume were also in Prophecy, but does nothing to name them either. This page of exposition comes after an opening prologue that has nothing to do with the rest of the action of the book.  Things truly start with Sonja waking up tied to a stake with a fire at her heels.  She breaks free easily enough and is confused when the townsfolk who were burning her seem terrified of her.  She is then rescued from the lynch mob by a group of mysterious men on horseback.

I will repeat that again, because I think it's rather important - Red Sonja has to be saved from a lynch mob of peasants by a group of mysterious men on horseback

It gets worse.  The only reason these men saved Sonja was because they somehow know more about current events than the oddly amnesic Sonja.  Apparently Sonja has been turned into a vampire of some fashion and it is the hunter's intent to use her to curry favor with another prominent hunter and use her as bait for the vampire lord who created her, who naturally wants Sonja as his eternal bride.

It's at this point that I must take artist Sergio Fernandez Davila to task.  Davila is a far more competent artist than his predecessor Marcio Abreu, but, sadly, that competence has been turned toward cheesecake.  Sonja is unnaturally posed throughout and the most prominent splashes in the comic involve her being in some form of bondage.  Ignoring that, there are instances of certain characters and objects being over-outlined or under-inked - sometimes on the same page!

This comic is terrible on every front.  Perhaps it makes more sense if you've read Prophecy but I doubt it.  In any event, it would have been better off being directly marketed as a sequel-series rather than published as part of the regular Red Sonja monthly book.  When a long-time reader like myself is unable to follow the story without going on-line, you have a problem.  When your Red Sonja storyline features Sonja  being treated as an object to be used rather than a bold heroine, you have many problems.  And when your artist seems more interested in drawing women in bondage than women in battle, you have a whole mess of problems.  And the largest of these problems is this - this doesn't feel like a Red Sonja story and it's not any kind of Red Sonja story I want to read.
Posted by Starman at 4:35 PM