Another episode that would have been much improved by being a two-parter and I'm not just saying that because more of Neil Gaiman's writing is always a good thing.  There's a lot of good ideas here but very few of them are fully carried out.  Still, Gaiman does succeed in his goal of upgrading The Cybermen into a credible menace.  Not as good as The Doctor's Wife but not a bad episode at all. 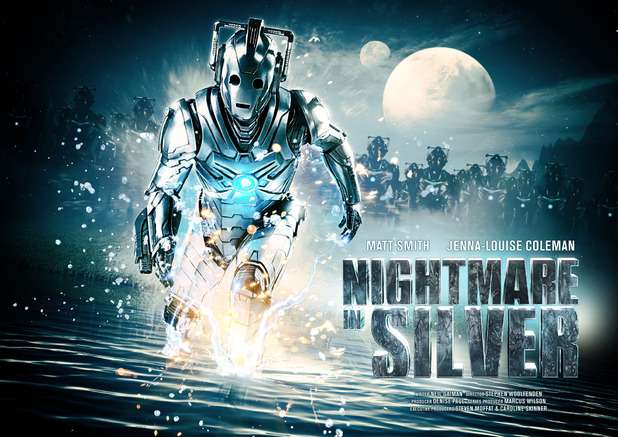 Apparently blackmailed into taking Clara's two charges along with them on their next trip, The Doctor plans a journey to Hedgewick’s World of Wonders- the galaxy's finest fun fair!  Of course we all know The TARDIS tends to have trouble getting The Doctor when or where he wants to be, even when it isn't taking him where he needs to be.  So it's no surprise that the company arrive at Hedgewick’s World of Wonders sometime past its' heyday.

The larger part of the amusement park is run down and guarded over by a suicide squad of soldiers with orders to blow up the planet at the first sign of invasion.  The only attractions left open are a shabby museum of wax figures and a chess-playing dwarf named Porridge, who pretends to be a chess-playing Cyberman.  But there is much in the World of Wonders that is not what it seems to be and even now a sleeping evil is stirring...

* In the publicity leading up to this episode, Neil Gaiman said his ultimate goal with this story was to make The Cybermen scary again.  I dare say he was successful.  Even if The Cybermen aren't scary, it can't be denied they're still far more effective as villains now than they've been at any point in the New Series.

* One way the Cybermen are more effective - Gaiman makes the logical leap (and it's a wonder nobody thought of this before) that if The Cyberman's motivating factor is to upgrade themselves beyond the limits of their fleshy human bodies, that they should be able to upgrade themselves a good deal faster through the network that connects all Cybermen.  Sick of that annoying gold allergy clogging your respiratory system?  There's an app for that.

* Another upgrade to The Cybermen - the Cybermites.  Miniaturized Cybermats - insect sized and capable of altering non-humanoid organics.  As human technology became smaller and more efficient, it only makes sense for the Cybermen of the future to be looking into miniaturizing their tech as well.

* Matt Smith does a fantastic job in this episode, playing the dual roles of The Doctor and Mr. Clever.  Or whatever name the new Cyber Planner ultimately decided on.  Smith sells the idea of a Time Lord's intelligence and The Doctor's own erratic nature melding with the cool efficiency of a Cyberman's brain stunningly well, making that concept the most unsettling aspect of this episode and that is saying something!

* Another Classic Series nod - the quick mention of the Tomb of the Cybermen and The Moonbase.

* Lots of great interplay between The Doctor and Clara.  Lots of good dialogue in general, really.

* For the first time since The Snowmen, Clara actually seems to be as awesome as we're told she is.  Maybe its' her charges being endangered that brings out the badass Mary Poppins?

* Warwick Davis, always a delight, has a brief but nice part as the carnie Porridge.  The scene with Clara where he ponders the hole in the night sky where a thriving galaxy used to be is the most emotionally honest moment in the whole episode.

* Clara's charges are still incredibly annoying and stupid.  I know Gaiman is paying tribute to Roald Dahl somewhat but was it really necessary to bring back Verruca Salt and Mike Tevee back in the form of Angie and Artie?  At least they spend most of the episode standing around silently and are easily bought off telling their dad about how they were nearly killed while time-traveling by giving them new phones.

* While Gaiman has made the Cybermen into a credible threat, the episode still has them largely falling back into the same old rut with no explanation.  For instance, the sudden burst of Matrix-style "bullet-time" speed, allowing one Cyberman to snatch a child out of the middle of a crowd is terrifying.  So if the Cybermen are capable of that kind of speed, even only in short bursts, why are still shuffling around slowly, in formation, as per usual for most of the episode?

* On a similar note, consider the new Cybermites.  They are terrifying and well-utilized but one wonders why the frell The Cybermen bother with that big clunky robot design when they have tiny electric insects that are capable of moving unnoticed and infecting a populace in a far more subtle manner than by sending armies of clockwork men around to touch everyone.

* Granting that Doctor Who has never had the best record when it comes to depicting the military in a positive light, The Imperial Army prove that old adage about military intelligence being an oxymoron.  Actually, the rank and file soldiers seem to be okay but one has to wonder about the top brass.  The punishment platoons seem to be woefully under-armed, even allowing that they're supposed to be on a suicide mission to blow up whole planets.  And whose bright idea was it to send soldiers who didn't follow orders out on missions where the fate of the human race was potentially dependent upon their following orders?

* Thematically, this episode is all over the place.  As in most Cybermen stories, The Doctor's victory comes out of his ability to out-think The Cybermen, either by turning their own logic against them or by besting them with his own illogical behavior.  Likewise, the lives of everyone involved are ultimately saved only because of the soldiers who choose not to mindlessly obey their orders to blow up the planet - i.e. not acting like Cybermen.  And of course the day is saved by The Emperor who is only there to save everyone because he defied the order of his own empire.  Yet most of the problems with the episode are caused by a pair of children who cannot follow basic instructions and Clara cites herself as someone to listen to because she is someone who has survived by doing precisely what The Doctor tells her to do.

* While Clara does come off better in this episode than anything since The Snowmen, her portrayal in this episode does seem at odds with what we've seen of her throughout this season.  Is this short, bossy girl with the funny nose who has a better head for strategy than the career soldiers really the same woman who had trouble looking an Ice Warrior in the eyes?  At this point, my new theory for Clara's background is that she's a long-lost Time Lady called The Nanny.

An uneven but ultimately entertaining episode that manages to make The Cybermen menacing again but accomplishes little else.  Warwick Davis is criminally under-utilized and the best bits of the episode involve Matt Smith talking to himself.  Still, the special effects are good and there's a lot of fun dialogue and enough action to keep things from being boring.  Not quite the instant classic we'd hoped for with Neil Gaiman writing but not bad at all.