Had I been fully paying attention when I picked up my most recent haul of comics this past weekend, I probably would have skipped this particular issue of Doctor Who.  Why?  Because had I looked at the cover for longer than a second, I might have noticed before I got home that this issue was written by Joshua Hale Fialkov.  The same man whose Casablanca-themed story "As Time Goes By" drove me off this title last year.  But I picked it up.  I read it.  And generally I liked it. 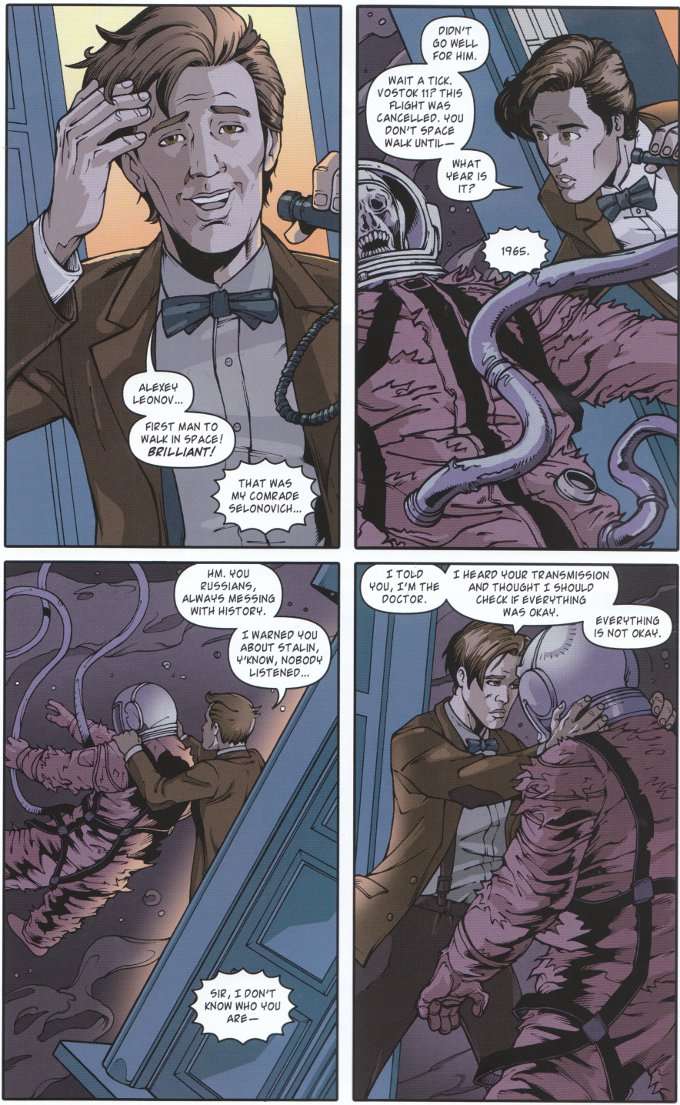 The plot of the issue has The Doctor - currently traveling solo - answering the distress call of a 1960s Cosmonaut spaceship.  He's arrived several seconds too late to save the first man to successfully attempt a space-walk from an encounter with the Vashta Nerada - the flesh-consuming shadows from Silence In The Library. Complicating matters is the fact that the other Cosmonaut on board the failing ship is Alexey Leonov - the man whom history records as being the first man to walk in space... on a later trip.

Fialkov's take on The Doctor continues to bother me somewhat, being the same idiot man-child Matt Smith occasionally - but not always - plays at being.  A bigger problem is the portrayal of the TARDIS.  And yes, the TARDIS is an active player in this issue.

The main drama of the issue comes from The TARDIS sealing itself off, without instruction, leaving The Doctor and Leonov trapped on the Russian ship with a limited amount of power and life-support.  This troubles me somewhat as this sealing happened when the Doctor and Leonov were two seconds away from entering the TARDIS.  This leaves the main drama of the issue seeming incredibly forced.  I will credit Fialkov with having a unique storyline this time and in breaking with the usual British-centered view of Doctor Who to explore the reality of a real-life historical figure who has been largely ignored by Western historians. 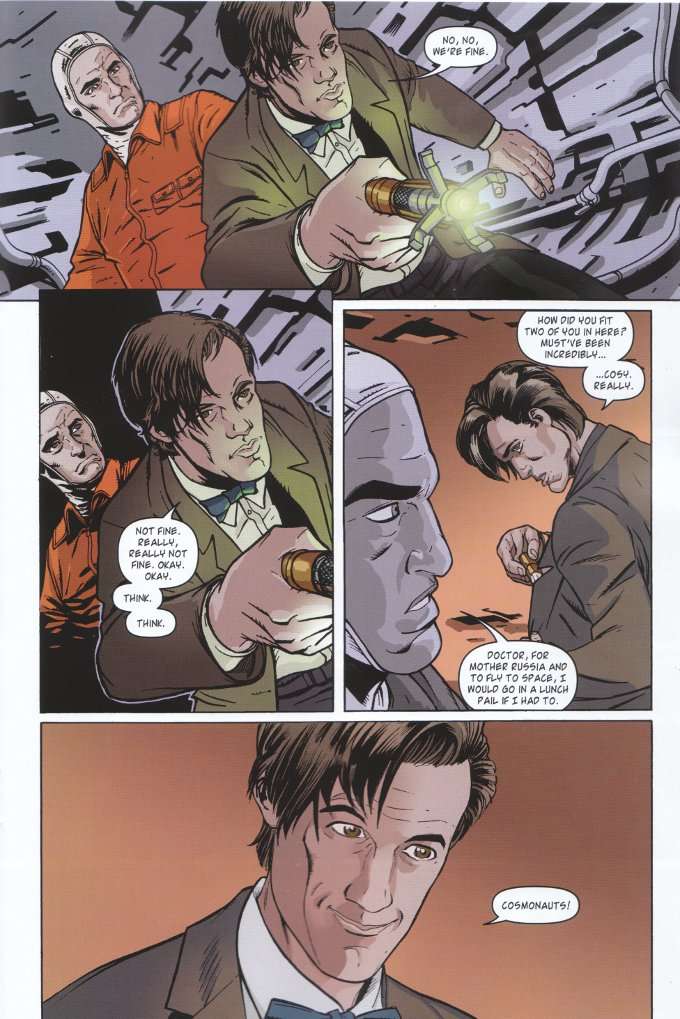 While I may quibble about Fialkov's take on The Doctor, I have no complaints about the artwork.  Reminsicent of Mike Allred though somewhat more photo-realistic, Horacio Domingues and Andres Ponce do a fine job of depicting the action and caricaturing The Doctor with their pencils.  Inker Ruben Gonzales keeps the shadows mercifully thin throughout most of the book, adding to the horror once the darkness does become apparent.

All in all, this isn't a bad issue to pick-up if you're a Doctor Who fan looking for further adventures in print form.  The artwork is enjoyable and the story is well-paced despite whatever issues I may have with how goofy The Doctor is written and the forced-drama of the TARDIS sealing itself against "its' thief".
Posted by Starman at 9:38 PM