Doctor Who, Series 7 - Episode 6 - The Bells Of Saint John

Amazing visuals and some stellar acting on the part of Matt Smith and Jenna Louise-Coleman can't quite hide the fact that we've seen this all before.  It's not bad but it's unoriginal and lifeless and the anti-technology menace seems at odds with the central themes of Doctor Who. 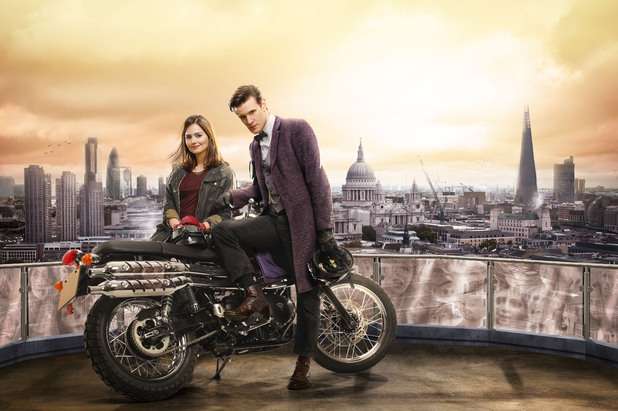 Having retired to a quiet place (a 13th century monastery) to consider the problem of The Girl Who Died Twice, The Doctor is surprised when she calls him on the TARDIS's exterior phone looking for technical support.  Tracking her across time to modern London, The Doctor arrives in the nick of time to save her from a "Spoonhead" - a self-camouflaging robot that is using public wi-fi signals to trap people's minds in the computers of a mysterious company working for an even more mysterious client.

* While I'm sure at least one Doctor Who novel has gone into the subject before, this is the first television story I think has gotten into the sub-genre of Ghost In The Machine/William Gibson-style cyberpunk science-fiction and it's interesting to see those tropes applied to the Doctor Who universe.

* Nice nod to the classic series with The Doctor being known as "The Mad Monk" to the monks he is guesting with in this episode.

* New Mystery - who is the woman in the shop who gave Clara the phone number for the TARDIS?  River Song is the obvious answer but I suspect it's TOO obvious.

* "...human souls, trapped like flies in the World Wide Web..." - great line, at least until the crack about Twitter users.  (Incidentally, expect a day or so of Whovians tweeting "I don't know where I am.  Help me." on their Twitter feeds.)

* The whole sequence where The Doctor flees into the TARDIS pulling Clara after him, coffee cup still in her hand, and then into the aisle of an airplane that's about to crash... all seemingly in one long take... is gloriously laid out.

* Blatant Lies from The Doctor - "I don't take the TARDIS into battle!  I don't want it falling into the wrong hands."  Except for all those times you did.  And apart from that one time with The Master, it hasn't.

* Matt Smith as The Doctor seems much more confident, more serious, less weirdly alien for the sake of being an alien.  And then he goes and licks something he finds pressed between the pages of a book.  Brilliant!

* Jenna-Louise Coleman is as wonderfully charming as in her first two appearances.  Still a bit early to judge but I do like her giving The Doctor a hard time as no one has since Donna Noble.  ("Down boy.")

* Modern Setting aside, this story is basically the same story as The Idiot's Lantern - technology being used by an alien intelligence to steal "souls".  Come to think of it, that episode also featured The Doctor tooling around London on a motorbike and weird faceless people as the main "monster"

* While this may not be/probably isn't quite her first outing as a companion, Clara really isn't all that useful as a companion in this, her first outing in this particular incarnation.  True, she's able to use newly acquired hacking skills to track down the villains but since those skills don't really belong to the real "her", it seems sort of false to have that be her main contribution to the story apart from being a plot device of interest to The Doctor.

* Traditionally, Doctor Who has always been pro-science and futurist.  And yet the theme of this episode is primarily built upon the most anti-futurist message in science-fiction - i.e. technology will steal your soul.  I believe this is why the story of this episode and the menace of soul-drinking wi-fi just seemed more odd than frightening to me.

* On that note, I can't help but wonder how much of this episode and it's negative view toward social media was inspired by Steven Moffat's rather violent departure from social media in any form.

* Two odd things about UNIT at the end.  First, they appear to be back to being mostly a military group in spite of what we were told back in The Power of Three about them having progressed into becoming a more science-based organization.  Next, nobody seems to have heard of UNIT when they storm the building - even before all the workers under Miss Kislet have their memories erased.  I thought UNIT was acting openly in the modern day?


I'm reminded of a line I heard attributed to Oscar Wilde - "There is much to admire here but on close examination I find that everything admirable has been imported from elsewhere."  This is hardly the worst episode ever made but it isn't original by any means.  The basic theme of the episode - that technology will steal our humanity - is hardly a new one to Doctor Who, even if Moffatt fills the script with stabs at Twitter users and references to smart phones and Wi-Fi.  Yet the fearful take on modern technology being turned upon us as depicted here seems to violate much of the spirit of Doctor Who which has always depicted our current advances in a positive light.  Still, there are some magical moments here that are quite enjoyable and the Third Doctor fan in me got a thrill at Matt Smith riding a suped-up motorbike.  Here's hoping we hear it called Bessie Too at some point.   It's worth watching but I doubt this will be anyone's favorite episode ever.