Conan The Barbarian #14 - A Review

Robert E. Howard has been written off by many fantasy fans as a sexist author.  I personally find this to be an unfair consideration but I understand it given how many of the original Conan stories featured women in peril and everyone's favorite burly barbarian slaying the monster, saving the girl and then 'saving her' again several times that night, if you know what I mean and I think you do.  (Thanks Joe Bob Briggs!)  While many of Howard's personal views are undeniably backward by modern standards, his views on the fairer sex and gender equality are less clear.

The original Conan stories do possess many sexist elements but that may have stemmed less from Howard's personal beliefs and more from his catering to the fetishes of his editor at Weird Tales.  Sex Sells and with The Great Depression in full-swing, Howard literally could not afford to stand on principle - hence all the slavegirls in bondage.  And yet, Howard's most memorable female characters - and the ones for whom he seemed to have the greatest personal affection - were the women warriors like the pirate Queen of the Black Coast, Belit, who refused to bow down to anyone or meekly accept society's expectations. 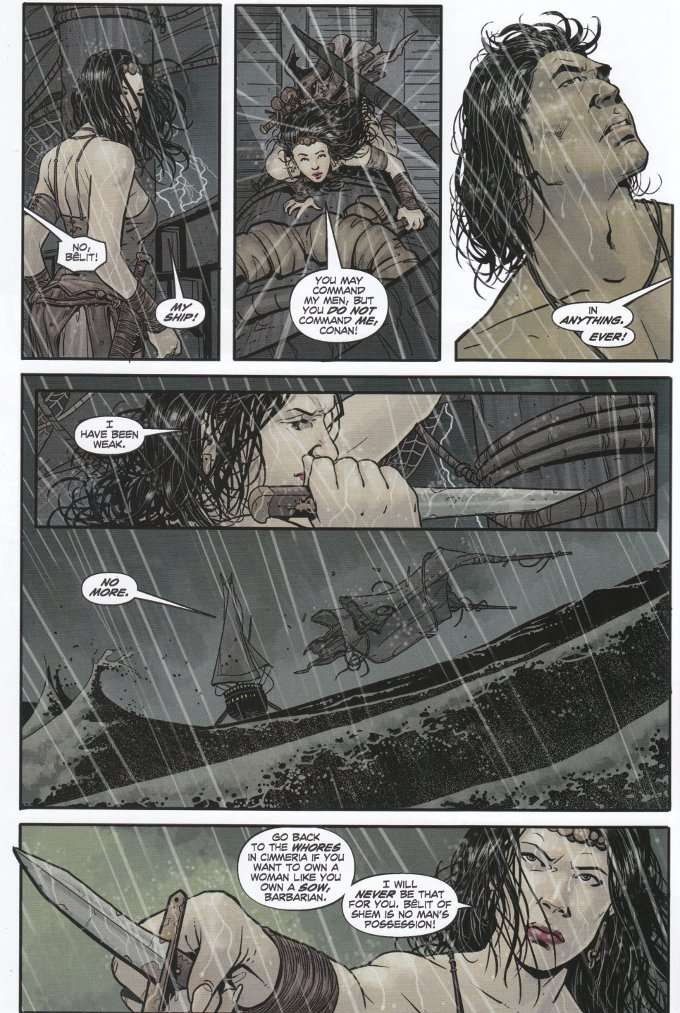 Howard's personal letters also point to a different sort of man than the one suggested by some of his fictional writings.  Here we find a man who, while defying all but the broadest definitions of a feminist male, could be said to have a chivalric or romanticized view of women without a hint of misogyny.  He wrote that he dreamed of one-day being able to write and sell a "Conan yarn without sex interest." and indeed did so with the posthumously published Beyond The Black River. And in one personal letter Howard chided a friend for his own attitudes about women's influence on Western Civilization and named a number of great historical women (Joan of Arc, Catherine the Great and Sappho among them) in proving his point that there were many great female leaders, poets and philosophers.

I mention all this because the script for Conan the Barbarian #14 by Brian Wood is very much in line with Howard as he wrote Belit, yet she barely figures into the action of the story at all.  After a flashback where Conan remembers the active warrior Belit he chased into the Shemish desert. he confronts the strange new reality of a Belit who passively watches battle from the ramparts of a besieged city.  Forcibly conscripted into the opposing army, Conan quickly grows tired of waiting and hearing his fellow soldiers discuss the mysterious woman on the wall.  He plots to invade the city with a small group to break the siege.  Here we see the early signs of a Conan who will one day become a captain of mercenaries and eventually a general and king on the battlefield. 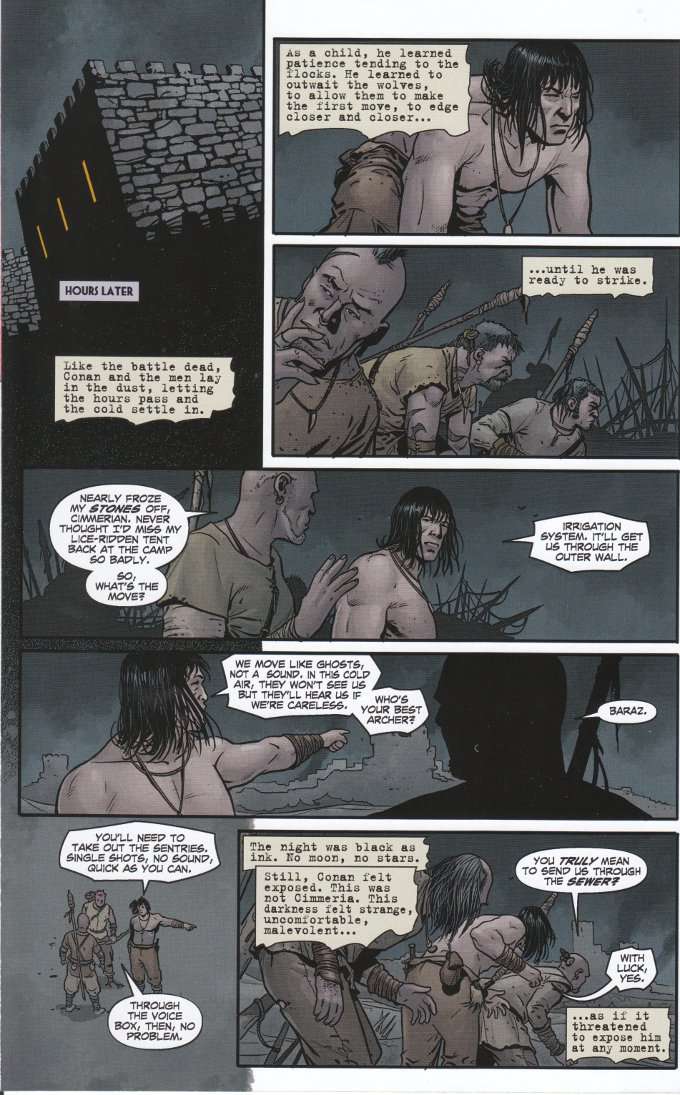 The artwork of Mirko Colak continues to amaze.  There is a clarity to Colak's pencils that is as simple and powerful as Cimmeria's favorite son.  The palette chosen by colorist Dave Stewart also deserves praise, for perfectly capturing the muted shades of a city and military camp at night.

All in all, this issue is worthy of Robert E. Howard's legacy.  The artwork perfectly depicts the excitement of combat and the mystery of a covert mission.  The script provides plentiful action and intrigue.  There's even a curious twist near the end that will leave the readers anxious for the next issue.