Power of The Valkyrie, Part One

Let me tell you the tale of a company.  A company best known for producing low-quality garbage as quickly as possible in a desperate bid for relevancy.  A company renowned for shady businesses practices that would make Max Bialystock blush.  A company that today, made the news for their attempts to peddle a digital comic with four "collectible" covers, neatly ignoring that it's impossible to truly have collectible digital comics in the traditional sense since they cannot be resold.  I speak of the wretched hive of scum and villainy known as Bluewater Productions.

By the request of several friends who alternatively begged, pleaded and threatened me over the past day, I will not be reviewing the comic in question.  I will, however, be conducting a more in-depth review of a comic series I reviewed previously for No Flying No Tights.  An "original series" by Bluewater Productions that isn't very original and - at four issues - isn't really a series.   A series called Power of the Valkyrie.

Why?  Because it is not enough for me to tell you all of the evils of Bluewater Productions.  Like children playing with matches, you must be burned to truly understand the fire.

Our story opens in a hospital emergency room, as our heroine Susan (no last name given) is storming out in a huff.  She's just lost her first patient and is not taking it at all well.  She's in the middle of talking to herself about how lazy and incompetent her co-workers are when she helpfully tells us that the hospital director just walked in.  Get used to this "tell vs. show" dialogue, folks.  We'll be seeing a lot more of it. 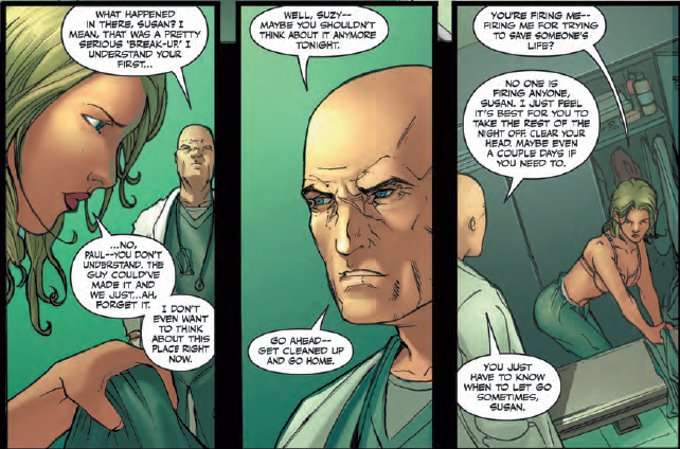 A quick note about the artwork for this book.  It's crap on nearly every conceivable level.  The whole series is full of continuity errors in the character designs, coloring mistakes and bad perspective.  Check out the above panel and how we can see the top of the locker room bench in the third panel and the angle of Susan's body and the lockers behind her relative to it.  And that's ignoring the bent-over porn-starlet pose Susan has taken for no readily apparent reason.  Really, the only nice things I can say about the art are that the lettering on the word balloons is readable and the inking highlights the pencils decently enough. 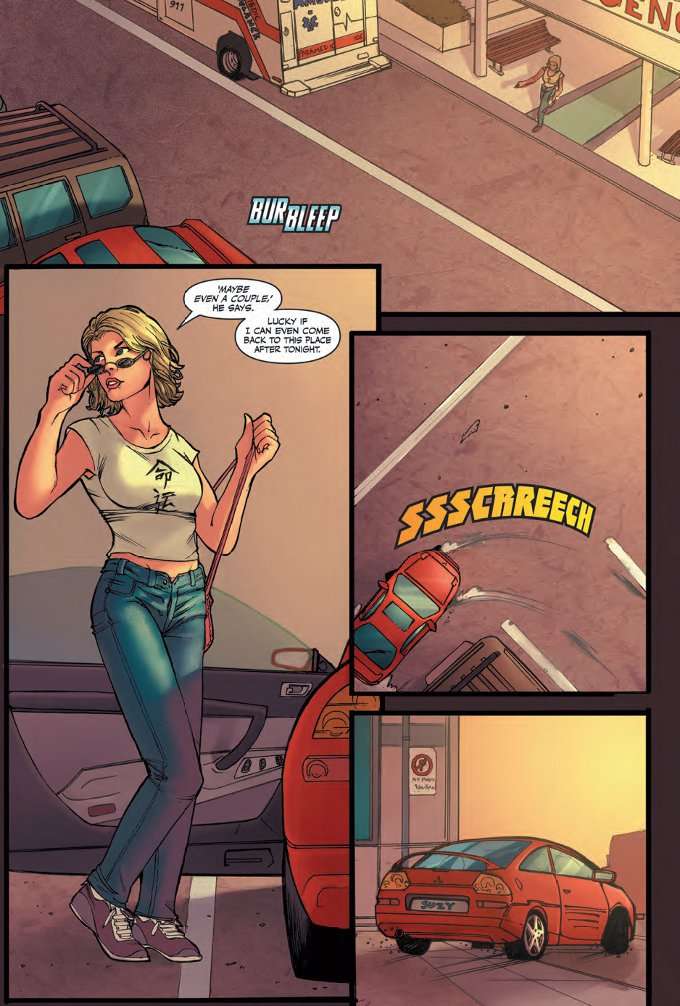 More upset by the apparent indifference of her co-workers to people dying than by her male director coming into the women's locker room while she's half-naked, Susan speeds off into the sunset and talks to herself some more. 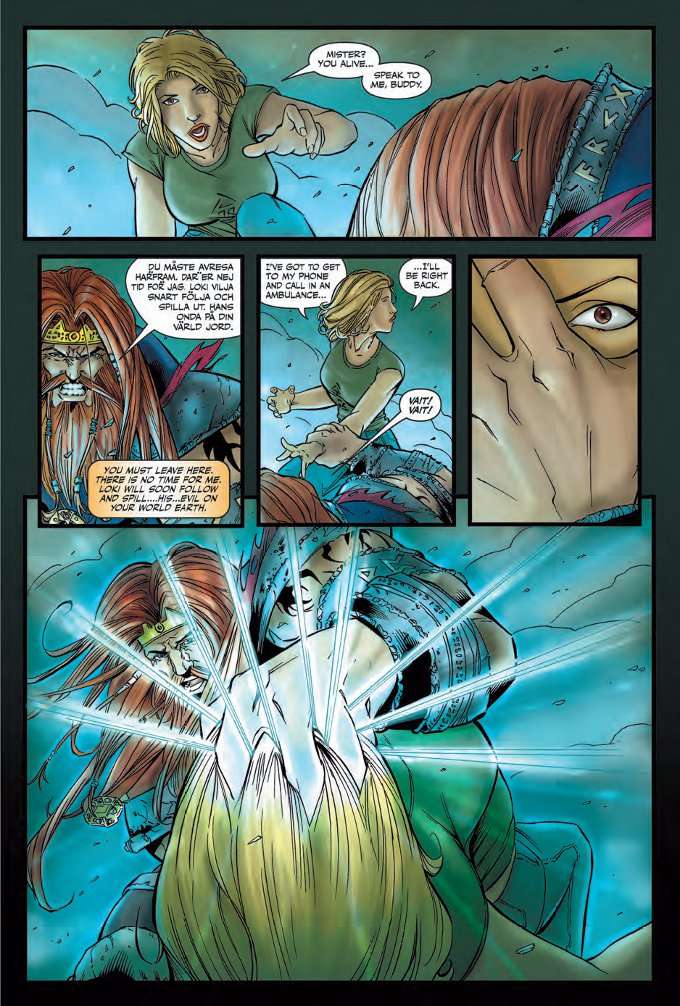 Who is this viking?  How did he get here?  And what is he doing to Susan in the last panel?

The next page cuts - without exposition or even a caption box - to Asgard.  More specifically, what appears to be the Hooters of Asgard, if the number of scantily-clad maidens in chainmail tops and silken loincloth skirts is any indication.  Here holding court is Odin - All Father of the Norse gods, Wisest of the Aesir and inventor of the two-drink minimum.

In fairness, given Odin's hall Valhalla is paradise for male warriors in Norse Mythology, depicting it as a hall filled with endless ale and scantily clad wenches is a perfectly valid artistic choice.  What I object to is the one woman warrior we see (who is never given a name in this whole issue) wears an outfit that provides only slightly more coverage than that of Odin's dancing girls.  She has a plate-mail bra, shoulder pads and half a plate-mail skirt.

She is badgering Odin about an impending attack on Asgard and the need to be wary.  He dismisses her concerns and tells her to relax, for he is about to bestow the titular Power of the Valkyrie upon her.  But every party needs a pooper and that's why Loki invited himself. 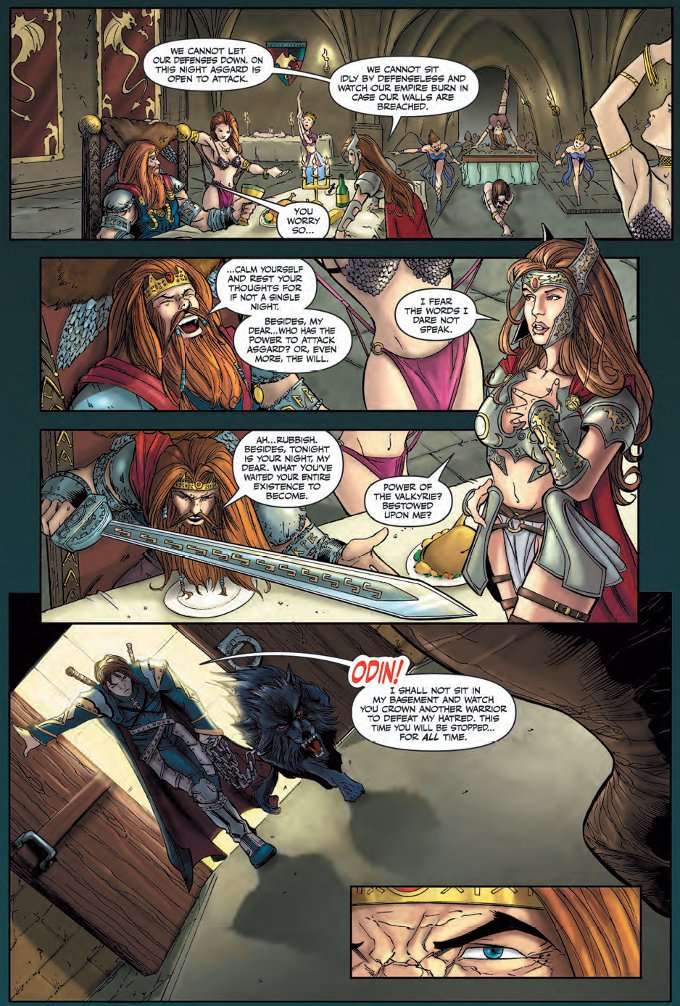 Quick Side Note: Am I the only one faintly amused by the image of Loki living in the basement of Valhalla, like some perpetual man-child, sponging off his parents for as long as they'll allow him to live there rent-free?  I hope not.  Because that's the one bit of enjoyment I think anyone can find in this book.

Anyway, before Loki can so much as do anything tricksy or shapeshift into something dangerous, an unnamed magician teleports Odin away from Asgard.  He then taunts Loki, reminding everybody of his bastard heritage (Umm... so why is Odin letting him crash in the basement then?) saying he'll be dead before he finds Odin.  Loki kills the sorcerer and that's that.

We actually do get an answer to that last one, but it comes later.

Back on Earth, Susan wakes up in her bed, having vague recollections of a weird dream.  There's more bad artwork that attempts to give us fan-service of Susan in a tank-top, panties and gym socks.  Nothing much happens in this scene, so I'm just going to skip it.

Cut to Loki, suddenly appearing somewhere in the same city.  A murder of crows fills the sky above him as he manifests.  A horde of rats run before him.  Alongside him walks a wolf on a chain-leash.  Somehow, a SWAT team just happens to be passing by and set up around Loki in the one minute he's been on Earth. 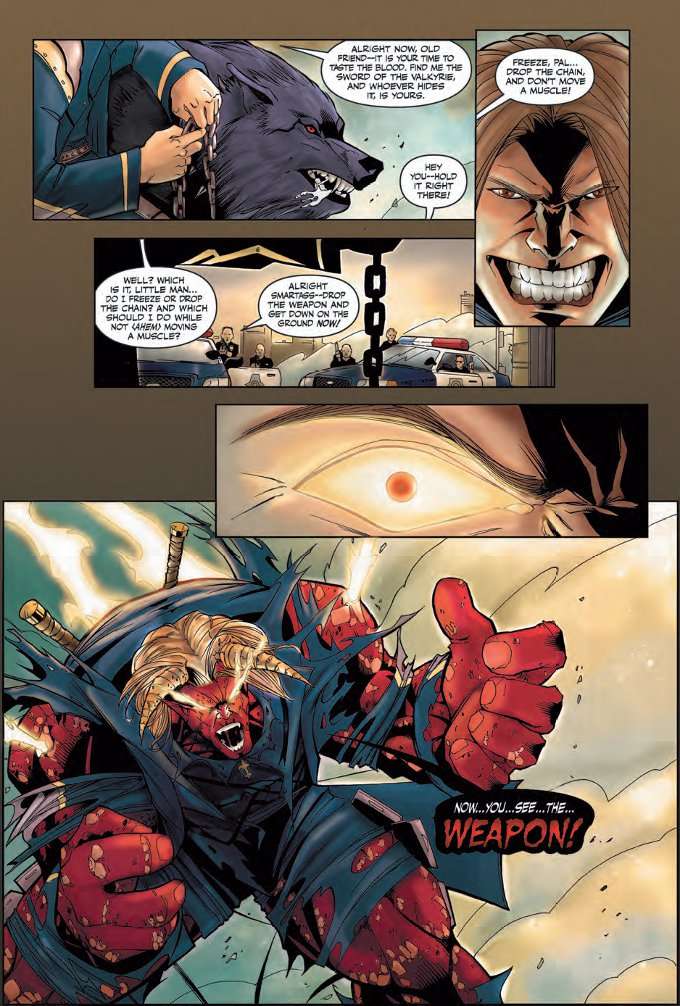 The god of deception and trickery, Ladies and Gentlemen!

Granting that American comics don't have the best track record for accuracy regarding depicting Norse mythology, even the relatively more hot-headed Loki of Marvel Comics isn't this showy.  Tom Hiddleston is more subtle than this.  Hell, Tom Baker is more subtle than this.  This Loki's idea of a subtle plan would involve several marching bands, one thousand dancing elephants and Brian Blessed with a megaphone shouting "LOOK AT OUR SUBTLE PLAN!"

In the midst of Giant Demon Loki tearing apart the cops, the unnamed warrior woman from earlier shows up and suggests a much easier way of tracking down The Power of the Valkyrie.  Somehow, she can sense the power and the sword that it is contained in.  Using her connection, they can track the Power with far more subtlety than by having giants rip apart squads of cops.

Why is she helping Loki?  Good question.  Wish I had a precise answer but apparently they've been working together, plotting to overthrown Odin for a while now.  At least this explains why she didn't run Loki through earlier when he came in and threatened Odin.  Except... if she was working with Loki the whole time and this Power of the Valkyrie is so awesome that Loki could use it to overthrow Odin, why did Loki interrupt the unnamed woman warrior's induction ceremony?

What does God need with a starship?

Anyway, Susan is getting ready to leave for work when she's approached by a handsome looking guy in a suit (Loki, in disguise) who just smiles at her.  She ignores him, mutters about how he's obviously having a better day than her (Susan's kind of a miserable wretch, in case you haven't noticed) and then... well, I'm at something at a loss as to what happens on this next page, to be honest... 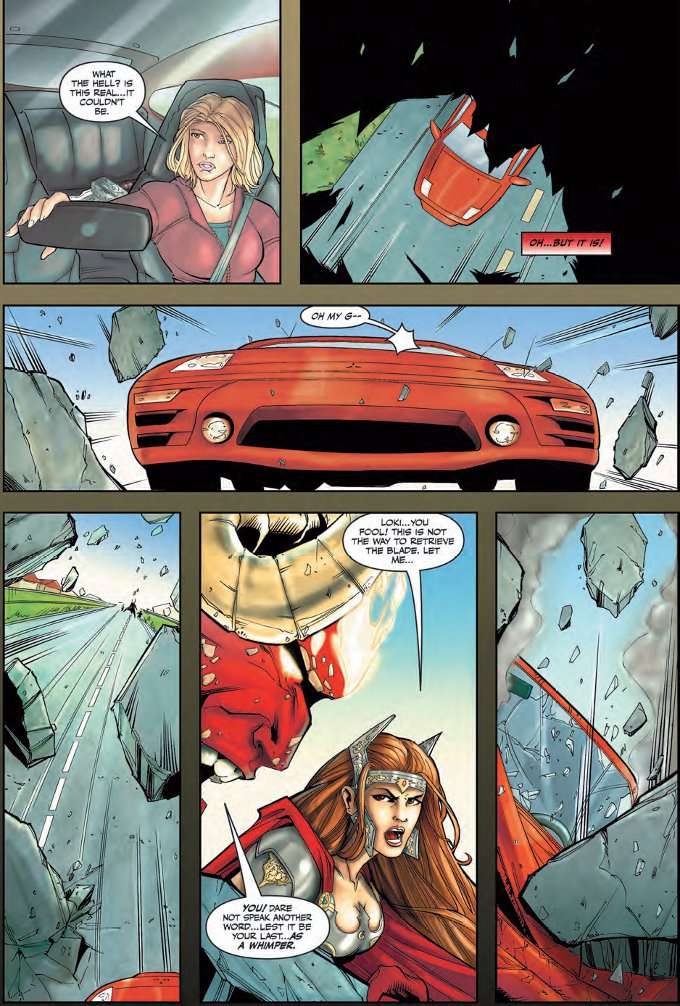 What just came out of the sky?  Why did Loki switch back to the giant demon form?  Why are we suddenly on a country road when we were in the city one page ago? 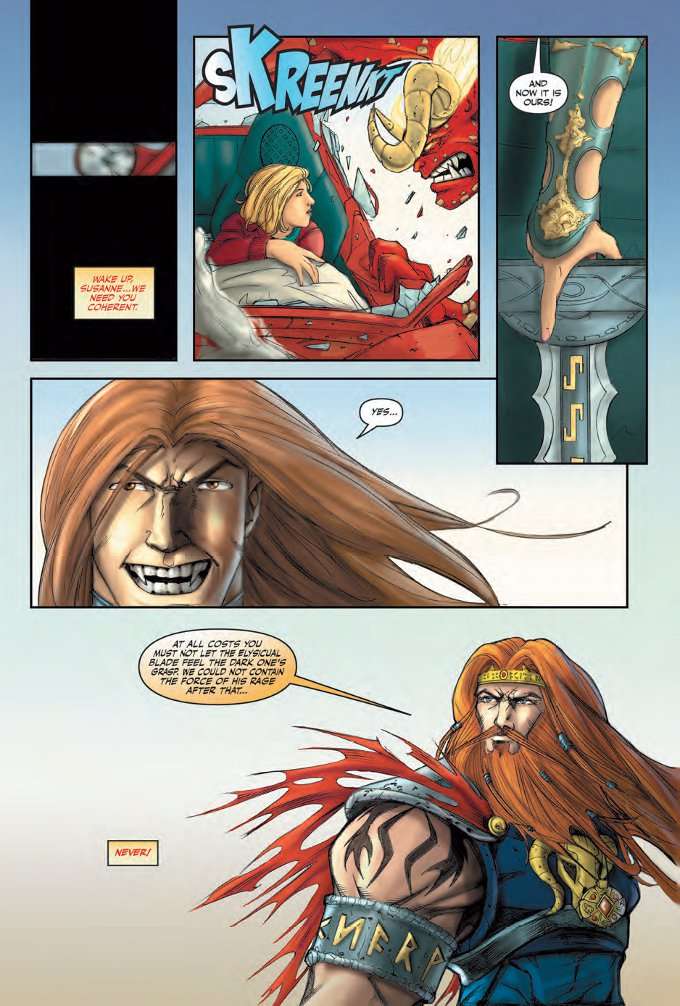 Why is Susan suddenly being called Susanne?  Why does Loki suddenly change back to his human form just to say "Yes"?  And why am I asking you? 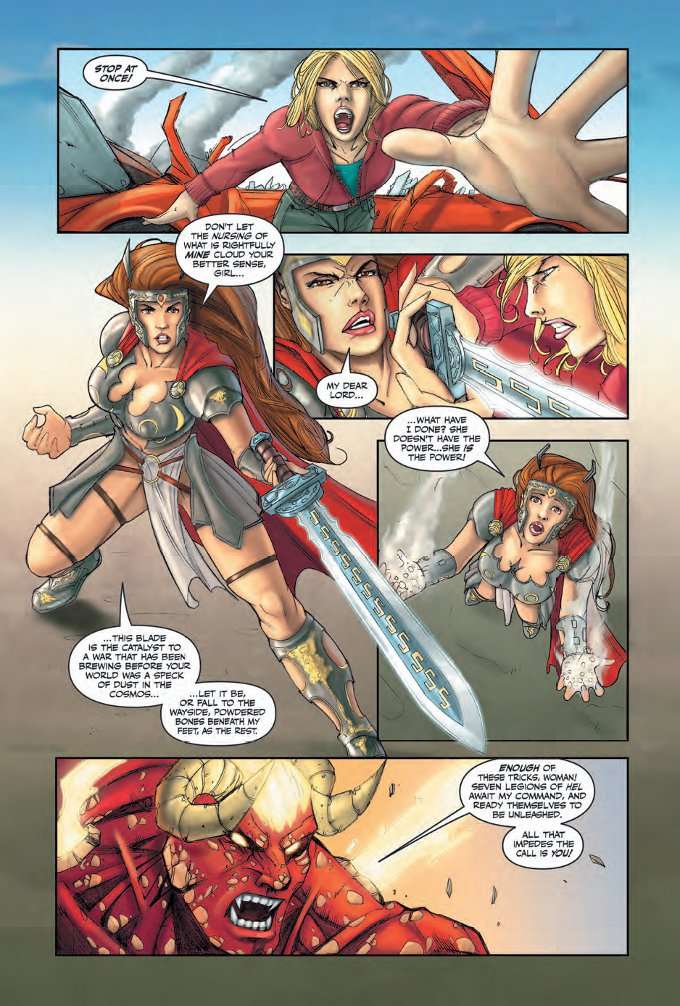 Okay.  So the nameless woman tries to take the sword but it burns her hands, despite The Power being in Susan now rather than in the sword.  Loki changes back to the giant demon, smites Susan and then.... suddenly her spirit goes all She-Ra.. 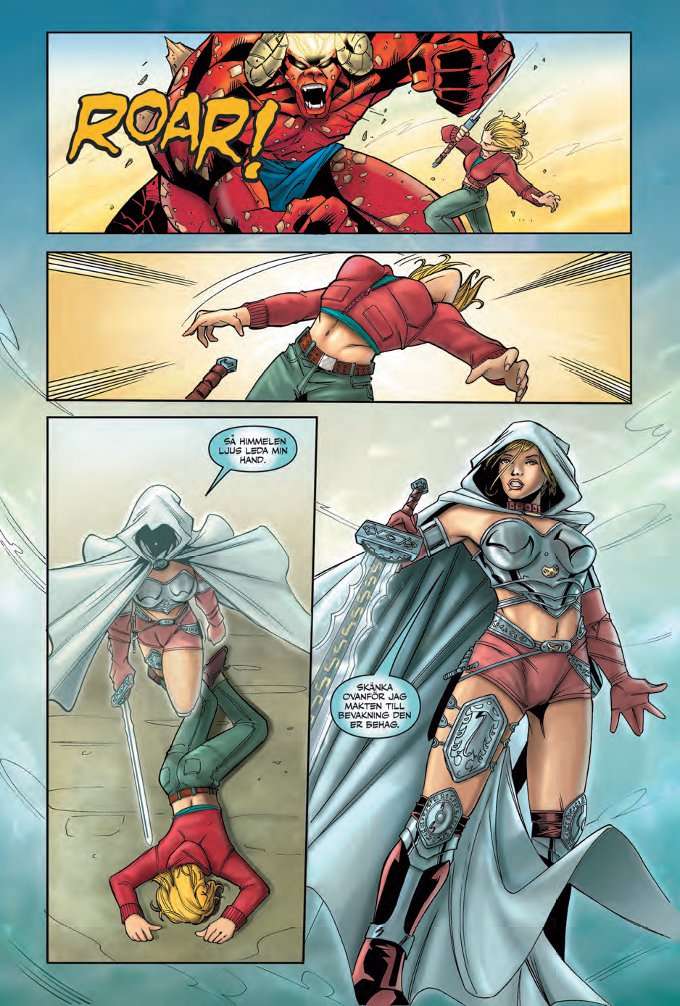 Now clad in a steel corset and steel-belted hot pants, Susan/Susanne summons forth a bunch of other women in impractical armor and... I dunno.  Profit? 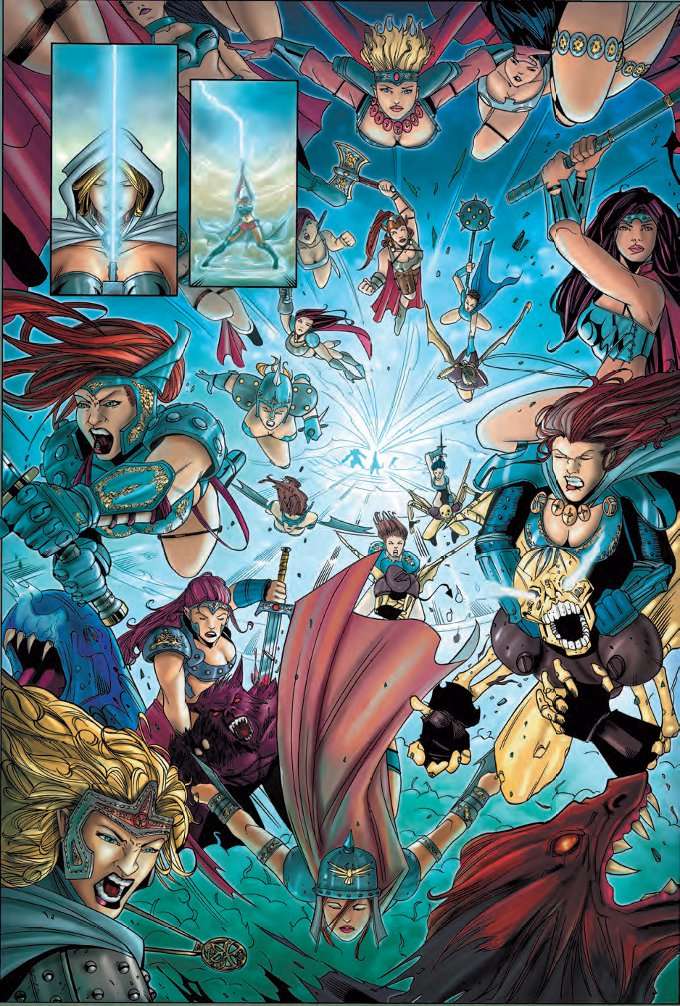 With the turn of a page, Loki and the unnamed warrior woman are back in Loki's basement apartment.  She complains about how she's disgraced herself and been branded an enemy of Asgard.  Loki basically tells her to stop her whining and says the war is not over yet.  So ends the book. 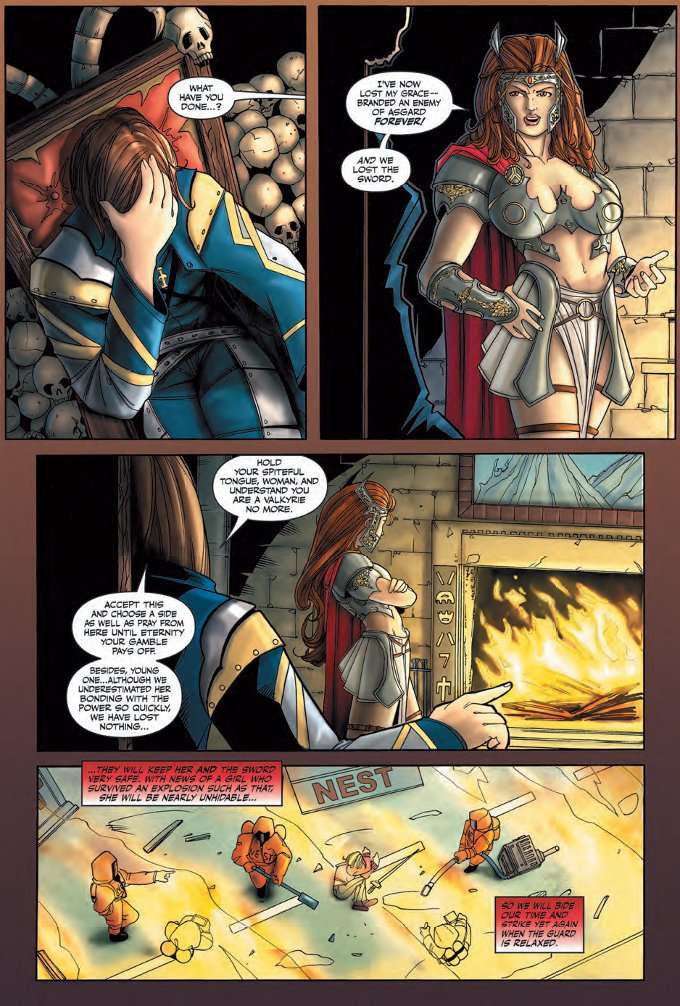 I'd say I look much the same as Loki in that first panel right now, but no face-palm is big enough!

This comic... well, you can see for yourself.  It stinks.  The plot is nonsensical.  The script changes the name of our heroine halfway through and and can't be bothered to name our villainess.  Not that it matters when their characters are so shallow.  The artwork is sub-par, lacking basic consistency or the ability to tell a coherent story.

You know the worst part?  This series continues on for three more issues.  And it's not even the worst thing I've ever read that Bluewater Productions spawned!  But I'm getting ahead of myself.  And I'm unsure yet if I'll be swimming in the mire of Bluewater again after this.